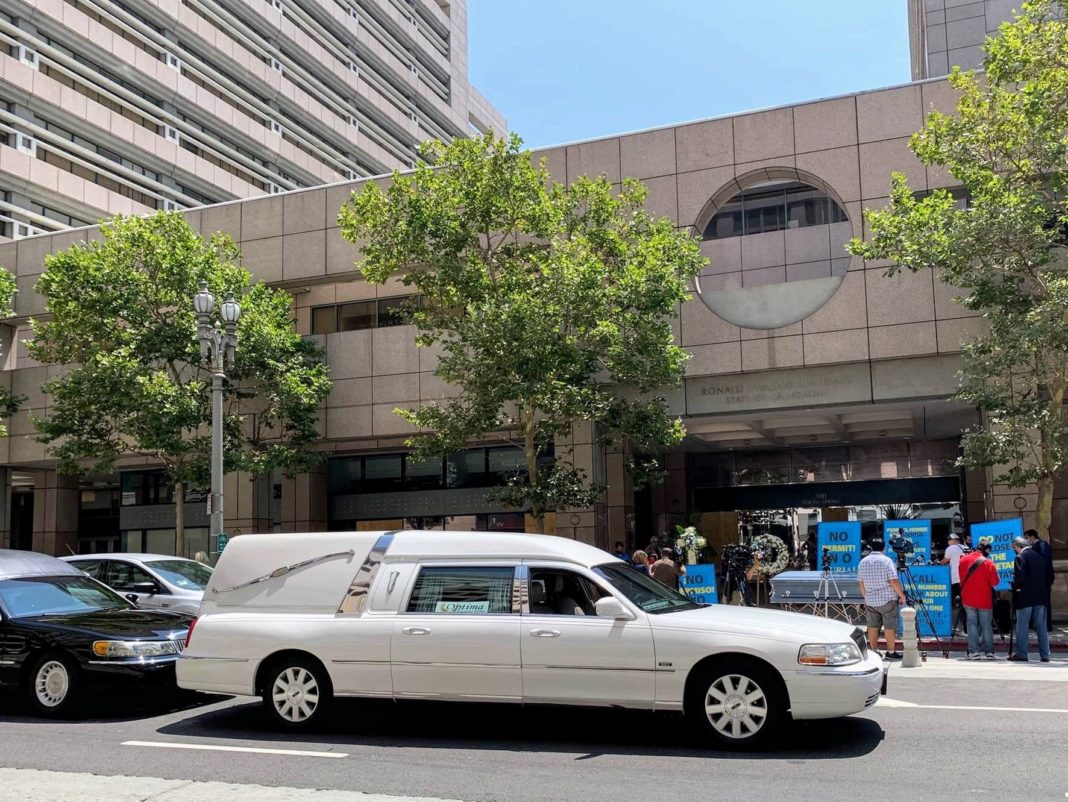 Representatives of the service indicate that the paperwork, for the repatriation of bodies, went from days to more than four weeks

More than a dozen funeral home representatives joined in protest in downtown Los Angeles on Friday to ask state and local authorities to provide them with the help they need to function effectively.

Although they are allowed to offer their services to the public, they indicated that it is taking too long to process the documentation of the deceased who are going to be repatriated. And that a process that used to take only a few days, now takes more than a month or two.

The bodies are in the funeral homes and the relatives are desperate. What’s more, some establishments have been forced to rent containers to put the bodies that have been waiting for more than a month.

They allege that the delay occurs because all the offices that perform these services are closed to the public and the documents have to be sent by portal mail.

Hugo Sánchez Laurel, owner of Optima Funeral Home in South Los Angeles, said that families sometimes think the funeral home is not doing the job properly, but they too are hands tied while waiting for documents by mail.

“Once the cause of death document has been registered, we send for the death certificate. Before we went physically, now it has to be by mail [regular]Laurel said.

The most worrying thing about email processes is that they are not completely secure, they say.

Laurel said that on May 20 a person died and they sent San Francisco to authenticate the death certificate.

“When they returned it to us, it was lost in the mail,” he said. “Meanwhile the person [fallecida] is in our care. We have all these cases in our funeral homes. We are to the point that we can no longer process more cases. ”

Magda Maldonado of Continental Funeral Home, located in East Los Angeles, said that relatives of the deceased constantly call them asking their relative to repatriate him.

“I think there should be more options for [que las funerarias] help families because they are already suffering enough, “said Maldonado, who has been in this field for 40 years. He adds that it is the first time that he has encountered a problem of this magnitude.

Irma Monzón said that her sister, Cora Monzón, passed away at age 62 on June 22 for reasons unrelated to the coronavirus.

To date, she says, the body continues at the Paramount funeral home because they have not been able to complete the process with the documents to repatriate her to Guatemala.

Irma said that initially they had told her that in 15 days the process would be ready but the funeral home did not expect the delay of so many weeks either.

“My relatives there are worried, sad and continue to wait … We ask the authorities to please take into account our grief, our pain, that we feel dejected by everything that is happening.”

Funeral homes present asked California Governor Gavin Newsom as well as the city and county of Los Angeles to make an exception for funeral homes to complete these procedures promptly.

They ask that downtown Los Angeles offices install a mailbox where funeral directors can go in person and drop off documentation. In the same way, return and collect them to save the delay of the postal mail.

“We demand that they recognize us as essential entities and treat us as such,” said Laurel. “This can be solved simply by putting a mailbox in each of these entities.”

He said it is illogical for them to want to put funeral homes on hold as well as the general public when government offices know that funeral homes work differently.

“It’s like saying to the doctors, ‘You can ask for syringes but they must do it by mail … We need government help.”

Funeral home representatives also asked the general public to call the Board of Supervisors office at 1 (213) 974-4111 to request faster service at funeral homes.

The Opinion requested a comment on the matter from the secretary of state’s office but so far, no response has been received.

Suspected of murder and robbery shot dead after facing officers at...