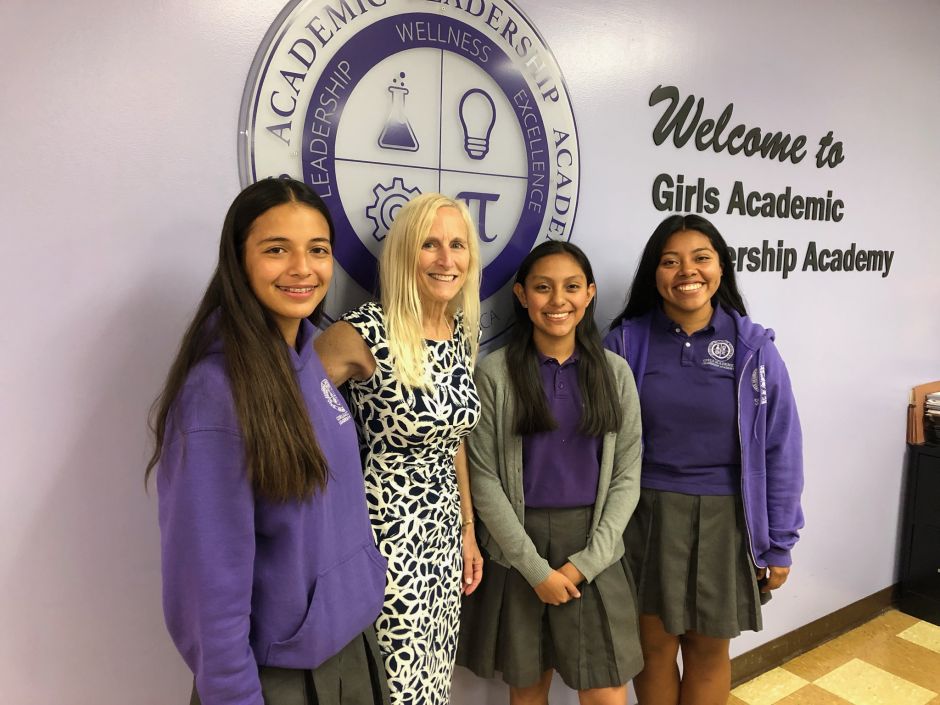 "It's a historic moment for all women," they said about the professionals they see as a role model

Excited, and regardless of whether they had to arrive at their school before 4:30 in the morning, about 50 students from the Mid-Wil-shire area arrived at their school on Friday to witness the first spacewalk from a team of NASA astronauts made up of only women.

The students of the Academy of Academic Leadership for Girls, Dr. Michelle King School for Science, Technology, Engineering and Mathematics (GALA) watched with enthusiasm – and through images transmitted live by the National Aeronautics and Space Administration (NASA) – when Astronauts Christina Koch and Jessica Meir were leaving the spaceship.

The moment was worth admiring, since after 220 extra vehicular missions in the International Space Station (ISS), for the first time the astronaut team that traveled was only women.

On all previous occasions, they were only men or a man and a woman.

“It was very motivating to see them, but it was also a bit of a shock to know that (even) in 2019 is the first time it happens (such a trip) with a team of women only,” said Juliette Urteaga, 17. "We learned a little more from the work each one does."

Her classmate, Emily Lopez, said that seeing the walk motivated her to realize that she can do whatever is decided.

"Now I know that if I want to be an astronaut in this large field, and dominated by men, I could be accepted," said the young woman, of Mexican and Central American roots, who aims to study biology.

Brittany Hansen, also 17, stressed the importance of this walk that perhaps 10 years ago would not have been possible.

“This motivates me to see that I can do what I want, like studying a career in a field dominated by men,” added the young woman, of Guatemalan roots and who dreams of being a doctor.

The school's principal, Elizabeth Hicks, said yesterday that at the beginning the conversation of seeing the astronaut's historical walk live began as an informal invitation among the robotics and engineering students.

"We did not expect so many to arrive but it was very exciting," he said.

“Everyone is doing something related to robotics, engineering or biometrics, which allowed them to understand some of the things they were doing and saying the
astronauts. "

Koch and Meir went on a mission to replace a battery charge / discharge unit (BCDU) that failed after they were installed last October 11 in the outer structure of the station, NASA said.

The BCDU regulates the amount of charge that is put in the batteries – which contain lithium ions – since they collect energy from the solar panels to give it to the station.

This spacewalk was Koch's fourth and Meir's first.

The moment of greatest happiness came when, to the amazement of the students, one of the questions that the students sent to NASA via Twitter was chosen to be answered live.

"Why were you counting how many times you unscrewed the screw?"

"They were told that it was to maintain a (kind of) brand and, for example, in a year remember," said director Hicks.

She added to be amazed to see that the students did not lose sight of the transmission to see the work of the astronauts.

"They worked so well in a team that this teaches students that we can all do exceptional group work," Hicks said.

The GALA school has about 550 students from sixth to twelfth grade and is made up of almost 78% of students of color. In addition, it is the first STEM women's school in the entire Los Angeles Unified School District (LAUSD).

Student Juleitte Urteaga, of Peruvian and Lebanese roots, said that after seeing the astronauts' walk, she felt empowered.

“I will always remember this experience,” said the student of the last year of high school.

“Seeing this made me very happy. I feel it is a moment of historical celebration for all women, ”added her partner Emily Lopez.

The spacewalk of the astronauts was originally scheduled to take place in March this year but was postponed because there were no more uniforms to suit.

Women have been doing spacewalks since 1984, when Russian cosmonaut Svetlana Savitskaya did one in July of that year and NASA astronaut Kathryn Sullivan did another spacewalk in October.

It's official: E2, L and F visas are shortened

Win 2 places for Paris! The Show in Washington on October...