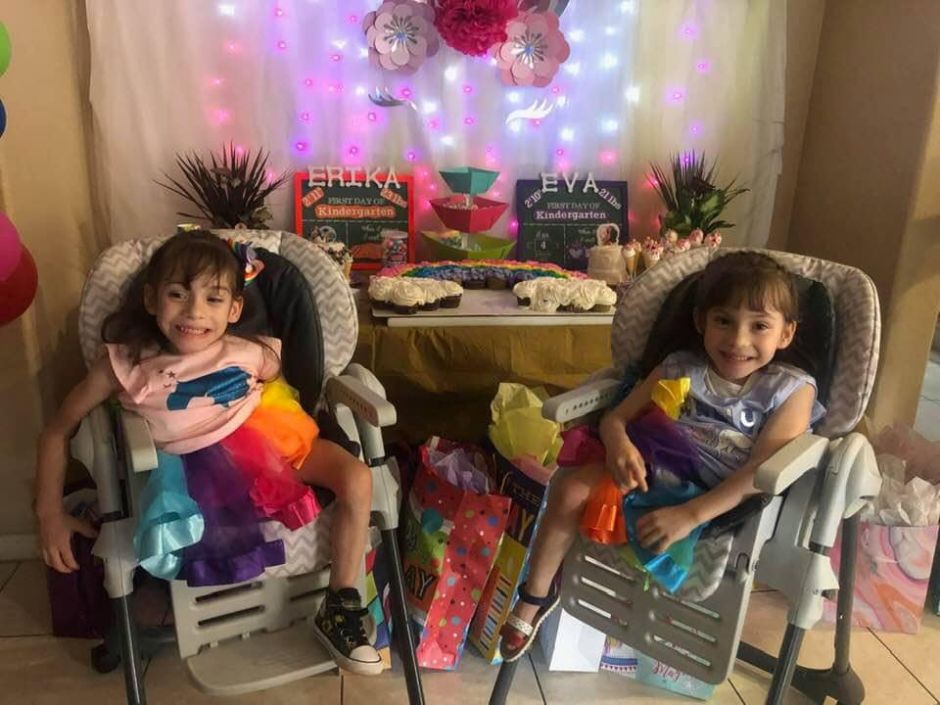 Erika and Eva Sandoval were born stuck from the chest down; today they grow healthy in Sacramento after challenging medical forecasts

This summer, Eva Victoria and Erika Rose Sandoval, the sisters who were born glued to a rib, turned five years old and started going to kindergarten. Two years ago they were separated and with the help of a prosthesis and a walker they lead a healthy and independent life with their family in Sacramento, California.

They were born on August 10, 2014. They are daughters of Arturo Sandoval, a Mexican immigrant; and of Aida Sandoval, a Hispanic born in Los Angeles.

The couple already had three children, Aniza now 29, Esmeralda 27 and Emilio 23, when they discovered that another child was coming.

“At that time, the youngest of my children was 18 years old. I was 44 when I realized I was pregnant, and I was already five months old, ”he recalls.

The news filled her husband and three children with happiness.

"We were all very happy," says Aida.

A month later when he was six months pregnant, he was told that they were expecting twins.

But when his doctor told them that his twins were stuck, Aida had the world on him.

“From the impression I fell into the hospital bathroom. I felt no strength to stop, ”he recalls.

The next day he returned to the hospital. “I already had everything ready to operate and get the girls out. I felt betrayed because they hadn't told me anything before. According to doctors in Sacramento, the prognosis is that girls would not be born well; or that I was taking risks myself, ”he says.

Aida states that she flatly refused to lose her daughters. "If God gave them to me, I will fight for them," he says.

However, he admits that the first weeks were very difficult because he could hardly sleep thinking about how to tell his children. "It was pure to cry," he says.

It was his sister-in-law Tonia Pineda who made her life easy and was with her always encouraging her, and making her laugh.

As soon as he recovered from the impact of the news, he contacted the Lucile Packard Children's Hospital in Stanford where his daughters were born.

“They didn't introduce me to them until two days after they were born. I was very happy to know they were crying and breathing, ”he says.

Erika and Eva were born glued from the rib to the pelvis, and with three legs. "The third leg was like a butterfly that was shrinking," recalls his mother.

Outside of being united, the sisters were born very healthy. Each had its liver, stomach and ovaries. Each one was left with a kidney, and each has only one leg.

"They brought much joy to our lives. They were always smiling. Erika liked to sing; and Eva didn't know how to do anything other than smile. They crawled like they were a crab”, He observes.

Aida and her husband Arturo decided to separate the girls when they turned two. “There are many parents of Siamese children who prefer to wait until they turn five. We didn't want to wait because we investigated that a late separation affects them a lot emotionally, ”he explains.

He also says that as they grew up, Erika was shrinking.

Erika and Eva were separated at Stanford Hospital on December 5, 2016. “The doctors thought they were not going to be able to sit because each one has only one hip, but three days after the separation, Eva sat alone. The doctor could not believe it, ”says Aida.

Almost three years after her daughters were separated, this mother feels very grateful for having them in her life.

“We have had very difficult moments, but prayer has brought us forward. Praying is very powerful, ”he says.

In these five years of her daughters' life, she says she has felt very proud of all her children. “They have sacrificed time from their work to be with them. My son wanted to learn to move them, ”he says.

And he recognizes that there have been bad and very heavy days. "But if these girls have taught me something, it is not to complain and to be patient," he says.

Aída was not very convinced that her older children opened a page on Facebook dedicated to Erika and Eva for fear of receiving negative comments. But the opposite has happened: “The love we have received from people we don't know has been surprising,” he says happily.

The girls started kindergarten in August. “They love it so much that the happiest day of the week for them is Sunday because Monday is approaching to return to school. They are very intelligent, ”says his mother.

Erika likes everything as a child and demands more affection from her dad; and Eva, on the other hand, wants to be a princess, wear dresses, and feels the mother of her little sister, as her father talks.

Aida talks that only God knows why he sent them two Siamese girls when their three children were already adults. “What I can say is that they have brought a lot of happiness to our home. It is amazing to see everything they have achieved, ”he says.

Zaz: "I feel the need to be bored"

Doctors show sensitivity but don't give in

The "Next40" seen from the United States, what's the point?