Home Latest News In the center of Los Angeles, cleaning workers protest and say: ‘the... 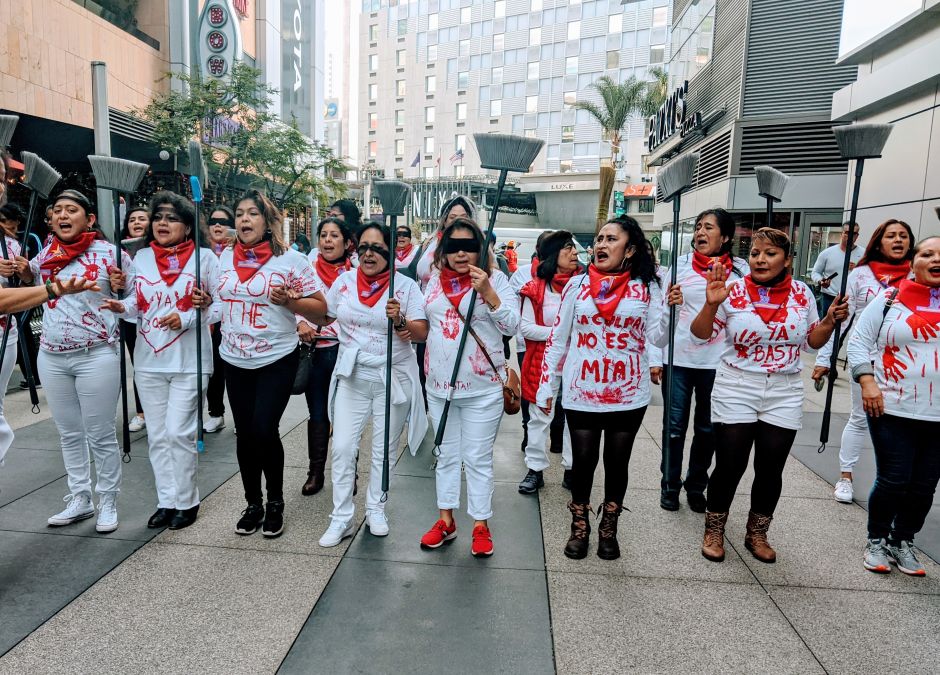 Dozens of Latina women and mostly immigrants, joined the global movement against sexual abuse and harassment

Dozens of women with brooms in hand, and some blindfolded, protested Thursday at noon in downtown Los Angeles. They noted the sexual harassment and abuse that custodians receive from some of their employers and contractors.

Their white shirts and pants were stained red, as an example of the blood that has been shed for the violations of the workers' human rights, as well as the sexual harassment and abuse that some of them have faced.

This movement was the support for a protest that occurred on November 25 in Chile, when a group of blindfolded women made viral the hymn entitled "A rapist in your path", where the phrase "the rapist is you," he accused to everyone who ignores the abuse of women.

In Los Angeles the protest brought together dozens of janitors and supporters at the intersection of Figueroa Street and Olympic Boulevard, where they closed the intersection for a moment and eventually walked towards the esplanade of the L.A. LIVE while repeating sentences against the abusers.

The women made a brief stop in front of the Starbucks of L.A. Live where they put green aprons with the logo of the company and sang at the top of their lungs, emphasizing that the company is one of the corporations that hide the abuse.

On its website, the Starbucks company specifies that as a global company, they are subject to the highest standards of ethical conduct and behavior.

"The Standards of Business Conduct help us make decisions in our daily work and show that we take our legal and ethical responsibilities seriously," explains the company.

Carmen Sánchez, 42, said she participated in the demonstration because she does not want young people to suffer what some workers who are afraid to talk have suffered. She added that a few years ago she faced violations of her rights as a worker, since one of her bosses once harassed her all night while she cleaned her office.

“He offered me a job if I went out with him and since I ignored him he never hired me again,” said Sanchez, who at that time was afraid to report the harassment. "It was lack of information, I didn't know what to do."

Verónica Lagunés, 41, said she also suffered constant harassment while cleaning an office in a building in downtown Los Angeles.

"The tenant took pictures of me while I was working and once he printed one of the photos and put them with bills around," said Lagunés who tried to stop the harassment without success.

“When I reported it they did nothing (the supervisors) and they moved me from the floor, but in the same building,” added the Salvadoran woman. “For a long time I spent thinking about what would happen if I found it somewhere in the building. If I was afraid. "

The song "A rapist in your path" calls for powerful institutions that defend the systems that oppress women, and in this case the janitors called the powerful owners of buildings that allow these working conditions to persist.

The empowerment anthem and choreographic dance has helped the song become a viral sensation with performances all over the world, from Costa Rica to Mexico and to India.

In Los Angeles, the cleaning women said they felt empowered by the song and especially the PBS Frontline documentary “Rape on the night shift,” which shows how janitors — primarily immigrant women — who work at night, isolated and alone are vulnerable to sexual predators.

Alejandra Valles, spokesperson for the US-Service Workers West (USWW) union that represents the janitors, said women already have the courage to raise their voice against building owners who ignore these inappropriate actions.

“On this issue of #Metoo people think that it only happens with actresses, but in reality the night shift cleaning workers suffer a lot and many have not had the courage to speak,” said Valles.

He added that the movement that began in Chile was very motivating for all women not to be afraid to betray the aggressors.

"It was very inspiring as it is a way of solidarity and calling for action to be seen in the face of other women, who are often considered invisible," said Valles.

Martha Mejía, who suffered harassment at work while cleaning Disney company offices in Burbank, said that after giving away her stalker she was fired from her job; however, she received support from her union with psychological and resource assistance.

“Now we are part of a group of certified teachers who can inform other workers about their rights,” said Mejía. "The Chilean movement made me feel powerful and know that together we will be stronger."

The California custodians and the SEIU –USWW union recently celebrated the approval of AB 547, the Surviving Concierge Empowerment Act, which requires cleaning contractors in California to provide education on sexual harassment and assault on the job.

This law is considered the most progressive within the #MeToo movement and is considered a historic victory for immigrant women of color, who now have a powerful way to help transform the cleaning industry.

Why does health cost so much in the United States?

The City of Long Beach approves the initiative to close streets...