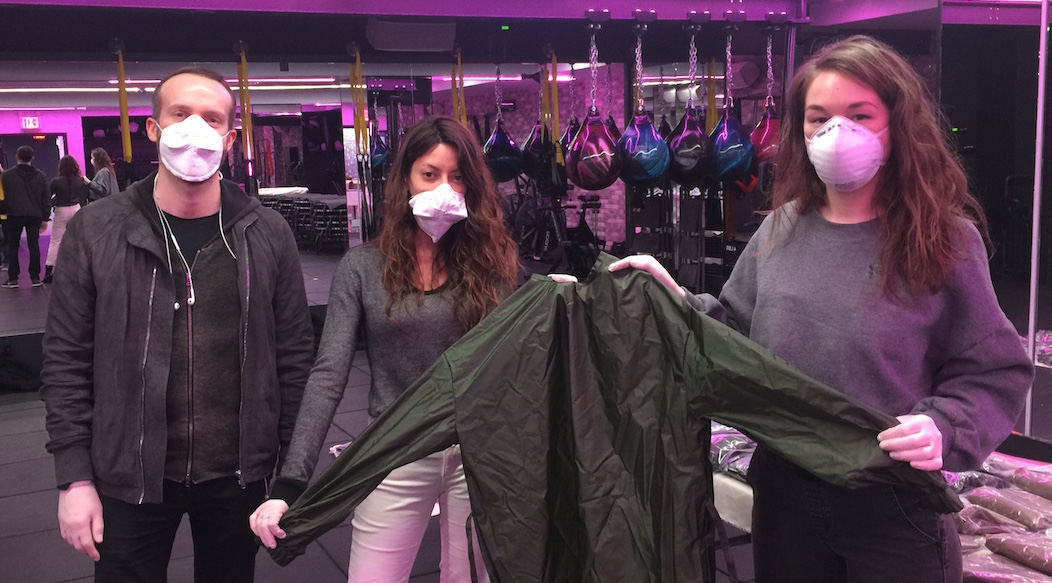 To support Garment District For Gowns, the GoFundMe page

At the start of the afternoon, entrepreneur Benjamin Chemla is driving in a slow-motion New York. In the car, his fiancée Rachel Rothenberg-Saenz and one of his colleagues, Amy Tiefermann. With Alexandra Baylis, one of their colleagues at designer Oscar de la Renta, the two women are the founders of Garment District For Gowns, an initiative that aims to manufacture and equip caregivers with medical outfits, equipment that is still sorely lacking. New York. The happy team must quickly reach a large Crown Heights hospital to deliver a box of clothes. “We are tired, but we know that this fatigue makes a difference“, Says Rachel Rothenberg-Saenz.

Benjamin Chemla found himself embarked on the adventure after falling ill from the Covid-19 in mid-March. After deciding, with “39.8 degrees fever“, To close his two FitHouse gyms and set up online sports sessions, this serial entrepreneur, pioneer of last-mile delivery in France (he notably founded the Stuart delivery platform in 2015), put his instincts at the service of his partner's project.

Calls to the FDA, identification of needs, deliveries: the thirty-something, endowed with anti-bodies resulting from the virus (he has been tested), spares no effort. “When my fever subsided, I said to myself: in ten days, you will be cured. How can you put yourself at the service of society?, he remembers. I looked at the plasma donation or the possibility of making deliveries with Invisible Hands. The world was at a standstill. There was no business. I was not allowed to stay at home. "

He and his fiancée will decide to start producing protective suits after a press conference by New York State Governor Andrew Cuomo. “He said that the need for medical gowns was estimated at 20 million but that the state only had 145,000 in stock. ”, he explains. A cruel coincidence: the day a GoFundMe page intended to finance the operation was put online, he discovered images of Mount Sinai nurses forced to carry trash bags to protect themselves, due to the lack of suitable equipment.

Thanks to the contacts of his fiancée and his colleagues, the operation is set up. The founders get their hands on rolls of waterproof and reusable fabric normally used by the army. They mobilize 60 dressmakers who agree to do the assembly at home. But faced with the logistical challenges of the business, they decided to turn to the workshops in the Garment District, near Union Square, and reopened three cutting and sewing workshops in this district known for making clothes. In total, the production chain mobilizes around 140 people, including two other workshops in Brooklyn and Baltimore.

Before delivery, the outfits arrive at FitHouse premises in Union Square, where they are packaged by volunteers in the midst of the dumbbells. “It’s great to see this closed place come back to life“, Explains Benjamin Chemla, who had to put his fifty employees on partial unemployment.

Today, Garment for Gowns is running at full speed, but still wants to increase production to 30,000 blouses per week (100 times more than their initial series). The team supplies major New York hospitals and retirement homes. The founders were even contacted by the American SPA, the RSPCA, which also lacked equipment.

Benjamin Chemla makes deliveries several times a week. “There is a mismatch between the size of these hospital clusters and the fact that they can have hundreds of caregivers without overalls. They will also reuse the same mask. Sometimes I feel like I'm in the Middle Ages, he says. But that doesn't stop them from always being very smiling, very human“. The needs remain significant. “It doesn't slow down at all. We always have a lot of requests. Staff exposure to Covid-19 remains the same. We are on two months of necessity. The outfits must be constantly renewed“, He emphasizes. Garment District For Gowns also wants to continue production to replenish inventory for a possible second wave of contamination. “Every outfit we make, explains the Frenchman, it’s one less garbage bag for medical staff“.

To support Garment District For Gowns, the GoFundMe page

Los Angeles bars and restaurants will be able to sell wine...