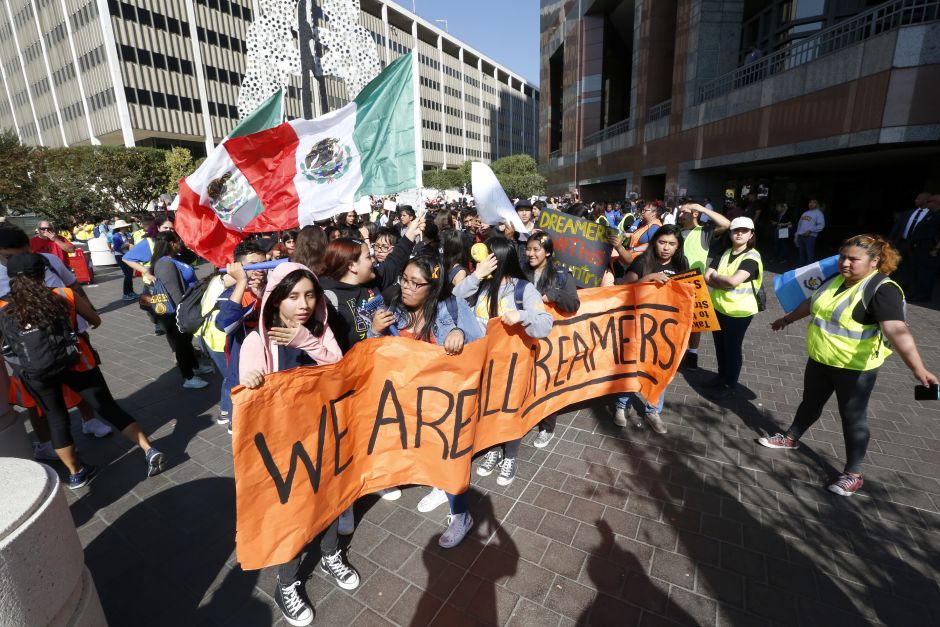 As never before, hundreds of secondary school march and demonstrate in support to continue this immigration relief

Hundreds of students from at least ten high schools in Los Angeles left the classrooms to march and demonstrate in support of the permanence of Deferred Action for Childhood Arrivals (DACA).

The student mobilization took place at the same time that the Supreme Court of the Nation heard oral arguments to decide next year if they support the decision of the Trump administration to end the DACA, a program that has prevented the deportation of almost 700,000 undocumented immigrant youth and He has granted them a work permit.

Katly Gutierrez, a 17-year-old student from El Camino Real High School in Woodland Hills joined the demonstration and marches in support of DACA. His own mother is a beneficiary of this program.

“My mother is 31 years old and is DACA. She could not come because she is working, but I am here representing her because it is not fair that they want to remove these protections. Without DACA I could not have brought food to our table, ”he says.

The students arrived around 11 am at the demonstration held in the federal building in downtown Los Angeles.

Guadalupe Hernández also 17, a 12th grade student at Garfield High School in East Los Angeles, says she decided to go out and support all DACA boys because she wants this program to continue. “I was born here, but I have DACA friends. I have come to manifest and march for them. ”

Yesenia, who asks not to reveal her last name, goes to grade 12 of Garfield High School. "DACA students deserve the same rights as those born here," he says.

And he has a close friend who does not have papers that he does not know if he will be able to go to school. "We do not know if President Trump is going to remove DACA, and if they are going to be able to achieve their dreams," he says.

Yesenia is confident that not all teachers supported them to go to the march in support of the DACAmentados.

"Some do; others told us why spend time on a march. We go out because we want to be heard, ”he says.

Esmeralda Vélez, is another young Garfield student who decided to miss classes in solidarity with young people benefiting from DACA.

“I know that I have many privileges to be born here, and that many do not have the opportunity; but this land is for everyone, ”he emphasizes.

Esmeralda is hit hard by the DACA issue because she has a 27-year-old sister protected by this program.

“She is a single mother who works in a clothing store. It would affect him very much if they removed the DACA, ”he says.

And he is confident that when in 2012 President Obama announced this immigration relief for all the young immigrants who were brought by his parents in childhood, life changed his sister a lot.

“I used to live in a very limited world about what I could do,” he observes.

This high school girl lives in a mixed family. “We are seven brothers. Some of us were born here, I have a DACA sister and another sister who has nothing, ”he says.

Joana Argumedo is 16 years old and attends grade 12 of Garfield High School. “I came because I know many people with DACA and I come to support them,” he says.

And he adds that it is very difficult for DACA boys. “I have come to tell you not to worry that we are all the same. They weren't born here, but we have equal rights, ”he says to quickly trust that he feels bad because he was deported to a close friend. "That hurts a lot," he explains.

Much of the students walked in groups from their schools to the federal building in downtown Los Angeles. Samantha Barrientos, a 16-year-old student was the one who organized the movement for students to leave school at Garfield in solidarity with the young DACA.

She herself has a DACA sister, so she asked the magistrates take into consideration that the beneficiaries have families and are well involved in their communities. “They are parents, brothers, they are in our community. They are our people, ”he says.

From there they marched towards the MacArthur park where a musical festival was held in support of the DACAmentados in which the Mariachi Arco Iris, the Duo Sin Color, Ozomatli and other artists participated.

Could Bernie Sanders defeat Trump? A quarter of potential voters in...