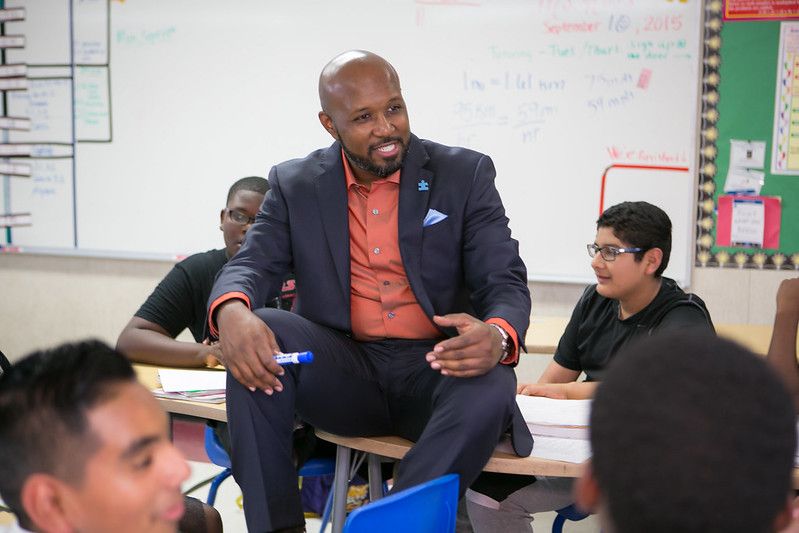 During his term as president, the young African American struggled to turn the city's schools into a sanctuary district.

The Compton native hopes to continue fighting for this equity at the local level and is therefore running for a fourth term on the board of directors of the Compton Unified School District (CUSD).

Compton is a city south of Los Angeles that has a population of more than 97,000 inhabitants. And although in the 1980s the city had 73% of African-American inhabitants, it has now dropped to 29%, according to Census Bureau data. Currently 68% of its recipients are of Latin origin.

The member of CUSD understands this change in demography and therefore assures that he will continue to support "immigrant and working families."

"(At CUSD) We believe that ensuring that every student (immigrant) has access to quality education and takes advantage of the same opportunities that brought them to the United States requires educational support and programs that reduce access barriers," Ali said in an interview with The opinion. "I am committed to providing exactly that for our immigrant students and their families."

The young candidate is proud to emphasize that during his time on the CUSD Board of Trustees, the District has increased its graduation rate to almost 90%, has reclassified thousands of students as proficient in the English language and launched a journalism program For English learners it has been a success.

Ali, who was elected as chairman of the CUSD board of directors in 2019 — a one-year term for each member — said that the same year the District passed a resolution promising to protect immigrant families from attempted raids by agents of immigration (ICE) in schools, turning CUSD into a sanctuary district.

In 2019, CUSD celebrated the first class of graduates of the Compton Early College High School program, where 100% of the students who participated – mostly Latinos – earned an associate's degree at the same time as their high school diploma. All were accepted to four-year universities.

"The Latino community is a vibrant and important part of CUSD, which provides strong family connections, pride and culture to our schools," said Ali. “I think education is the great equalizer for all the families we serve. It is a path to opportunity and a bright and successful future. ”

The candidate has also helped the District establish innovative partnerships and programs that expose students to educational and professional opportunities in science, technology, engineering, arts and mathematics.

One of the most innovative partnerships is what they have with Capitol Records, a project where students learn from entertainment directly from executives in the music industry, and even have specialized access to internships and scholarships once they graduate.

"Whether our students are newcomers or have lived here for many generations, I intend to make sure they can access the dream that all parents want for their children," Ali said.

Recognized for his work

Ali and the District's English Learners program recently received the Golden Bell Award from the California School Board Association (CSBA) in recognition of the journalism program for English Learners.

The program addresses the growing number of students with English as a second language in the District; same that follows a curriculum developed by Loyola Marymount University for students who are learning English from grades 3 to 5.

"During the 12-week program, students develop their ability to listen, speak, read and write skills through interviews, research and the exploration of journalistic writing," Ali said.

The board member was elected by voters for the first time in 2007 and says that during the last decade, he has consistently and boldly defended the immigrant and Latino communities of Compton.

If re-elected, Ali plans to expand opportunities for access to college and careers that students want through the Early College High School program.

"We know that there is no single model for student success, so we must provide a wealth of opportunities to align their education with their interests," he said.

"I also believe that immersion programs in two languages ​​could be expanded and would be beneficial to create a globally competitive 21st century workforce that is better positioned to access tomorrow's opportunities," he emphasized.

Ali said he is proud of his community and the District, and said that when he has children he will enroll them in CUSD schools.

In Los Angeles County the voting centers are already open until March 3. To find out which is your nearest center visit lavote.net

Benjamin Millepied presents again "I fall, I flow, I melt" in...

Loses control of the car, crashes and kills a person on...

Long Beach Halloween party ends with a shooting and 3 dead