Home Latest News Activists request that prison debt be eliminated from the LA County Board... 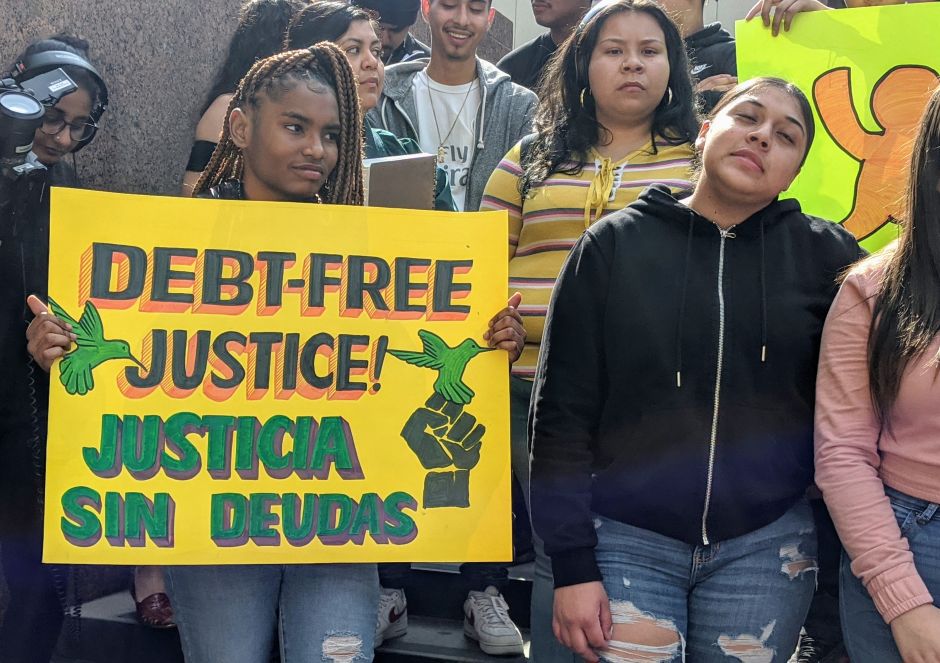 They want the board to repeal the current county laws that allow the Courts, the Sheriff and the Department of Probation to collect and collect fees for detainees.

Ana Barrera, 34, never imagined that a visit to a relative in a Los Angeles prison would involve her in economic problems beyond her reach.

Barrera said that in November 2018 he was visiting the father of his children when they accused her of an incident that, he says, did not happen.

She was arrested at the time, was taken into custody and the sheriff's department took her to the women's jail in Lynwood, where she was released on bail two days later.

"That's when all the problems started for me," Barrera said.

Barrera said she doesn't know where those extra costs came from and nobody has been able to explain. Nor has she been able to get rid of the debt since as a single mother of four children, the expenses are excessive in her home.

“I told them (in court) that because I owed so much if I had never been in trouble. I had no criminal record and it was the first time I was there, ”said Barrera. "They didn't take that into consideration."

Barrera said that when he sought legal help, his advisors did not understand what the additional "fees" and "fines" were about.

Asking for a change

For this reason, Barrera joined a group of legal activists and advocates to ask the Los Angeles County Board of Supervisors on Tuesday to finish charging fees and fines.

They ask that the board repeal the current county laws that allow the Courts, the Sheriff and the Department of Probation to collect and collect these fees.

They asked that the county reimburse families that have lost high amounts of money in these payments and support SB 144, Senator Holly Mitchell, which calls for fees and fines imposed by the state to be eliminated.

Activists say that if the person has already paid their time and bail, the extra charges only become an extension of the punishment.

They add that these fines create an economic injustice since 43% of the people who are arrested by the Los Angeles Police Department (LAPD) are unemployed, many others go out of jail and do not have stable housing; All this complicates and makes it almost impossible for people to reenter the labor system, they said.

The activists stressed that many people cannot clean their record or have access to stable jobs and housing until they pay their extra fees and fines, which could take years.

Gloria González, 24, agrees with Barrera. She is currently being affected by a probation problem facing her daughter's father.

Gonzalez said the 25-year-old, whose name was not disclosed, had a vehicle accident last year and was placed on probation for three years.

"He doesn't have to go to court or offer services, but it's very worrying because he has a $ 4,000 charge," Gonzalez said.

"He has to be worrying from month to month and it doesn't matter how he pays for it but he must do it, but if they stop him and that appears on his record, he can be jailed and he doesn't want to go back to jail."

However, this becomes a concern when the young person must focus mainly on their housing, living, transportation and other expenses, being in a hurry when paying a monthly payment that does not decrease.

Barrera said that for a long time, the unfair system has tried to finance itself at the expense of those who have been most harmed by the monetary amount of these rates.

“There really is no total price that can be placed on the emotional and mental weight that these rates placed on members of our communities.

Supervisors Hilda Solís and Sheila Kuhel filed a motion to request that the board of supervisors send a letter to the governor of California, Gavin Newsom, in support of measure SB 144.

Supervisor Solis said making these additional charges is an extra charge for the family.

"These expenses can easily go up to $ 5,000 in each case … imagine that individual who is receiving additional charges for not being able to pay his debt," said Solis, asserting that these charges seriously affect poor families, especially families color.

"While some charges are imposed by the state, others fall within our jurisdiction," said the supervisor, asking for their removal.

Figures obtained through Public Records Act They showed some of the charges they include;

Public defender and investigator fees For a felony declaration agreement: $ 305- $ 2,399

Webinar: The Consul General of France in NY answers your questions

Los Angeles Policeman was captured on video by manipulating breasts of...

Can we go through Mexico to return to the United States?

Ma Box Française, the gourmet bet of a French entrepreneur