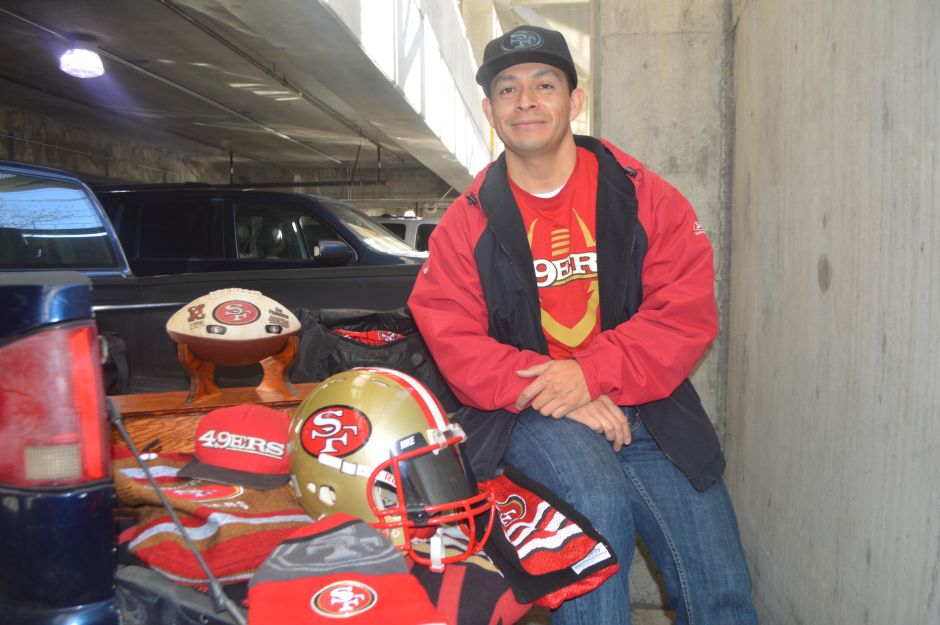 It doesn't matter if it's day or night, if it's November – when the NFL season is in full swing – or May – when the first kickoff of the year is still far away – Oscar Jiménez always carries with him some garment of the 49ers, who this Sunday will face the Kansas City Chiefs in Super Bowl LIV at the Sun Life Stadium in Miami Gardens, Florida.

“I always wear some equipment all year long, whether it's pajamas, a cap, a purse or a belt… I always have something of them, whether I'm awake or asleep, I always have them nearby,” says Jiménez, who is the driver of Bus routes 720 and 33 in the city of Los Angeles.

This fan fell in love with this sport when he was just a child and has since been loyal to the San Francisco team.

“When I started to be a 49ers fan, I was 12. At that time, nobody in my family [who came from El Salvador] liked football, so their sport was football, but being here I fell in love with that sport, ”recalls the 38-year-old man, who was born in Mexico when his parents were on their way to the US and where they stayed to live for almost five years.

"Those who managed to make fans were my brothers, because my wife and my son not much … My brothers [younger] are just as amateur as me," says Dani and Francisco Morales. "I feel like I started a tradition in the family."

Jiménez says he has an intense connection with the team, which ranges from simple coincidences to a lifestyle that helps him cope with work stress.

“I was finding similarities with me. For example, the first Super Bowl they won was the year I was born and so many connections that made me love the team, ”he explains.

“Also, my job is stressful, working with the public is very difficult and many times the games are my energy outlet. You get to see a game and release what you feel, because you scream and get excited … Sometimes you even jump. That is my way of eliminating stress and feeling better. ”

For this Salvadoran-Mexican resident of City Terrence, tomorrow's Sunday game represents a unique opportunity for his team and the perfect excuse to share with the family.

"We are living in the clouds for this Super Bowl, we hope this year may be the season for us … We will invite the family to watch the game and hopefully everything goes well."

Jiménez dared to give a forecast and said he hopes the final ends 21-14 in favor of the 49ers and if that happens, perhaps it would be the perfect time to tattoo the team of his loves, as his brothers already did.

“If on Sunday they win, maybe they would tattoo me. I think that for my love for them it would be worth it because I don't plan to change teams, ”he says.

A hobby that takes it all over the US

Like Jiménez, Alejandro Rosales, he is the forerunner of this passion in his family and has taken it to another level by creating a travel group to see the 49ers across the country.

"My family saw how I loved football and now everyone is a fan too, we are eight brothers and we are all 49ers."

For seven years this Mexican-American businessman has traveled to different cities of the country on his birthday – November 22 – to see the team from the bay.

The choice is made depending on the encounter that is closer to your birth date and of course, that it is in a stadium that you have not visited before.

“Every year I go to see the 49rs at a different stadium, I already have seven years doing that… I have gone to Dallas, Chicago, Green Bay, Arizona, New Orleans and others and every year we go to more friends. This time [this season] we were 22 people, ”he says excitedly, remembering that the first year was just him, his sister and three friends.

“Next year we will go to New England to see them against the Patriots, almost all of us are from Southern California, we have a family of four that comes from Houston, Texas; and another family we met when we went to Washington and now they are also with us, ”he says.

Rosales plans the trip since April when the game calendar is announced so that all travelers can buy their plane ticket and book their hotel in time.

“Then I get in touch with the team we are going to visit and buy the tickets in groups of 15 or 30 and we all sit together,” he explains.

That way, this fan takes the opportunity to support his favorite team and to enjoy another of his passions: travel.

“We like to travel a lot, so our fans give us the opportunity to see the 49ers and get to know a new city in the United States. It's like a vacation we take together and it's the part I like most, share with my friends and meet new places. ”

Rosales already has everything ready for the party he plans to live on Sunday, from which he hopes the "Niners" will be victorious.

"Hopefully they win because we have a lot of time that we don't win a Super Bowl," he wishes.

Whatever happens, he says he already has everything ready to enjoy the long-awaited Super Bowl without distractions.

“Every year we have a party for the Super Bowl and we have up to 30 people, but this time we are going to be like 50 people and we already have some people who are going to make us all the food and drink so that we are only aware of the game and we let's relax a little more, ”says the resident of the city of San Pedro.

Isabelle Adjani and Peter Brook on the Crossing the Line 2019...

In Miami, the Fête de la Musique will be virtual and...