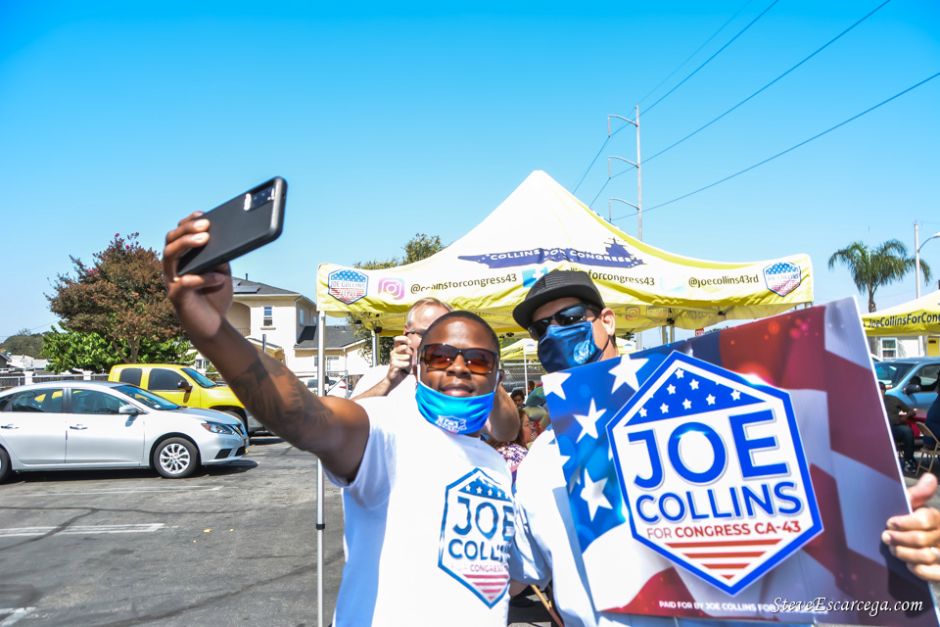 Joe Collins, a native of South Central Los Angeles and a proud US war veteran, is determined to represent California’s 43rd District which covers areas such as South Los Angeles, Torrance, Lomita and Harbor City among others.

Collins, 34, grew up near 104th Street and Normandie Avenue where he experienced firsthand the low quality of school education, high gang rates and crime.

The millennial Republican said in an interview with La Opinion that he was on the verge of getting involved in gangs but his mother, who was a single mother, saved him and moved the family to Texas when he was 14 years old.

After graduating from Collins High School, he enlisted in the US Navy where he served from 2004 to 2017. The leadership learning he gained in the military motivated him to return to his roots and want to make a positive change in his community.

The candidate said he seeks the election to the 43rd district, with the Republican party, because he feels that since he left to date almost nothing has changed in his neighborhood and positive changes are needed.

“It’s time to rebuild our community, it’s time to improve our education, and it’s time to bring back quality jobs and opportunities for everyone in that district,” Collins said.

Collins said that if elected to the position, he has his five-point plan ready to revitalize the district he wants to represent. This plan includes focusing on economic development, district rebuilding, financial literacy, school education, and ending homelessness.

The candidate stated that he is willing to improve the relationship between the forces of order and the community. For him this is very important as it will allow small businesses to prosper.

As for the point of education, the candidate plans to rebuild secondary schools.

“We are going to have new and improved high schools with an emphasis on college prep STEM (science, technology, engineering and math) for training and certifications,” Collins said. “And with an emphasis also on art in sports, to give our students the best opportunities to be successful.”

The candidate also wants to focus on bringing financial education to the community so that residents, primarily African Americans and Latinos, learn to manage their finances.

“I want to bring quality jobs to our community so that people can have money left over at the end of the month to take their family on vacation if they want,” Collins added.

Your view on immigration

Collins said he does not support illegal immigration, but legal immigration is good for the United States as it allows “a lot of smart people” to move from other countries to make this nation more diverse.

“What I would like to see is the DACA program have a path to citizenship,” Collins said. “And I think that’s the most important piece that we’re missing, I mean, we need more judges, we need more immigration attorneys. So we have to close that gap. “

As for people who have lived for decades without legal immigration status, Collins said that if they can show that they are a positive and productive part of society, then they deserve to be here like anyone else.

“We have had a terrible judicial system when it comes to immigration, people are still waiting for green cards, others are waiting for work visas or citizenship and all these things must be processed now,” said the candidate. “And everyone who lives here, everyone who wants to be a part of America must have the ability and the opportunity to help us move forward.”

Collins said that when people find out he is a Republican, they are initially amazed but once they hear his roadmap it catches their attention.

“Although I am a conservative Republican, people appreciate that I am from South Central Los Angeles,” said the candidate. “They also understand that the current representation has done nothing for our community, so it’s time to change, it’s time to balance our state.”

Collins expressed that the most interesting thing for him is seeing that he and the residents of District 43 share the same ideas, ideologies and similar life experiences.

The young man, who as a millennial also understands the frustration of his own generation, recognizes that many millennials are reluctant to participate in politics because they think their voice is not heard.

“I encourage more millennials to do like me, take a stand and seek a political position. It doesn’t matter if you’re a Democrat or Republican, Independent or whatever, ”Collins said. “Our change for the future depends on us, actively engaging in politics to be the change we want to see.”

Collins explained that although he is 100% unaware of how the COVID-19 infection works, he does believe that the pandemic is real. However, he also believes that the media have bragged to make it appear more deadly than it actually is.

“But at the end of the day I think one thing that we have walked away from as Americans is taking care of ourselves, and that means exercising, good hygiene.”

The candidate added that “from time to time” he uses the mask at his public events depending on the comfort of the people with whom he is involved.

“I understand that the Constitution gives people the freedom to live their life without the obstacles of the government,” he points out. “Some people are comfortable wearing a mask and of course if people don’t want to wear a mask, fine, but if people wear masks, then I wear mine because I want to respect them.”

French cinema in the spotlight at the Fort Lauderdale film festival

40 years in prison for former LAPD agent for murder of...