Home Latest News Trump's fear and Bernie's hope and inspiration take the Angels to the... 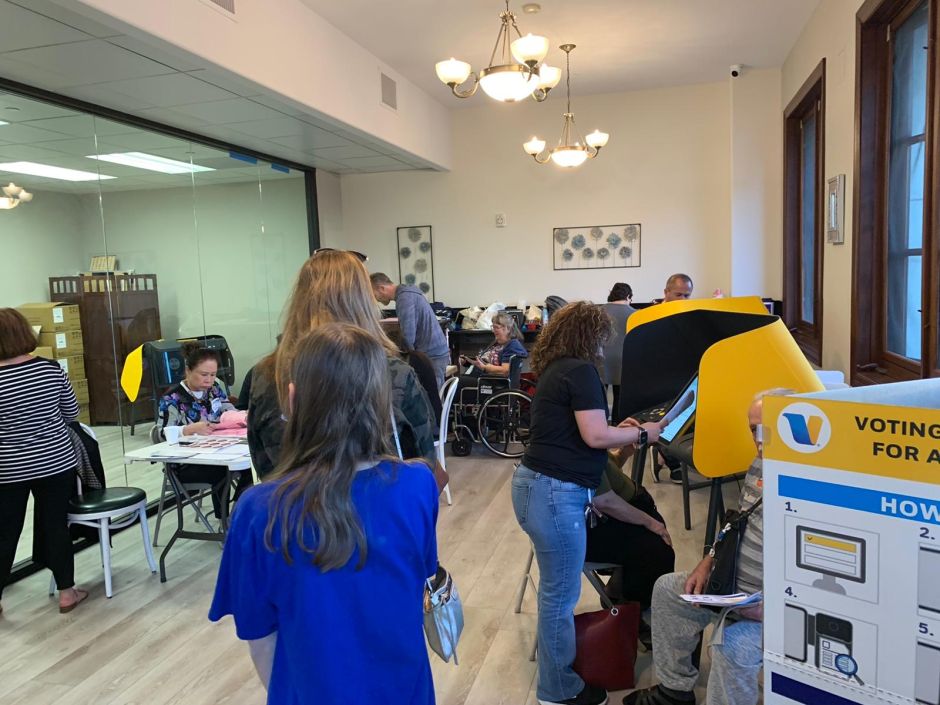 In the massive electoral participation there were many immigrants who voted for the first time.

Two months after becoming an American, Angie Valencia went to the polls full of emotion to vote for the first time in a US primary election.

“It was a very special moment that I waited for a long time and decided to go to the polling station because I wanted to live the full experience,” says Angie who emigrated from El Salvador when she was seven years old.

“As a woman, as an immigrant and as a professional, I breathed fully every minute it took me to vote,” she says enthusiastically.

The process to deposit his vote in a voting center in the city of Winnetka in the San Fernando Valley was very smooth and easy, far from any complication, he says.

What moved him the most in his first election was to participate in the election of the Democratic nominee for the presidency.

"From the day I became a citizen on December 19, 2019, I registered as a nonpartisan voter, so I asked for a ballot crossover to vote for a Democratic candidate”, He says happily. “I will never forget this day for which I wait 30 years, and because when I voted I made my voice heard. Voting has been very inspiring and has made me feel empowered. ”

In these elections, immigrants like Angie are expected to play an important role in the primaries. According to the PEW Research Institute, the number of newly naturalized immigrants who are eligible to vote increased 93%, from 12 million in 2000 to 23.2 million in 2020.

Rebeca Sotelo, is a Mexican based in Los Angeles who last year became a citizen, and just last week she voted for the first time in a US primary election.

"I want to make a difference with my vote and be told to elect the Democratic candidate. ”, He says.

“I felt very excited, but at the same time with uncertainty because I felt that I needed information on proposition 13. I feel that the data that you put in the electoral brochure is very few,” he says.

And he adds that it was hard for him to understand the blank space to write the name of another candidate.

Rebeca, who registered as a Democrat, says that because it was her first time, she preferred to vote by mail to have more time to analyze and think about her answers.

This year, Latinos are expected to be the largest ethnic minority in the presidential election for the first time. According to the PEW Research Center, Latinos make up 13.3% of the country's eligible voters with 32 million voters compared to 30 million African Americans (12.5%) and eligible voters of Asian origin (4.7%). In California, there are 7.9 million eligible Latino voters, representing 30% of all Latino voters in the US.

Paloma Nafarrate, a follower of Bernie Sanders and who volunteered for her campaign four years ago, registered as a Democrat, says that it was precisely her candidacy that inspired her to participate.

"I am very encouraged to have a candidate who has a detailed plan to help the environment, which supports Medicare for all, who listens to people and does not take money from companies that pollute the environment, and that his candidacy is a movement of the bases”, He says.

She decided to vote last week at a voting center in Glendale, where she lives.

Francisco Moreno is a Mexican immigrant who has been voting for 15 years, practically since he became American.

“This time I moved to vote with more desire that we have an anti-immigrant president and because the country is moving towards fascism. We need a lot of changes, and the first thing is to change President Trump for a president who listens to the people and belongs to the people. ”

Moreno is registered as an independent, asked for a ballot crossover which allows him to vote as if he were a Democrat even when he is not affiliated with that party, by one of his presidential candidates.

Saúl Ríos, is a 29-year-old boy, born in the United States of Mexican immigrant parents, registered as a Republican.

“I have been voting for ten years, and this time what has inspired me to come out are the local issues, the elections for councilors, supervisors and prosecutor of Los Angeles County”Says Saul who went in person to vote.

Imelda Beltrán has voted in primary elections since the time of Obama. “I am registered Democrat. Definitely what excited me most about participating this time is what is happening with President Trump. My vote is an opportunity to make a difference and that the current president does not win again, ”he says.

Imelda became so involved that she decided very early to go knocking on doors in Meywood to ask for the vote in favor of Bernie. “What gave me the most joy was that many people had already gone out to vote,” says this naturalized Mexican American immigrant who was a Democratic delegate for Bernie four years ago.

Republican political consultant Luis Alvarado already voted late at Pico Rivera. “What encouraged me in this election is to realize that the Latino community continues to grow in number and power. Candidates at the local and national level can no longer ignore the Latin voice, and they have to build a message that is truly imaginative and impactful for what we occupy in the future, ”he says.

When asked if he would vote for Trump, he replied that he would leave the space blank and not give him his vote.

“Despite being a Republican, I have never been his ally, let alone since he began attacking my community. It was at that moment that I got up in opposition, ”says Luis born in this country, but the son of Mexican immigrants. "Since I turned 18, I voted in every election," he says.

He went to vote accompanied by his wife Lupita Muñoz Alvarado, who is registered as a Democrat, and whom he met in the campaign for governor of Tom Bradley, Democrat.

The U Visa, the best gift for a victim of attempted...

Body of Hispanic man found in construction near SoFi stadium in...

Why is it so difficult to tell the LGBTQ community in...

Can we go through Mexico to return to the United States?