Home Latest News Trump was trying to put more obstacles to legal migration, but a... 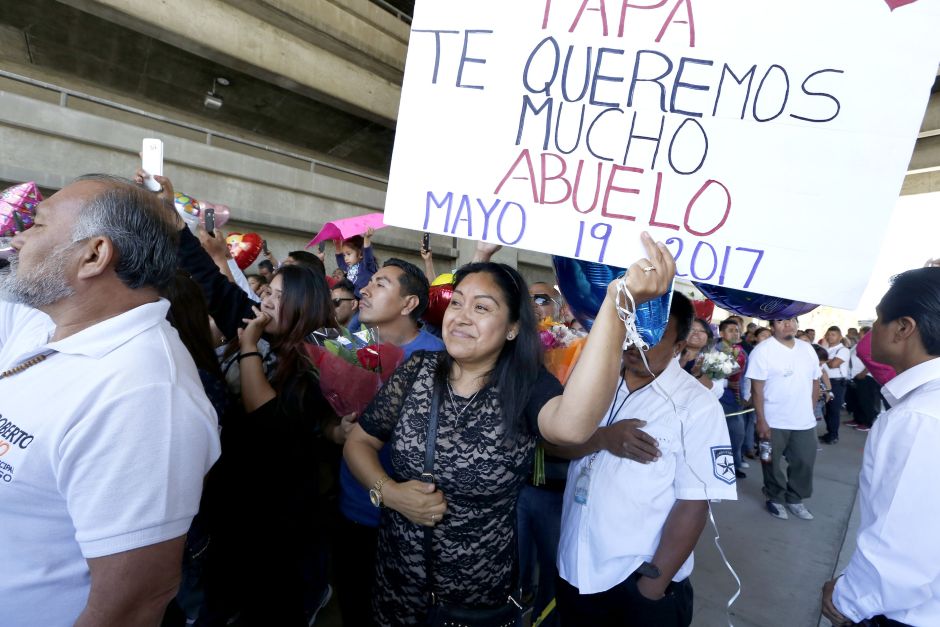 Although the president’s move has been postponed by an indefinitely court, immigrants fear they will refuse a tourist visa to their elderly family members.

Miguel looks forward to the day when he can finally hug his mother again, whom he stopped seeing almost two decades ago. The 63-year-old lady has an appointment in Mexico to apply for her visa to enter the United States on December 18.

However, both are worried about whether the visa will be approved after President Donald Trump's announcement about prohibiting applicants from obtaining a visa if they do not show proof of valid health insurance or the means to pay for their medical services in the United States.

"I saw in the news that they already blocked (the measure), but we are a little nervous," said Miguel, 33, who preferred to omit his last name for security reasons.

The president's proclamation was announced in early October and was scheduled to take effect on November 3 but was temporarily blocked by a Federal Court in Portland, Oregon a day earlier.

The Temporary Restraining Order (TRO) would expire at the end of the month but this Tuesday, November 26, federal judge Michael Simon extended the blockade indefinitely while the litigation continues.

This means that people can continue to process their visas without verification of medical insurance as requested by the president through his proclamation.

"The United States Government is making the problem worse by admitting thousands of foreigners who have not demonstrated any capacity to pay their health care costs," the president said in his proclamation.

For their part, lawyers fighting the ban say that, "the new requirement rewrites our immigration and medical care laws" and will affect the entry of up to 375,000 people each year.

The political analyst Hernán Molina said that this proclamation of the president is part of his policy and is consistent with everything he has undertaken; Its objective is to reduce not only illegal immigration but also legal immigration.

"This is another chapter in Trump's saga against immigration, even if it is legal immigration," said Molina.

"Because they see the immigrant as a person who occupies, invades and comes to get Americans out of jobs."

Trump added that immigrants entering the country should not give the health system or US taxpayers more burdens.

"Data shows that legal immigrants are three times more likely than US citizens to lack health insurance," the president said in his proclamation.

The president was referring to a study that revealed that, among the non-elderly population, 23% of immigrants legally present and more than four out of ten (45%) undocumented immigrants have no insurance compared to less than one in ten (8%) citizens.

The Kaiser Family Foundation study also revealed that U.S. citizen children with at least one non-citizen parent are almost twice as likely to have no medical insurance compared to children where both parents are U.S. citizens or 7% compared to 4 %.

Fulfilling with the rules

Miguel assured that his mother is in good health but that, if necessary, he and his brothers would pay for any medical expenses that may be required during their stay. On the other hand, the family will be disconsolate if their mother cannot obtain a visa.

“My older brother is 22 years old without seeing her. One of my brothers has two children and the other has three and my mother does not know any of her grandchildren, ”he said.

Miguel, a native of Sinaloa, (Mexico) and the youngest of five children, emigrated to the United States at 17 years of age in order to work and help his parents in Mexico. In Los Angeles he settled with his older brothers who had arrived before him. However, his undocumented status prevented him from returning to his country. He could not arrive even when his father died five years ago.

For him and his brothers, the only option is that his mother can come here to visit them.

The fear of being able to lose the visa because of medical services in the United States also invaded Mr. Leonel, 48. He has an 80-year-old uncle who has a visa and comes to visit the family once or twice a year from Mexico.

However, on his last visit — a little over a month ago — the uncle became seriously ill to the point that he had to be hospitalized.

“The pressure went up a lot and we took him to the general hospital (Los Angeles County + USC),” said Leonel, who also did not want to provide his last name for security reasons.

Leonel is a native of the state of Michoacán and emigrated to the United States 20 years ago. Here he married, has three children and resides with his family in Huntington Park, southeast of Los Angeles. However, his status has not allowed him to return to his homeland.

Leonel said he had just heard an announcement from President Trump where he planned to ban visa approval from anyone who had no proof of how to pay for his medical services in the United States.

Leonel said his uncle was hospitalized for approximately seven hours — from 8 at night to 3 in the morning — and the charge came to them for about $ 1,800.

"We pay (the charge of) hospitalization for fear that next time they will not let him in if he appears in his record," Leonel said.

Measure locked, but not canceled

Although Trump's proclamation addressed to foreign visitors was blocked by a federal judge, now indefinitely, it has not been overturned, experts said.

The temporary restraining order was established to last 28 days, which means it would have expired on November 30, said Ramón Valdez, director of strategic initiatives with Innovation Law Lab, which is part of the coalition that filed the lawsuit.

Valdez had explained that the purpose of the Temporary Restraining Order was to prevent plaintiffs in this case, and the thousands of people who would be affected by a medical care ban from suffering irreparable damage.

The national complaint had been filed by seven American citizen litigators and the Latino Network nonprofit organization against President Trump, as well as the departments of State, National Security, Health and Human Services, and related cabinet secretaries.

The complaint accuses the State Department of having issued an "Emergency Notice" with a comment period of less than 48 hours.

The notice stated that the proclamation would allow consular officials to "verbally ask immigrant visa applicants covered by (the Proclamation) if they will be covered by health insurance in the US within 30 days of entering the country."

If the applicant says yes, "consular officials will ask applicants to identify the specific health insurance plan, the date on which coverage will begin and any other information related to the insurance plan that the consular officer deems necessary."

If the applicant does not have health insurance, but has financial resources to pay their medical expenses, the visa will not be denied, according to the emergency notice.

But due to the judge's decision yesterday, this whole process will be stopped until further notice. However, getting a tourist visa is not easy and that makes applicants and their families in the US nervous.

Miguel is very hopeful that on this occasion they will approve his mother's tourist visa, since in the past they have been denied several times.

"The last time was like four years ago and although he kept an account of the bank and all his documents, he was only told no and to return in a year," Miguel said.

"And the most stressful thing is to know that the date of your appointment is in a very delicate time because it is before the holidays (end of the year) and the agents can say, yes or no, and it is a final decision," said Miguel.

Miguel's mother is part of a group of 40 seniors who have an appointment at the US embassy in the city of Hermosillo, Sonora on December 18 to apply for their visas.

Family reunification is being led by the Sinaloense Fraternity group, one of several immigrant groups abroad that are dedicated to reuniting elderly parents with their children who live — usually undocumentedly — in the United States.

If they approve tourist visas, the elderly group will arrive for the first week of January 2020 and will be here for a period of one month before returning as a group to Mexico, said Imelda Beltrán, spokesman for Sinaloense Fraternity.

"(If visas are approved) There are children who will come to see their parents from Arizona and New Mexico," Beltrán said. "Everyone is very excited and very hopeful."

East draft is result of a innovative entrepreneurship journalistic –The USC Center for Health Journalism Collaborative– what It includes a variety from media informative from everything he state Of California dedicated to present reports sets on people without safe doctor what reside at state. Between the media informative he include the newspapers from Gannett Co., McClatchy Corp., The Opinion and Southern California News Group, A) Yes as as well the stations Capital Public Radio and Univision.

‘We don't want any more detainees’ | The opinion

New procedure to board buses in Los Angeles for the coronavirus