Home Latest News The U Visa, the best gift for a victim of attempted homicide 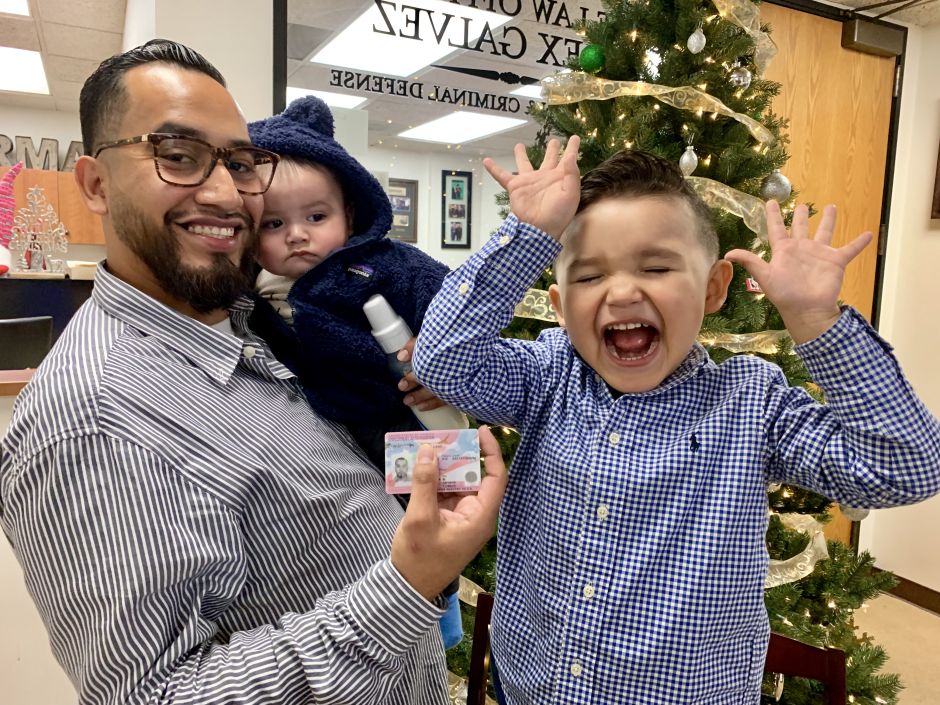 Luis Alberto Gómez Cano received an unexpected Christmas gift, the U Visa that ended three decades of his life as an undocumented, and opens the way for him to obtain residence and become a citizen of the United States.

“I am very proud and happy. This is a dream come true. Now I feel that there are no limits in my life. I could not have received a better Christmas gift, ”he exclaims full of happiness.

He was born 33 years ago in Mexico City, but his parents brought him to Los Angeles when he was three years old. He grew up in Boyle Heights. He is married to his teenage girlfriend, the elementary school teacher, Evelyn Gomez, and is the father of two three-year-old Tiago and six-month-old Teo.

The U Visa helps undocumented people who are victims of serious crimes to obtain a legal stay in the country and protects them from deportation. He grants them a work permit, and three years later, he helps them obtain residency.

But to get the U Visa, Luis Alberto had to pay a very high cost. In 2014 he was the victim of a crime that almost cost him his life.

“I worked as a manager of a car wash business in Beverly Hills,” he recalls.

It was the night of August 24, 2014 when the tragedy practically knocked on the door of his house.

“It was about 11 pm, I was returning on my bike to my house between Whittier and Lorraine streets in Boyle Heights. I was opening the cancel when I felt someone approaching me. I turned and greeted in English. Good night, I said. He answered me, good night, ”he recalls.

It was a white man. Although the neighborhood was very dark, Luis Alberto says he could see that he was a homeless man who was under the influence of drugs.

“While trying to open the cancel door, I felt it closer. My instinct was to flip. It was when the man asked me for money. I told him I didn't bring. Then he wanted to pull the bike, ”he talks.

At that moment, he says that he pushed the bicycle inwards to prevent it from being removed. “I managed to put it in and put it under shelter, but in that I felt a stab in the belly. I pushed him and the man fell, ”he says.

“He attacked me with a long kitchen knife of those that have steel teeth, and that look like saws. They are bought in the store of 99 cents “Precise.

The young father narrates that everything went very fast. When his attacker was still on the floor, and Luis Alberto feared he was going to attack him again, his wife opened the door of the house, and shouted, what is happening.

The man, he says, got up, took the knife and ran.

"I was in shockparalyzed I felt weak. I was bleeding a little. My wife helped me putting on gauze pads to stop the bleeding. We went to the house. The bleeding stopped. I told him that I already felt good, that it was nothing. There was no need to go to the doctor. Let me relax, ”he asked.

Luis Alberto narrates that they went to bed, and fell asleep for about an hour. “When I woke up, I felt very bad, with a lot of fever. I was no longer bleeding, but I had a ball made at the site of the wound, ”he says.

He urged his wife to take him to a hospital. ”We went to emergencies. They attended me immediately. The ball that was actually a blood clot had gotten bigger. They had to operate me. The stab had affected my large intestine, ”he says.

Although he was in the hospital for a week and a half, it took him more than a year to recover.

“For a long time I was full of probes. They cut a piece of my intestine. I could not go to the bathroom. I had to learn again, ”he says.

When he could stand up he had to lean on a cane.

It was his mother Sara Cano who works in the cleaning of the building where the immigration lawyer Alex Gálvez has his offices who approached the defender, and told him about the crime committed against his son.

“He told my mom that there was a chance that I could fix my immigration status. I went to see him at the end of 2014. It was still very bad. The lawyer told me about the U Visa, and gave me hope, ”he says.

Luis Alberto cooperated with the police to investigate the crime he was subjected to. “They gave me police certification after fighting a lot. Although they could never stop the person who assaulted me, Today I feel very well physically, but the emotional trauma continues. I don't feel safe anymore, ” He says.

It took him five years to obtain the U Visa. On December 20, lawyer Gálvez called him at his office to give him the good news.

“I feel that I have removed a sack of stones from above. My goals are no longer so unattainable. Since childhood I have always wanted to be a car mechanic. I went to university for a year, I learned the basics, but not having a social security, driver's license or financial aid, it made things very difficult for me. I tried to enter the Navy and Navy, but they didn't allow me either. Now I can have the opportunity to get a mechanic's degree and my own workshop, ”he talks enthusiastically.

Residence on the way

The immigration lawyer, Alex Gálvez who took the case without charge (non profit) In consideration of Luis Alberto's mother, he says his case was relatively easy because he suffered an attempted murder by being stabbed, and cooperating with the police.

“The U Visa is for serious crimes such as a shot, a stabbed, a kidnapping, sexual harassment, attempted murder; and it is necessary to cooperate with the police in the investigation and clarification of the crime, ”he says.

He says it took five years to get it because U Visas are delivered once a year in October. "10,000 are given per year“, Observe. "It also affects the delay that many people request it because more is known about this relief," he notes.

The difference that has been seen under the Trump era in terms of U visas, is that they used to occur every three to four years. Today it takes five years for high demand and the limit on the number of deliveries each year.

“What we have seen is that work permits were given to a U Visa applicant, one year after the petition if the case was proven to be strong. This is no longer the case, ”he explains.

Luis Alberto's work permit and U visa almost arrived at the same time.

Although he is married to an American citizen, elementary school teacher; and they have two children, he could not get residence only at the request of his wife.

“Since he didn't enter legally, he couldn't do it. With the U Visa, things change. The U Visa gives you a legal entry. Technically you don't have to wait three years to apply for residency based on the U Visa. With the request of his wife and the U Visa, in a period of six to eight months, he can already be a resident“, Says lawyer Gálvez.

French restaurateurs from New York: “We don’t know what tomorrow will...

Dolores Huerta turns 90 and celebrates it by raising funds to...

Hispanic who loses sight will be in exhibition of blind photographers