Home News & Politics The proposals adopted in San Francisco: what will change 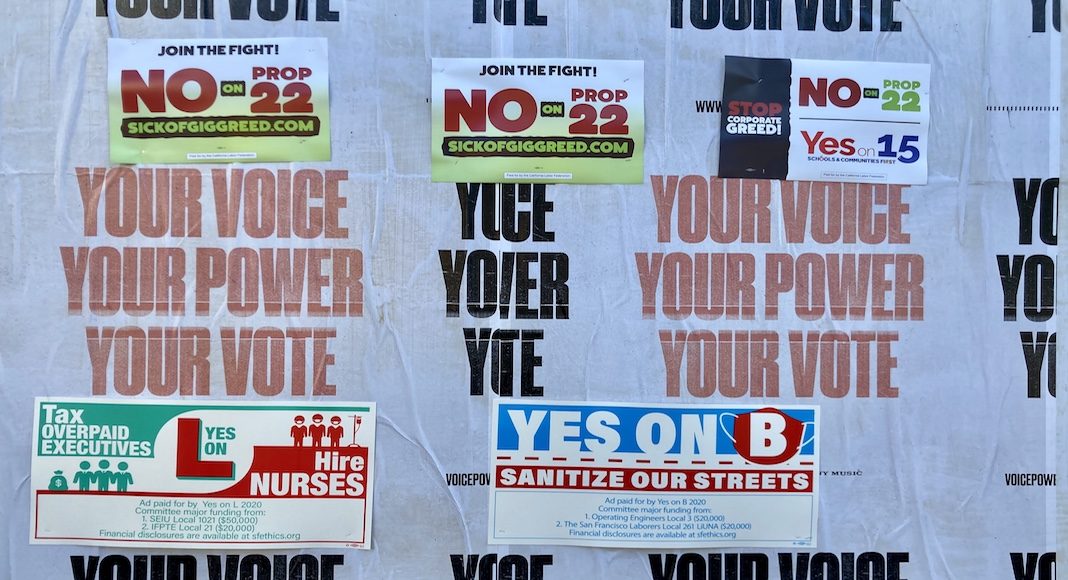 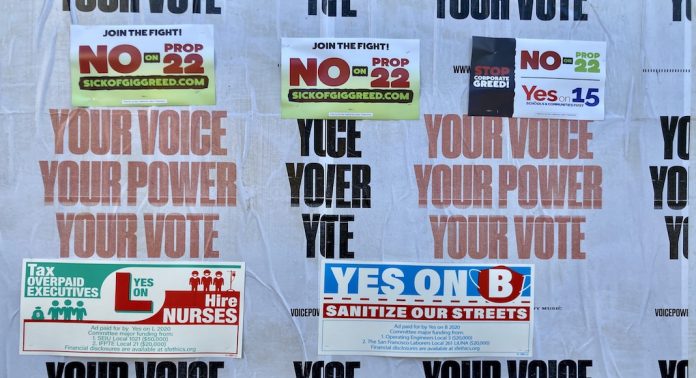 While America was electing its president – or trying to do so – for the next four years … citizens also voted for or against a number of state and local proposals. A Prévert-style inventory of direct and local democracy. Here is what it will change in San Francisco and California.

Californians have chosen 5 measures out of the 11 proposed

Proposition 22 : It is probably the most publicized. It exempts drivers in apps like Uber, Lyft, and DoorDash from state law that classifies some workers in the gig economy as employees.

The platforms concerned spent more than $ 200 million so that the yes wins (58.4% is done). One way to avoid paying more for their workforce if they were employed. Or in any case to save a little time since these companies are on trial. Uber and Lyft with California, DoorDash with San Francisco, Instacart with San Diego.

They do not respect the said state law which would have re-qualified their relationship with the drivers as an employment contract. By comparison, the opposing side spent $ 20 million. With the aim of granting more social rights to these workers. Uber nevertheless announced that its regular independents would have more advantages. ” A guaranteed wage equivalent to 120% of the minimum wage, as well as a contribution to health care, accident insurance etc. “

Proposition 14 : The trend is yes for refinancing the California Institute for Regenerative Medicine. The California Stem Cell Agency is expected to be able to issue $ 5.5 billion in bonds for research, training and infrastructure construction. Except change in the next few hours.

Proposition 17 : 59% yes to restore the right to vote of those on parole who have completed their federal or national prison sentence.

Proposition 19 : It would allow older homeowners to keep a lower property assessment when they move. But inherited homes worth more than $ 1 million will have their taxes reassessed if the late owner’s children or grandchildren do not intend to live there. Again, not everything is decided at the time of publication but the yes precedes the no.

Proposition 24 : 56.1% of voters approved the extension of the data privacy law that California adopted in 2018 (just after the European GDPR – General Data Protection Regulation).

Wave of “yes” in San Francisco

Proposal A : The obligation of 487.5 million dollars for health and the homeless, parks and streets, has been approved. Enough to fund mental health and drug addiction treatment facilities. Or supportive housing and homeless shelters, among others.

Proposal B : The San Franciscans accept the assignment of part of the tasks of cleaning the streets, maintaining the sidewalks and cleaning up public works to a new entity.

Proposition C : No need to have American nationality to sit on boards of directors that advise the town hall. Including on housing or health care.

Proposition E : Voters approved the elimination of the San Francisco law requirement that the police department have at least 1,971 full service officers.

Proposition F : It is a profound change in the tax structure of companies in San Francisco that is coming. More SMEs will be exempt from business tax and the tax rate will increase for other businesses.

Proposition G : Young people aged 16 and 17 could be granted the right to vote in local elections, nothing is yet decided.

Proposition H : Citizens vote yes to change the process for issuing permits for businesses. Another welcome help for those suffering from the pandemic.

Proposition K : More than 10,000 low-rent homes can be renovated or built.

Proposal L: This measure aims to tax companies where senior executives earn significantly more than their workforce. The company will be taxed if the highest-paid person has a salary that is 100 times or more than the median salary of its employees in San Francisco. This tax would bring in between 60 and 140 million dollars per year from 2022.

“We are in the dark”: the Franco-American galas facing the Covid-19