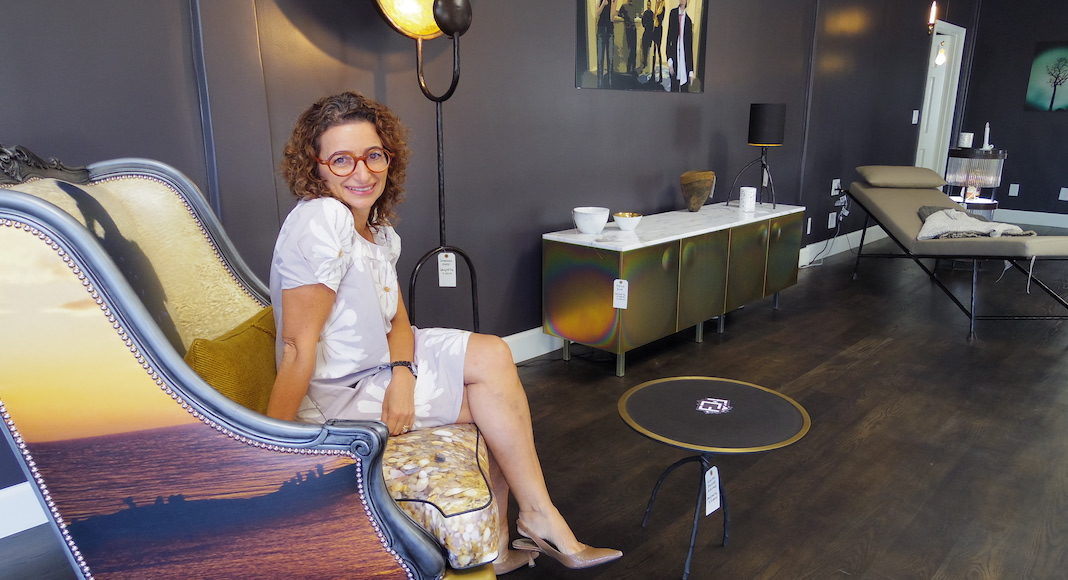 "Bring the French touch to interior design" : This is the concept of The French Apartment Gallery, which opened its doors near Melrose Place on September 13th. A project led by Nadine Teboul, who wandered around the world with her family before setting her bags in Los Angeles.

In this intimate gallery of 100 m2, nestled in the heart of a building of the 40s, there are chairs covered with staggered photographs of Maurice Renoma, a Carrara marble table with dimensions beyond standard, light suspensions Limoges porcelain Sylvie Maréchal or a sculpture based on tree bark Pascal Oudet. Each object has a story, an original creative process that Nadine Teboul gives back to her clients. And she wants to go further by offering tailor-made pieces and consulting services to create a custom-made universe for those interested.

From a personal selection, the contemporary pieces presented – from $ 300 to $ 60,000 – are all produced in France, in small series, by a dozen suppliers and artisans. "They are objects and furniture of exception very little seen in the United States", assures Nadine Teboul, whose eyes are seduced by the pieces that offer "An authenticity, a touch of poetry, impertinence or revisits noble materials". New coins will arrive each quarter in the immaculate lair of the gallery. A time attracted by textiles, she chose not to present in her gallery: "They are taxed at 20%"she explains.

After an expatriation to Japan at age 27 – a country that will give her a taste for nomadic life – she moved to New York, London, Paris, Bordeaux and Tel Aviv. Today, her children having left the family home, Nadine Teboul and her husband wanted to return to American soil and embark on a personal project. Especially since there was a wait in Los Angeles in terms of interior design and rare pieces, because of a flourishing real estate market. "The city is coming out of the cinema industry to open up to other arts", argues this fifties dynamic. Attempted by Downtown, she will choose a safe bet and will finally land in the Interior Design District, a district of West Hollywood where galleries are multiplying.

"In France, design and furniture are on the margins of art; whereas here, the passages from one to the other are done more naturally "says the Parisienne. Not to mention that the Americans' budget lends itself more to this type of gallery: "They have a less sharp look than the Europeans, but are able to spend if the play is unpublished."

From fashion to ecology to interior design

In the fashion industry 20 years ago, Nadine Teboul is quickly exhausted by the frantic pace of collections. She then goes through the studio of Robert the hero in Paris, which creates graphic design modeling of the earth. "This versatility has marked me"says the holder of a master's degree from the French Institute of Fashion and Design in Paris, already influenced by a mother painter and grandparents craftsmen. At the mercy of her moves abroad, she multiplies projects of decoration for friends.

His journey seemed all traced. But when she moved to Bordeaux, she decided to change course and turned to renewable energy. Taking a Master in Human Ecology at 42, she will manage, between 2011 and 2014, with her husband, a photovoltaic project development company. A company left to go to Tel Aviv find its family roots, the last step before Los Angeles.

Even if this artistic world is not new to the Parisienne with the thick glasses scale, it is a big step. "The purchase of parts is an important investment. It's much more difficult than importing macaroons. "

How many questions are on the CE Shop final exam?

Why is Charleston SC so expensive?

What does a home inspector do?

Christmas parade in Hollywood: the largest in the United States

Asylum seeker seeks his son who is in the hands of...