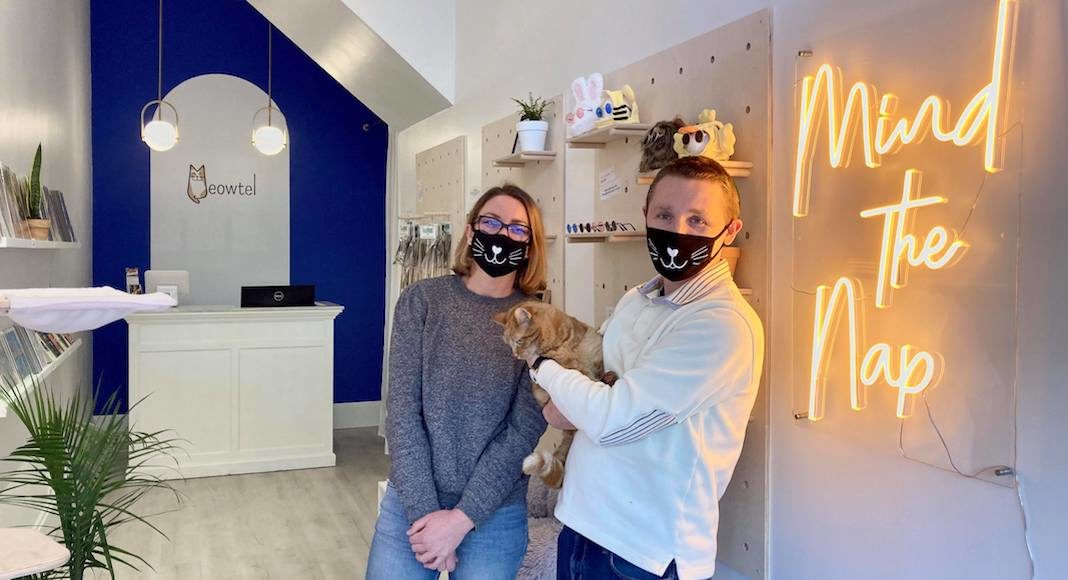 54 million minimum, maybe double. The number of cats in American homes is considerable. A niche that Sonya Petcavich and Bruno Lévêque, co-founders of Meowtel have decided to exploit. ” A mobile app and website that allows cat owners – or cat parents as they say in the United States – to find a reliable cat-sitter near their home », They explain. The two entrepreneurs have just opened a store in Hayes Valley (San Francisco). History to make himself known while sourcing original products for twinks. A promising omnichannel strategy.

Bruno Lévêque joined the adventure at the beginning of 2020. He is now CTO and investor, after having himself been a user of the platform created in 2017. “ My wife had registered as a cat-sitter, she was overwhelmed with requests and I gave her a hand. There were things to improve on the website. So as an entrepreneur I contacted Sonya to mentor and coach her a bit. Having myself had this luck at a younger age, it was a good way to pass the torch », He says.

The co-founder and former CEO of PrestaShop (an e-commerce software that facilitates the creation of online stores) had just had a stroke. ” No after-effects but it really shook me », He confides. ” I decided to get out of operations, to remain a shareholder and to do something else. »Having two cats himself, Plop and Ploppy, he takes a closer interest in the cat-sitting business and lands on his feet with Meowtel.

The added value of Meowtel lies in the verification of cat-sitters. The people selected are reliable and very attentive to the well-being of the cats. “ Everything is very framed, that’s what pleases », Reveals the entrepreneur. The process includes 5 steps: CV check, reference check, background check, questionnaire and video interview. Everything is done to put the parent cat – the term is particularly appropriate in the context of this premium home service. The cats stay in their environment so as not to disturb them, it is the cat-sitters who come to them. The company retains less than 10% of candidates, which it then assures. Cat-sitters are thus protected in the event of injury during a visit. And the cat parents in case of damage or health problem of the cat induced by the guard.

The cat-sitter can organize a free meeting to get to know the little furballs (or big cats). He will follow the owners’ instructions to the letter. He will give news, photos included, via the application’s chat (messaging not the animal). Payment will then be made on Meowtel. The guards last 20, 40 minutes or all night and the price is determined by the cat-sitters who are freelance. ” On average it’s $ 25, which includes travel, time spent with the cat, insurance etc. but in cities like New York or San Francisco, it can go up to $ 40 », Details Bruno Lévêque.

The company aims to expand throughout the United States and already has 300 active cat-sitters, mainly in the 10 largest cities in the country. ” In reality we have more, but as soon as they become less reactive or whatever, we suspend them. We really only want committed people. The average waiting time when you request a cat-sitting is less than 10 minutes », Announces the CTO. The goal is to quickly reach 1000 cat-sitters to cope with the crowds during the holidays.

Meowtel is a small technology company, growing strongly despite the context of Covid. ” Our clients traveled a lot, especially for work, so in March it was really tough. Then it resumed. Reservations have slowed down but the growth compensates and allows us to do better than last year. Against all odds. “ A record of requests was even recorded for Thanksgiving. After raising $ 785,000 from angels and two seed funds, Meowtel is ready to conquer the cat-sitting market. By offering a specialized service, centered on the feline type, Meowtel develops an expertise appreciated by cat parents. This wag for cats also provides a lot of advice and information on its blog, run by cat-sitters.

For next year, Bruno Lévêque has set himself some goals. ” Strengthen our mobile presence, recruit more sitters and expand, we would like to be more present in more small towns », He specifies. ” At the moment we have active campaigns on Facebook, we constantly look on Craigslist etc., while waiting for a network effect. A tactic that could well pay off. While helping cat lovers who want to put butter in spinach, in times of Covid. ” In some cities, we see that as soon as the federal government stops its aid, we have more sitters because people are looking for odd jobs. That’s what happened in LA where we have about sixty people available. In the Bay Area, there are about ten so far. Lefty, the mascot cat of the 327 Hayes Street brand, could well create vocations among passers-by.

At 121 degrees, Woodland Hills hits the record for heat in...

They investigate death of Hispanic who was beaten at music festival...