Home Latest News Organizations, restaurants and the government join forces to help those most affected... 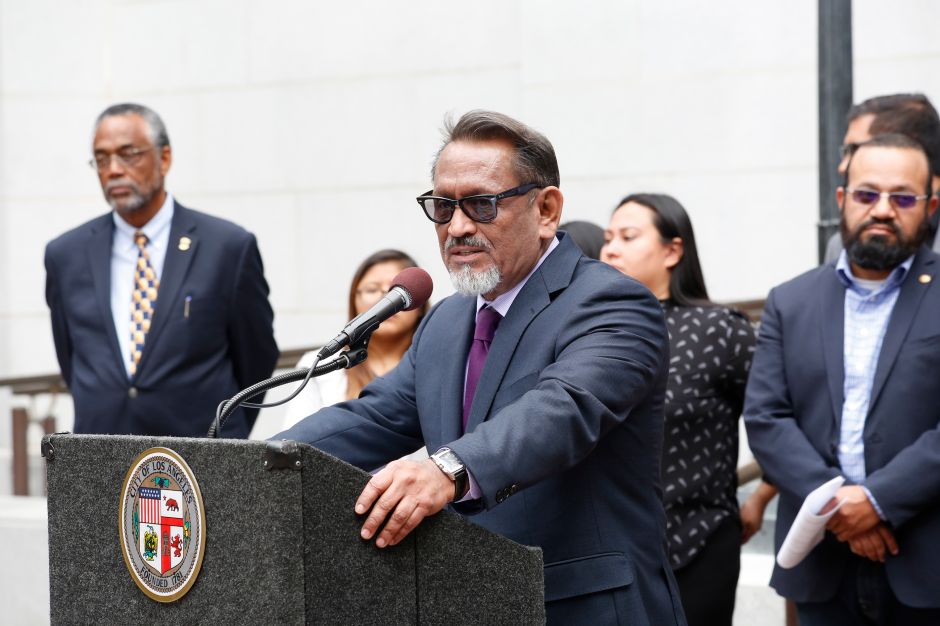 It is estimated that more than 30,000 foods will be delivered in the different neighborhoods that make up District One of Los Angeles.

With the order to remain at home thousands of people throughout the nation continue to be economically affected. In the city of Los Angeles, the order is expected to remain until at least May 15.

To alleviate the anguish of many families, especially those from low-income communities, entities and local leaders are working on solutions.

In District One, Councilman Gil Cedillo of Los Angeles, community organizations, and restaurants teamed up to offer free meals to needy families.

The councilman said that through a discretionary budget, he has awarded grants to 17 nonprofits to buy hot meals from 25 local restaurants and share them with the neediest families.

Cedillo said that he and his team seek to help their community in any way they can; He wants to see that both small businesses and families suffer as little as possible during the pandemic.

"And it is not just any food, we are talking about a hot meal for the community," said Cedillo.

Among the participants is the Lincoln Heights Maracas Café & Catering restaurant. Its owner Miguel Contreras said that he knows firsthand what it is to help in times of need and is grateful to the councilor for having chosen them.

"We gave them a 50% discount so we can serve food to the Boys & Girls Club on Pasadena Avenue," said Contreras.

The owner of the restaurant with more than half a century of existence said that participating in this circle of charity for many people in District One is something that not only benefits those most in need, but also its employees.

Since the Los Angeles Unified School District (LAUSD) temporarily closed its doors, Maracas Café & Catering has been affected since a large part of its income was catering to LAUSD.

"I had to rest 50% of my employees and now I have those I have for different positions," said Contreras. "Even my most loyal customers get free food delivery."

Cedillo, who said Maracas is one of his favorite restaurants, added that seeing the small businesses in his district continue to float is what motivates him to offer support.

"I have the perspective of serving in leadership and I have a long-term relationship with my people," said Cedillo. "My team, which is a great team, looked for ways to work with small businesses without spending money outside (of the district)."

Guadalupe García, organizer of the Institute of Popular Education of Southern California (IDEPSCA), said that the current situation facing many people is the one that day laborers constantly live.

"This situation is only making the need more visible," said Garcia, thanking him for being one of the organizations chosen to offer food to this vulnerable population.

The organizer added that IDEPSCA has made its association with the Antigua Bread and Tierra Caliente restaurants, which are also part of the food program, where they will serve food twice a week for the first three weeks. Food will be taken to the Cypress Park Day Laborer Center.

"There will be 200 meals each time alternating restaurants," said Garcia. "Then once a week, alternating as well."

García expressed that it is very good that the councilor allows the needy community to work in this area.

"Many of them have no permanent job and unfortunately they are not making money now," said Garcia. "Others face chronic diseases that make them more at risk from the coronavirus."

It is estimated that more than 30,000 foods will be delivered in the different neighborhoods that make up District One, at least for a period of four to six weeks.

Food will be awarded to those who arrive first. Only at day laborer centers such as IDEPSCA in Cypress Park and CARECEN-LA in the Westlake area will day laborers be given priority.

If you or someone you know is interested in participating in the food donation, you can send an email to Gilbert.cedillo@lacity.org

Return to France: finally quarantine will be voluntary

Increased number of victims of run-over and fatal accidents in Los...