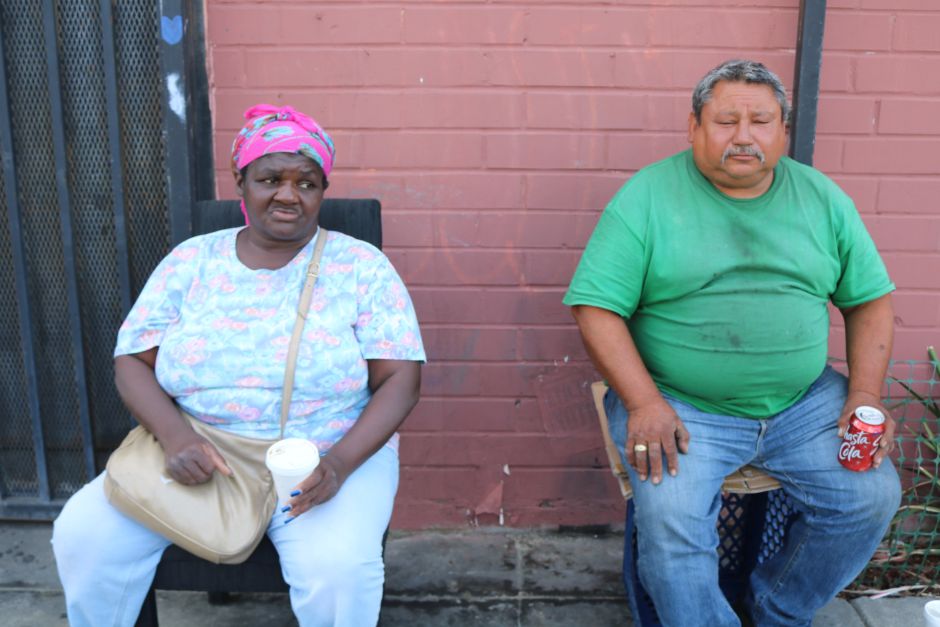 TO Oscar Gonzalez, 53 year old Mexican American and Margarita Lispier, 56-year-old Cuban-American unites them with poverty, destitution, a past of drug and alcohol addiction.

To get out of the streets, the two said they only need one thing: decent employment.

“Since the recession of 2008 I have lost my job; they never wanted to give me a job again, ”said Oscar, while pushing a supermarket cart, between Omar and Tercera streets. "Then I started drinking a lot and did drugs, but now I'm clean."

In the cart, Oscar loads his “treasure”: many plastic bags full of containers of the same material he plans to recycle. He also wears his blankets and little clothes for personal use.

Not far from there, between the 4th and Cracker streets was Margarita drinking her coffee, sitting in a battered chair and looking around, as the sun finished rising.

She says that before she had a safe roof in Los Angeles, where she lived most of her life, since she arrived in the United States in 1967.

“It was Section 8, but every year I was increasing my income and four years ago I could no longer pay the $ 800 per month they charged me,” says Margarita. "I lived alone, after my four daughters grew up and made their lives."

Margarita confesses that she has mental problems. He suffers from depression and is controlled with medications daily. In the same way, he says he goes to a county medical clinic to receive an injection that helps him not feel the sensation of wanting to drink alcohol again.

Óscar and Margarita wander day and night in the streets of Skid Row, epicenter of the most serious housing and humanitarian crisis affecting a total of 58,936 homeless people in Los Angeles County. While in the city of Los Angeles, the 2019 count was 36,165 homeless, according to the Los Angeles Homeless Services Authority (LAHSA).

In the LAHSA report that was released in the month of May, it was also concluded that 53% of people who experienced indigence for the first time, were due to economic problems.

Behind the numbers are human beings and experiences that are also told in Spanish, since, in recent years, this group has been gaining relevance and presence within that world of poverty.

The second largest group and that for many years was number one on the list of homeless people were African Americans who have now lagged behind with 18,719 homeless people.

With mental illnesses and drugs

Among the 58,936 individuals without a given home, 14,906 people are chronically destitute; 12,869 suffer from serious mental illness and 7,264 individuals suffer from substance or drug abuse.

One of them is Cruz “N”, a homeless Latino who was located in front of a car wash center on Seventh Street, next to Highway 5, in East Los Angeles.

“I can't tell you anything; My lawyer told me not to talk to anyone, ”says Cruz. "My lawyer forbade me to speak to the press, because a man named Judas Iscariot betrayed me." Physically, the man seemed fine. But, in the brief conversation it was evident that his mental health was impaired.

A first place nothing honorable

A recent report by the United States Inter-Agency Council on homelessness (USICH) shows that, as of January 2018, California had an estimated 129,972 homeless people on any given day, as reported by Continuing Care authorities. United States Department of Housing and Urban Development (HUD).

As a palliative for the growing crisis of the homeless, Governor Gavin Newsom promulgated this month an AB 1197 measure by Assemblyman Miguel Santiago, which would accelerate the construction of homes for families and the homeless in Los Angeles.

“Supportive homes and shelters are not being built fast enough and while Californians are struggling to survive on our streets, we have a moral responsibility to do everything in our power to provide the shelter and assistance they need to let them rise again, ”said Santiago (D-Los Angeles).

State Senate Majority Leader Bob Hertzberg (D-Van Nuys), co-author of the law said that AB 1197 offers a solution to homelessness shortages by extending the exemptions from the Environmental Quality Act of California (CEQA) for emergency shelters and supportive housing projects in Los Angeles.

“It was an emergency bill because the crisis of the homeless is urgent. Both houses of the Legislature overwhelmingly adopted these changes to break down barriers and put people in a shelter …, ”said Hertzberg.

Law AB 1197 will be exempt from CEQA, until January 1, 2025 in relation to housing financing actions carried out by the City of Los Angeles as a result of Proposition HHH, Measure H, No Place Like Home, SB 2 (Tony Atkins), the Homeless Emergency Assistance Program and the Homeless Assistance, Prevention and Prevention Program.

Los Angeles Mayor Eric Garcetti said historic investments are being made to address the homeless crisis.

"Homelessness is a humanitarian emergency that demands an urgent response, and this law will help us convert plans into buildings more quickly for the shelter and supportive housing that homeless people need now," Garcetti said.

Free: they will give monthly workshops on the rights of undocumented...

From street vendors to businesswomen

conference at the Lycée Français –