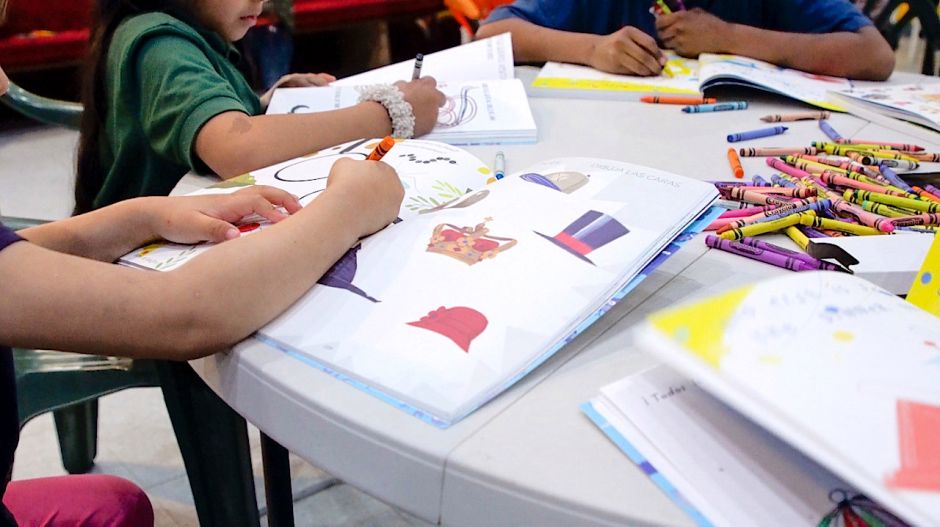 In the midst of the pandemic, little Karina – whose name was changed in order to protect her identity – arrived with her migrant family in Tijuana, Mexico. The minor had a high level of anxiety and stress, both devastating for her age.

She had been sexually abused in her country and that was one of the reasons why the family left everything they knew and fled Central America.

The psychologist Christian Romero gave her a copy of a coloring book with which the girl gradually assumed what the professional defines as an adequate attitude to face.

“At first I only made scratches without much sense, but as the weeks have passed [unas ocho], the girl has been overcoming all the symptoms of post traumatic stress ”, explained the psychologist.

“And this through virtual sessions because due to the pandemic, they could not be carried out in person.”

Little Karina began to color in a migrant shelter in Tijuana and then went to a house rented by her family, where difficult situations continued due to the health contingency, unemployment and being in a strange land. However, the recurring activity of coloring has helped him get ahead.

In a telephone conversation with La Opinion, Dr. Romero says that he is now following the process that has led Karina “with other girls who suffered similar situations or who have high levels of stress.

She adds that coloring therapy has also worked with two little brothers from another migrant family who had to move to a very poor house, with a dirt floor and occasional pests.

How did the idea come about?

These cases are not the only cases of minors to whom the organization Families Belong Together (FBT) has helped with its book Coloring Without Borders.

The organization came up with the idea of ​​developing a coloring book that helped children who were separated by the US government from their families and sent to detention centers, usually far from their parents.

As soon as he found out about the project, the Mexican film director Alfonso Cuarón wrote the dedication.

The group brought together perhaps a score of graphic artists to provide the drawings, but the response was that 80 artists from around the world wanted to collaborate. As a result, a coloring book with more than 130 pages was published.

According to Lourdes Medrano, from FBT México, the book exceeded all initial expectations, both due to the solidarity of the artists and the print run.

“FBT United States thought to have a moderate circulation, of not many copies, but seeing how it helped children the circulation was expanded,” he said.

The organization then proposed that for each book that someone buys, another copy be donated to a migrant child.

Lourdes Medrano said that to date, by this offer, “around 500 migrant children have benefited in Tijuana, especially in the Roca de Salvación, Camino de Salvación, Ágape, Espacio Migrante and Embajadores de Jesús shelters”, where Little Haiti.

Those who have acquired it the most are parents and the general public that stands in solidarity with helping these little ones.

The book has on one page one or two sentences in Spanish, and on the other page, the same text but in English.
Dr. Romero, who was in charge of FBT to work with the book, commented that learning some words or phrases in English is one of 14 benefits that he has identified with Coloring Without Borders.

These benefits are achieved even when in this time of crisis due to COVID-19, the psychologist communicates with minors in a virtual way without direct contact from before.

On the other hand, families have been waiting for more than five months for the immigration court in San Diego to resume hearings for asylum cases.

“Children do a lot of good to be immersed in coloring, because it helps them develop attention and express what they feel,” he explained.

She adds that from an adult perspective, looking at a book with finished forms and writing something on a page can seem monotonous or automatic, but it helps young children to learn to take a crayon or crayon well and make the lines with the firmness and precision they need.

For this, the artists left the drawings unfinished, and the little ones have to finish them. For example, there is an illustration of a tiger, but the stripes are missing, and the children have to finish that drawing.

The psychologist Romero explained that so far no migrant child in Tijuana has finished coloring the entire book, but the important thing is not so much that they finish it but that they experience the well-being of coloring without borders.

Where to get it?

You can purchase the Coloring Without Borders book and thus help a migrant child in Tijuana at Centro 32, a central FBT office in Tijuana, or directly online at store.familiesbelongtogether.org/, where they also accept donations. The organization helps migrant women train other women, offers food to families without shelter and has other activities in support of migrants in Baja California.

"Fear" by Stefan Zweig on stage with the Carmina Company

Fabián Núñez, one of the leaders behind the mega-march against Proposition...

Why does health cost so much in the United States?