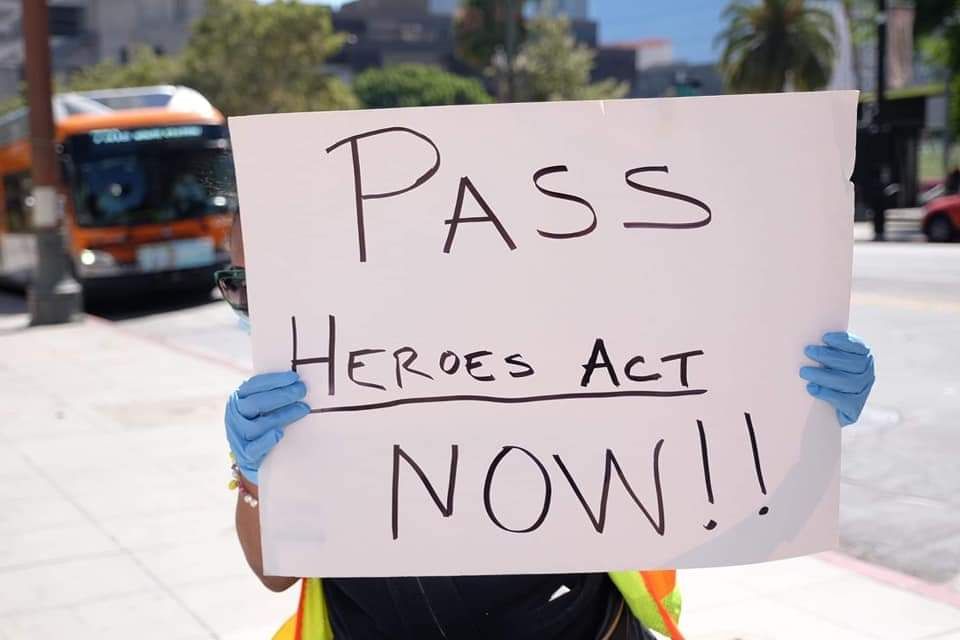 The Los Angeles County Metropolitan Transportation Authority (Metro) joined 27 more agencies across the country this week to ask the federal government for financial aid so they can survive during the COVID-19 pandemic.

Metro CEO Phillip Washington said the agency is grateful for the help of the CARE Act, which was awarded funding a few weeks ago, but it is not enough to continue to keep public transportation moving.

“Our work has been cut and we need help from Congress,” he said. “As our expenses increase, our income decreases.”

Metro cut the lines of several buses due to a lack of passengers due to the pandemic, and the agency never offered an extra payment to its employees, who are considered front-line workers.

Nersito, who has been a Metro driver for three years, said the only thing they received a few months ago was the annual increase they receive as part of their contract.

“My increase was 75 cents and each increase depends on what salary contract you are on,” said Nersito, who asked not to publish his last name.

“But this was not part of any agreement for putting our lives at risk while we work.”

The driver said that he is forced to work in these circumstances since he needs the salary. “My wife is not working and I have to,” he said.

For now, they have been trying to negotiate with their own unions to see if they support them in obtaining some kind of salary increase, even if it is temporary as it was with supermarket and pharmacy workers.

“As our contract does not say that they must give us a ‘Hazard pay’ [pago por estar en peligro] they don’t want to do it ”, explained Nersito.

“The same thing happened after the Northridge earthquake, drivers did not receive the raise because they were already considered front-line workers.”

So far, 48 cases of COVID-19 infected drivers and one deceased have been reported, said John Ellis, general president of the SMART Transportation Division – which represents Metro drivers.

Ellis acknowledged that bus drivers face danger every day but assured that they take precautions such as opening the back door for passengers to enter and not forcing the payment of the fare.

“We obtained authorization to block the area at the front of the bus to prevent people from sitting there,” he explained.

“The only time it is allowed is when a passenger with a disability cannot climb the rear entrance step, they are given the front entrance ramp.”

In response to the drivers’ well-being and wages, the Metro agency said it is unclear whether the Senate will include the Heroes Fund in its next emergency aid bill. But if so, your employees will be part of this benefit.

Without specifying exactly why there was no increase in payment in the past for Metro drivers, José Ubaldo – Metro spokesperson – said that the agency anticipates a deficit of up to $ 1.8 billion in the next two fiscal years due to the COVID pandemic- 19.

“As Congress considers a new aid package [ante el] COVID-19, it is clear that our agency will need more federal funds to keep Los Angeles County moving, ”he said.

“Metro works collaboratively with the Los Angeles County Congressional Delegation to ensure that any new aid package provides our agency with the resources we need to safeguard the transportation services we continue to provide to thousands of county residents.”

Nersito said that since the pandemic began, Metro employees – especially drivers – have asked for more protection for themselves. They have been given but, she adds, that it is not enough.

On request they can receive gloves, masks and plastic barriers next to their seats on the bus. There is also enough hand sanitizer at rest stations. Still, it is difficult to control the situation once passengers board without taking the necessary precautions.

Claudia Vigil, a Metro passenger, said she was recently forced to use transportation to get from South Los Angeles to downtown. But she was very concerned when she saw the carelessness in the trucks.

“The passengers get on without masks and the drivers don’t tell them anything. Also the truck is very full. There was no physical distancing… I was afraid to return on the bus and I better asked my uncle to pick me up. ”

Marisol García, another Metro passenger, said that in mid-June she had to take public transportation to start work. She approved of the fact that there was hand sanitizer at the bus station where her truck was waiting.

“But when you get on the bus, it seems that nothing has happened. Not everyone wears face masks. People talk like if nothing happens. “

Concerned about the situation, García was forced to purchase a car to make her trip to work.
Nersito said it is very difficult to ask passengers to maintain a six foot distance inside a 45 foot long bus.

“People since they get on want to be behind [del chofer] and I cannot force them to go back, “he said. “There are still a lot of homeless people who use public transportation just to travel aimlessly.”

On July 10, Metro workers protested to ask for the pay increase. Nersito said that if necessary they are willing to contract the “flu blue” [gripe azul], a form of protest in which you are absent due to the excuse of illness.

Why you shouldn’t live in Washington?

Why is Sacramento so cheap?

What can I do with an old concrete porch?