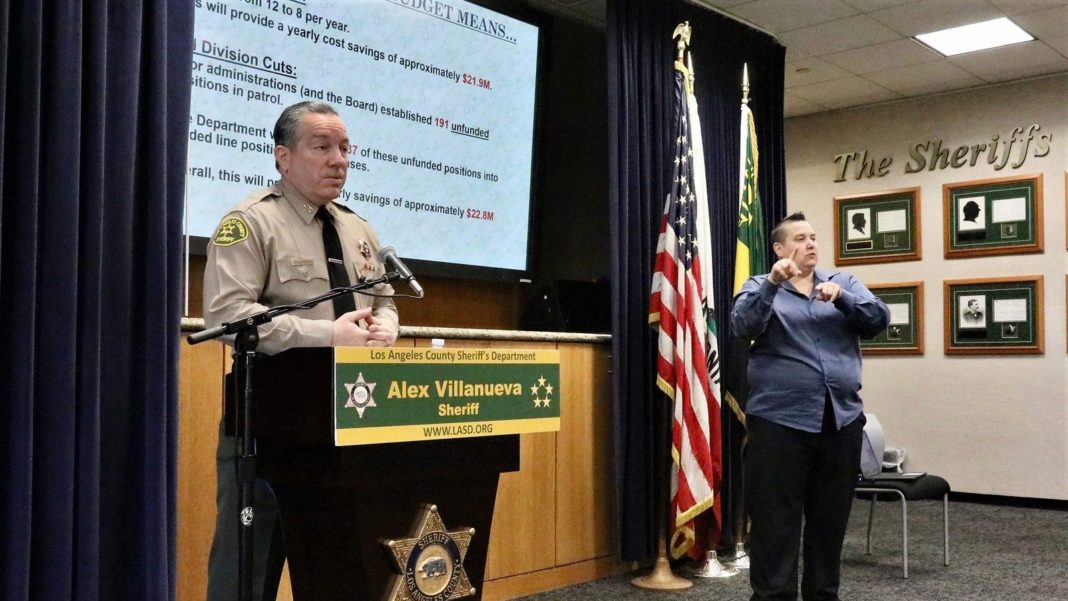 Amid the coronavirus pandemic, Los Angeles County could face yet another crisis this time around a possible Sheriff Department (LASD) budget cut.

Alex Villanueva, head of the entity, announced this week that severe changes are planned for the Department after the tentative budget for fiscal year 2020-2021 was announced, which fell short at $ 400 million.

Although LASD recommended the use of $ 3.9 billion to provide its services, the Los Angeles County Board of Supervisors only approved $ 3.5 billion.

"The Board of Supervisors leaves us in debt as if we had the flexibility to eliminate $ 400 million in law enforcement activities," Villanueva said. "That does not exist".

What would be modified?

Among the changes that could occur is the consolidation of two patrol stations. Altadena station with Cresenta Valley station and Marina del Rey station with South Los Angeles station.

"Those are decisions that we do not take lightly, they are serious decisions that will have a serious result if we cannot achieve a goal of zero deficit," Villanueva said.

The Sheriff said that in times of coronavirus, reaching out to the most vulnerable communities is vital, but it seems that in the next fiscal year, which begins July 1, 2020, this cannot be done if there is not a sufficient budget.

"I have a lieutenant, a sergeant and three bailiffs to deal with the problem of the homeless," he explained. “And I added 10 more sheriffs to help them but without the funds I am not going to be able to allow those 10 sheriffs to remain in those positions. I'm going to have to withdraw them and go back to work on patrol. ”

Other planned changes include reducing the academy classes from 12 to eight per year.
Villanueva said the Board originally requested to reduce them to four, but that would mean reducing the size of personnel by an average of 160 agents per year.

"We already have 712 vacancies in the ranks, sworn lieutenant sergeants, reducing more, only aggravates the extra time that gets out of control," he said.

"These are not negotiable positions … These are your sheriffs who work on patrol, who work in custody, detectives in the field doing investigations, they are not positions that we can simply eliminate because they are inconvenient."

In addition, cuts may occur in the Patrol Division. There are 191 funded patrol positions that also represent administrative positions and have been around for decades.

These include youth community activities and search and rescue teams, among others.
"Then we are going to take 137 of these positions, and return them to patrol," Villanueva said.

In response to the Sheriff, Supervisor Hilda Solis – who represents Los Angeles County District 1 – said there should be a fiscal responsibility for how taxpayer dollars are spent, regardless of whether the Head of the Department was appointed by the Board. of Supervisors or elected by voters.

"This is especially true at this time given the economic recession we are experiencing due to the COVID-19 pandemic," he explained in a statement.

Supervisor Solís is one of the five members of the Los Angeles County Board of Supervisors.

The Sheriff indicated that his Department is concerned that the Board does not prioritize public safety and that they only take them as one of the 37 departments they fund.

"And they cannot say that it is an expense of discretion because if I have 300 inmates sleeping in a prison, I cannot lock them up and return the next day," Villanueva said.

"Just like on patrol, when you dial 911, you're not going to want to be told: 'Well, there's no one today, maybe tomorrow we'll see your emergency.' No. You have to have those positions available 24 hours a day. ”

Is Harlem safe for tourists?

What is transfer without consideration?

How do I stop pooling water in my yard?

What part of Grand Rapids is safest?