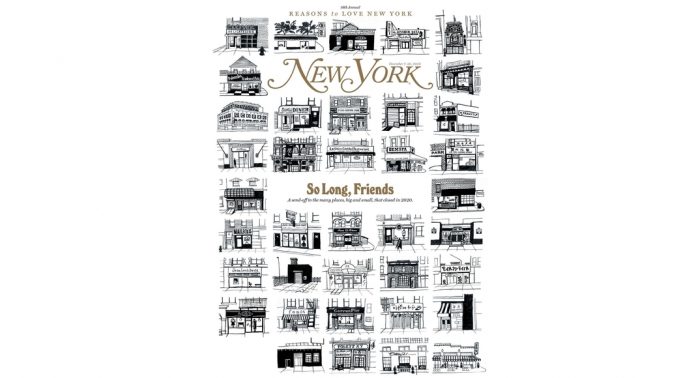 “ It’s so beautiful, but so sad “. This is the tone of the many reactions received by Jeanne Verdoux, the French artist who has just made the front page of New York magazine this week. The magazine published 38 small illustrations of New York institutions which closed their doors this year and chose a poignant title, “So long, friends”, for its cover of the week. ” I had already done several shop illustrations for New York Magazine during the year. They contacted me and I produced about forty drawings in less than a week, with a fairly free technique in ink and brush. Says the French artist, who has lived in New York for 20 years and teaches at Parson’s The New School. Among them are iconic names such as Frank’s Cocktail Bar, Century 21, Jeffrey or even Gemspa, a small unpretentious spa in Chinatown.

Places that all have unique stories, and which saw their adventure come to an abrupt end in 2020, due to the pandemic. Jeanne Verdoux, who works a lot on people and emotion, wanted to take this opportunity to pay tribute to essential places of New York life, as well as to small neighborhood shops known above all to their inhabitants. A cover that sparked a great wave of reactions, from readers who themselves have lived slices of life in these places. ” People are very touched by the drawings of these places because they have participated in their history and they make them their own. “. Thus, the owners of these places which are being closed asked to use the drawings to offer them to their employees.

The New York magazine will not stop there, and will launch a marketing operation of derivative products (T-shirts, caps, etc.) to raise funds for businesses in difficulty. For her part, Jeanne Verdoux also wants to continue this work of serigraphs of shops and businesses, in order to give back to the city what it has given us all so much. Hoping that 2021 will be placed under the sign of renewal.

More participation is sought during the 2020 Census

Why is it so difficult to tell the LGBTQ community in...