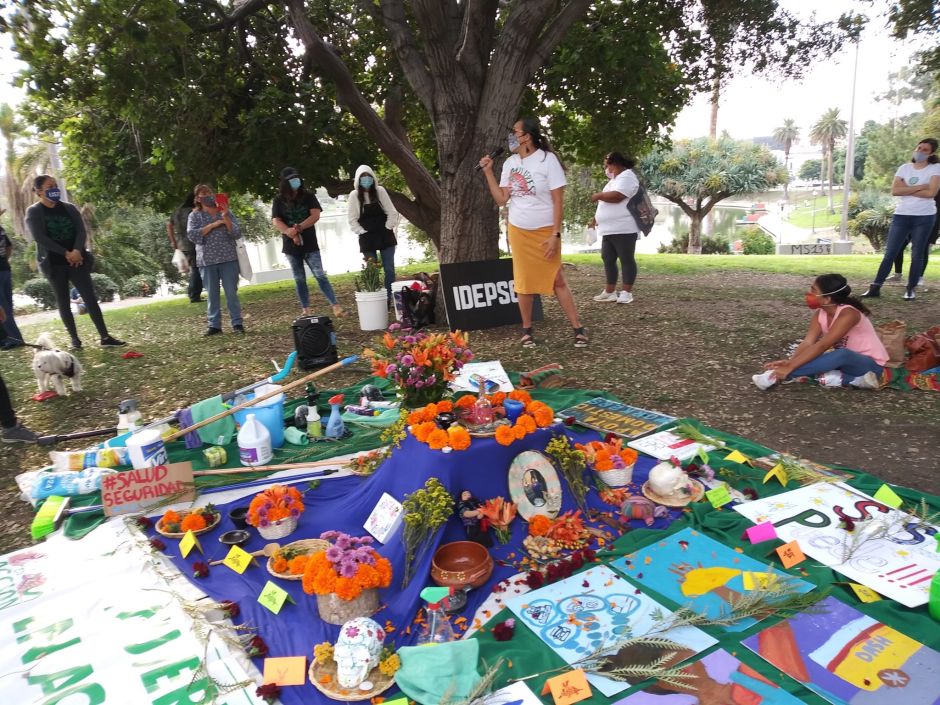 If the bill is approved, the owners will have to notify the employees of the risks that could exist in the work areas.

Activists advocating for the health of janitors (domestic) gathered in MacArthur Park Thursday to demand that California Governor Gavin Newsom sign SB 1257. The bill was approved by the legislature on August 27. However, it is still awaiting the governor’s signature.

SB 1257 calls for the removal of a historic exclusion that denies the right to domestic workers, most of whom are women, to know when there are risks in the workplace, which today are primarily private homes.

Workers like Vicenta Martínez know these risks very closely. She has worked for 22 years cleaning homes and said she was affected by the Malibu fires in 2018 when, despite poor air conditions, ash and toxic emissions, she had to continue cleaning the two houses where she worked.

“I felt the heat and the smoke on my face and my body but I couldn’t say anything,” Martínez said. “The bosses never gave me a mask or gloves or any protection.”

The bus ride from her home in the MacArthur Park area to Malibu was about an hour and a half. She emphasized that out of necessity she continued to work in those houses where she was paid approximately $ 13 an hour for about five hours.

Martínez, who is a mother of three, said that due to the low salary she was earning, she was unable to go to the doctor or buy her own protective equipment.

“And now, they are happening again. If it is not the fires, it is the toxic chemicals with which we clean that make us sick, ”said the worker. “Governor sign now. Our health and safety will be protected by this law. “

During the conference, activists and workers also set up an altar in honor of cleaning workers who have lost their lives while working.

Noemí Cruz, another domestic worker and leader of Mujeres en Acción, a group from the Institute for Popular Education of Southern California (IDEPSCA), said she has been a domestic worker for about 11 years.

She explained that she has constantly faced health problems from being exposed to toxic fluids.

“I feel burning in my throat, in my nose. There are times when we have to lift heavy things and it is more difficult to face the situation when we are working alone in a house, ”said Cruz.

She added that she was one of the volunteers who dedicated herself to informing workers of their rights to demand protection during the Malibu fires.

“We would go to the bus stops and give them the pamphlets,” Cruz said. “People did tell us that they smelled a lot of smoke but many took it as normal and worked without protest.”

SB 1257, was written by Senator María Elena Durazo (CA-24) and co-sponsored by a coalition of advocates for domestic employees including IDEPSCA, Coalition of Domestic Workers of California, Defenders of Equal Rights at Work, Association of California Employment Lawyers and AFSCME-UDW

Maegan Ortiz, executive director of IDEPSCA, said the exclusion of domestic workers is based on the 1930s when the labor laws were made. These excluded two groups of workers, household and agricultural.

“This exclusion was in that time because most of the workers were black workers. It is when they were slaves by force and later with low pay and very bad conditions, ”explained Ortiz. “Today we know that the majority are immigrants from Latin America.”

The director said that this exclusion is not only based on health and safety but has also been a matter of racism for a long time.

Currently it is estimated that more than 300,000 domestic workers are affected, according to the UCLA labor center.

How does the law work?

Ortiz said the governor has 12 days to sign or veto SB 1257. If passed, the employer would be responsible for alerting its domestic employees — such as the chambermaid and gardener — if there are risks at work.

“For example, if the boss arrives from Europe and believes that there was an outbreak of COVID-19, she must notify and provide the necessary protection to her employees such as hand sanitizer, masks and everything necessary,” said Ortiz.

If not, the employee can file a complaint with the California Department of Safety and Health (CAL / OSHA).

Ortiz said that during the current wildfires in California employers asked domestic workers to stay behind to help fight fires, protect homes and pets; in addition to cleaning toxic ashes from houses.

“We have members who are babysitters and are working around the Bobcat fire” in San Bernardino County, Ortiz said. “Governor Newsom has the opportunity to continue California’s legacy as a state at the forefront of workplace protections and against racism.”

The protesters said that if Newsom chooses not to sign the law, as COVID-19 continues to impact Latinos and smoke from the wildfires chokes the lungs of essential workers, then it will tarnish his legacy and reputation.

Democratic pre-candidates for the Presidency continue their campaign in California

The "modern beauty" seen by Edouard Manet at the Getty Center