Home Latest News In times of pandemic, 67-year-old woman comes out to help the elderly 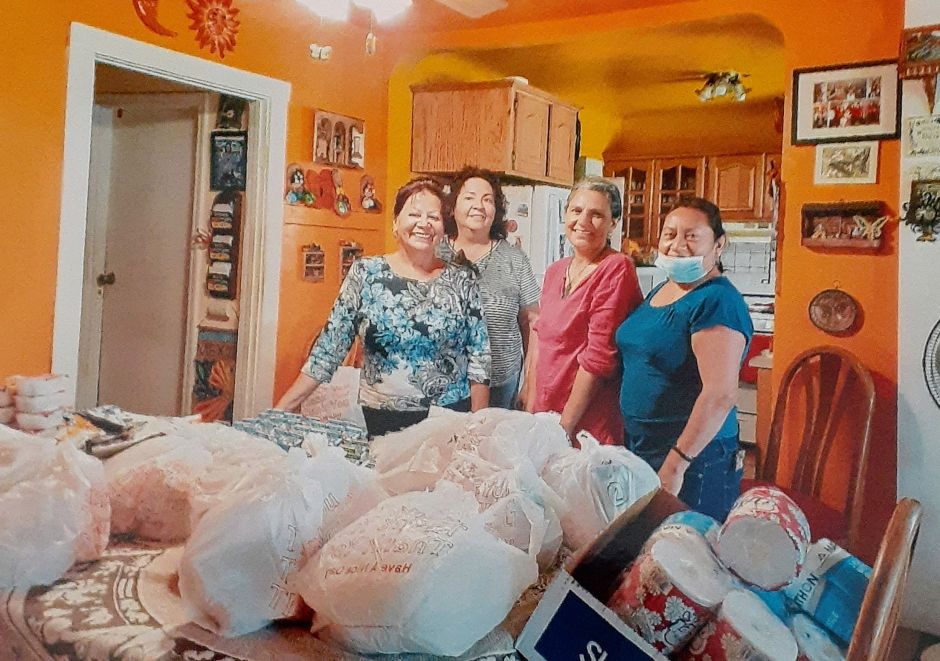 Martha Díaz and a group of friends deliver food to people who cannot go out to get their essentials in East Los Angeles.

Diaz and a group of volunteers packing the bags of food. (Supplied)

When the COVID-19 coronavirus pandemic began, 67-year-old Martha Díaz could not stay with her arms crossed and decided to go out to help those most in need.

Her main concern was making sure that seniors received hot or easy-to-prepare meals as she knew that some find these activities difficult.

Due to the health contingencies that began in March, the elderly are the most vulnerable to the spread of COVID-19 and therefore, officials and experts have asked that they stay at home.

“I know a lot of old people who need help and I had a list of about 25 people,” said Díaz, who resides in Boyle Heights and considers herself a local activist.

Díaz, who is also in the high-risk group due to his age, left behind the fear of contagion and defied orders in order to help his friends and neighbors in the area.

She immediately began looking for food donations with churches, schools, and the local YMCA. By mid-April, she was able to collect seven bags of food and as the weeks went by she was notified of more donations available and some friends volunteered. Sometimes they managed to fill up to 50 pantry bags.

“Sometimes families even came to play at my house and asked me if I could give them food because they needed for their children,” said Díaz. “Word had already spread that we were helping ”.

She without hesitation, every time she had bags of food left over somewhere she continued to deliver them.

Diaz remember that sometimes the old men gave him money, about $ 10 or $ 20 for gasoline. Instead of spending them she decided to collect them and buy basic necessities.

“Once a woman gave me money to buy soap for her to bathe and that’s when I realized that they also need all that and they couldn’t go out,” said the activist.

“Then they ask me who I’m working with or what my title is. I tell them that I am a volunteer and I am very grateful to be able to help, ”said Díaz.

In 2006, Díaz had to leave her job to become the personal caregiver for his mother Florentina Díaz, who suffered from Alzheimer’s.

“That’s when I started to get very involved in the world of seniors,” Diaz said.

In 2019 her mother passed away but this did not stop her from continuing to help the elderly in her community. She said that what most captivated her is seeing that these are times when long-lived residents suffer the most from depression due to loneliness.

“When I began to bring them food, some of them told me, ‘stay and talk’ but I carried the trunk of the car full of food that I had to continue delivering,” he said.

But he did not forget this need to calm his loneliness and sought help again. With the collaboration of a friend, they began to call several old men in the area. During the calls, the volunteers who collaborated with Martha did not ask for anything, they only talked with them so that they would not feel so alone.

Díaz said that unfortunately the entities that gave him the food stopped doing so. Last week they told him they had run out.

So now she is dedicated to mobilizing for other ways to continue feeding these older people.

“I’ve already contacted two agencies to see if they can help me,” Diaz said. “When I told the old men that they would no longer have food, they worried because they don’t know what they are going to do but I always say that when there is a will, there is a way to do it.”

´Police of Los Angeles lied in the trial against the #...

Armando Rubio: ‘My goal is to spread the culture through the...

Which is the shortest route?

California housing crisis: although around 151,000 people live on the street,...