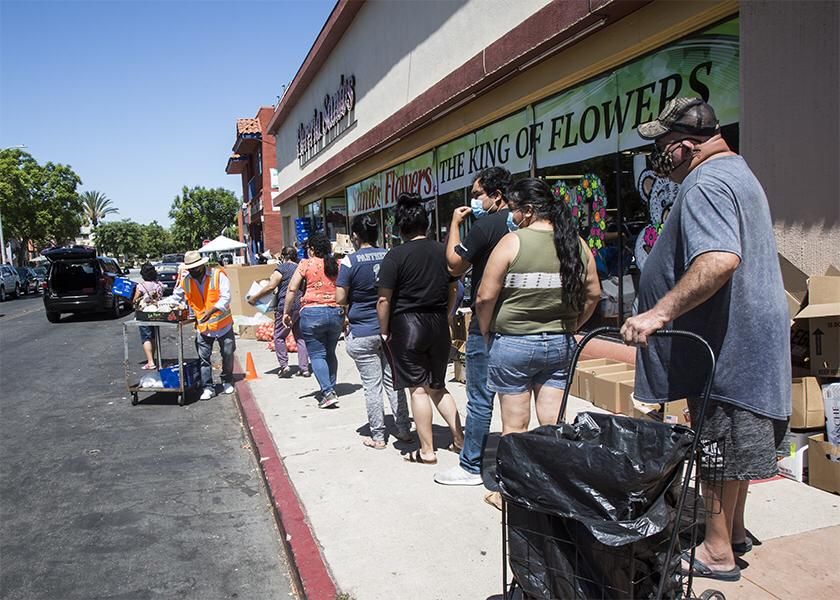 Gualterio Santos, a successful flower businessman from the city of Santa Ana, who is fighting against his deportation, delivered more than 300 pantries to families who have been affected by the coronavirus.

“We want to give back to our community a bit of how much it has given us, especially because of the pandemic, there is much need”says Gualterio, an immigrant from Oaxaca, Mexico who has a florist in Santa Ana and another in Las Vegas.

He says he was encouraged to make these food donations because many people have come to his business who have nothing to eat.

“When they marched against my deportation, many people came to support me. So with all my heart, I handed over these pantries and with enough precautions to avoid becoming infected with the virus. ”

Walter distributed the pantries on Saturday, July 18 from 1 in the afternoon. Initially – he says – he was going to put everything from his bag for the pantries, but when making the announcement, the Power of One foundation contacted him and supported him with more food.

Like him, many immigrants have delivered food to Latino communities that suffer from the lack of employment caused by business closings as a result of the restriction orders imposed by COVID-19.

The Federation of Zacatecan Clubs of Southern California, headed by Guadalupe Gómez, has distributed milk and pantries in Norwalk, Oxnard, and has shipped to the north of the state.

Also every Thursday they deliver food at the facilities of the Federation of Zacatecan Clubs in the heart of East Los Angeles.

“The need is so great that there are people who hold on crying when they receive their pantry. One day a man came when everything was finished, and he told me that if you could take a watermelon that was rotten on one side. I warned him that it was half damaged, and he replied, it doesn’t matter, we can get something out of itGuadalupe relates.

The Zacatecan leader says that it is impossible that there are hungry people in the richest country in the world. “When we have delivered milk, lines of four-block carts have formed. People drive 15 minutes to come for their milk. That tells you a lot“

And he says that at first they started distributing food and milk through the clubs, but now they also do it directly to the community.

“Seeing so much lack, we are trying to create a food bank in the Federation,” says this leader, who is overcome by emotion when he remembers that in his childhood, he himself went hungry at the Santa Juana ranch in the municipality of Jalpa in Zacatecas. , Mexico.

“In 1963, my mother sent me with a small bucket to collect powdered milk and rice that the President of the United States, John Kennedy, sent as donations. That is why I understand these people very well ”, she narrates with a lump in her throat; and confess that in his 46 years in the United States, he had never seen an economic crisis like the one experienced by the pandemic today.

Anaheim-based activist Yesenia Rojas and president of the Zapote de Cestau Club, made up of immigrants from the Mexican state of Guanajuato, says they have not only distributed pantries, but also hot food, face masks, and antibacterial gel in Latino communities in Orange County. .

“Since the pandemic began in late March, we have been supporting families who were left without work, infected people, and older adults.”

He says that they have mobilized to obtain resources from councilors, different organizations, and even Guadalupe Gómez from the Federation of Zacatecan Clubs has supported them.

Yesenia reveals that she is 42 years old, and was brought by her parents from Mexico to Los Angeles at the age of ten. “In 17 years of volunteering to help people in need, I have never seen such a difficult time as today.”

What’s more, he has had to visit houses and open refrigerators in which families only have two eggs or a package of tortillas. “It is very sad”.

The Zacatecan leader shows that the milk program of the United States Department of Agriculture (USDA) ended on June 30, but they are waiting for the re-approval to continue as soon as they reauthorize it.

“Meanwhile we continue with the distribution of food,” he says.

Vicente Ortiz, owner and chef of Don Chente, El Pescador and Tacos Don Chente restaurants, was one of the first to distribute pantries and hot meals during the pandemic.

“We deliver food from the end of March to May 10. We met several restaurant owners and chefs such as Juan San Juan de Gloria’s restaurant, chef Rocío Camacho and several others and decided to prepare food to give away with all the merchandise we had.

“We talked about it and said that we should lose it as a gift to those affected by the restaurant industry and to our community, better donate it,” says Vicente.

He says that even on May 10, Mother’s Day, they distributed food, flowers and gifts. “All the delivery was made outside our restaurants in Don Chente in Pico Rivera, El Pescador in the cities of Bell and Carson, in a restaurant in the San Fernando Valley, and we took food to Oxnard,” she recalls.

On Cinco de Mayo, they distributed 1,500 hot meals and pantries at Plaza Alameda in Walnut Creek in Los Angeles County.

LA children learn to cook in a fun and healthy way

Federal bill would legalize more than one million farm workers

If you don’t have air conditioning and you need to cool...