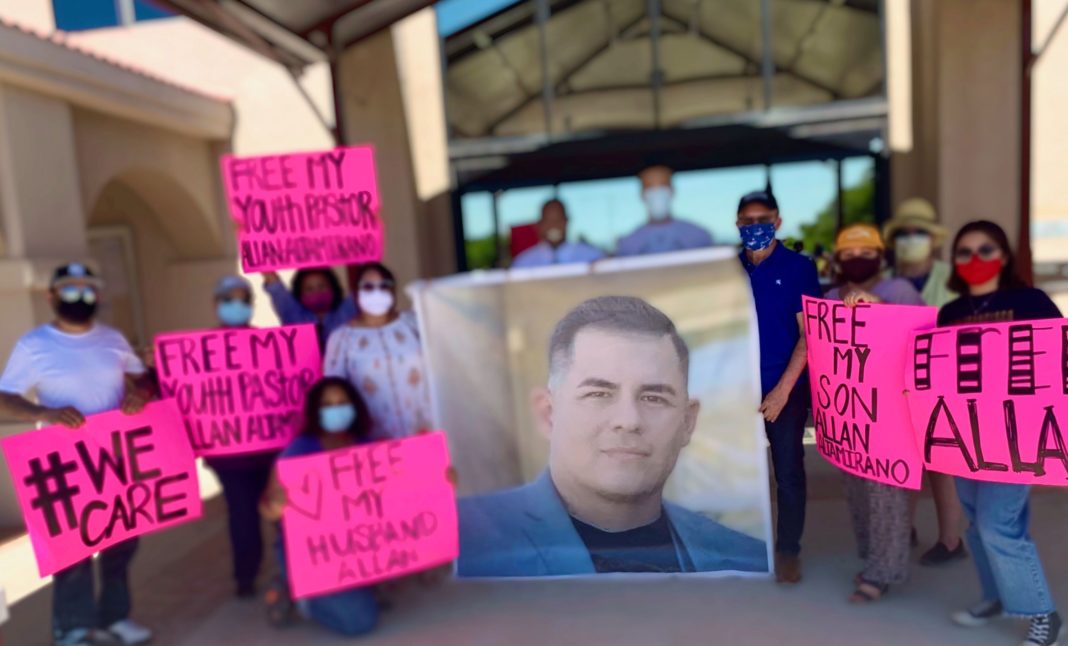 Prediabetes, high blood pressure and heart problems have a Latino father in constant fear of getting COVID-19

It has been 10 months since Allan Altamirano was detained by immigration agents (ICE).

He is currently in the Adelanto Detention Center in San Bernardino County.

The immigrant said he feared for his life since his prediabetes condition, added to high blood pressure and heart problems, make him more susceptible to the spread of the coronavirus.

The man with Mexican roots, emigrated to the United States with his family when he was just 3 years old and has lived in California since then. He is married, has four children, and is a youth pastor in a Christian church; Before arrest, he lived with his family in Eastvale, in the Inland Empire.

10 months ago while picking up one of her children, Altamirano was detained by ICE and taken to the Adelanto detention center where he has remained until now.

The authorities told him that his arrest was due to the fact that in 2004 he tried to enter the country illegally.

However, he assures that it is a confusion and adds that when he was a minor his parents requested his permanent residence.

It was for this reason that at 19 years of age he traveled to Tijuana, Mexico, mistakenly thinking that he already had his official residence document, but it was not. Immigration detained him and his family eventually mobilized to help him.

On that occasion, he managed to re-enter the country with document I-94, which maintains control of entry and exit to the United States. of people who are not citizens or permanent residents.

Since then, he has had his Social Security card and license but did not receive his legal residence.

In an interview with La Opinión Altamirano said that when he was imprisoned he began to have strange pain in his left arm and did not understand what it was. Once they took him to the doctor, they detected a heart problem.

"I am considered vulnerable due to my heart condition … I have panic and anxiety attacks too."

He added that he is concerned that gloves and masks are not used inside this jail and has seen employees who are not even in charge of disinfecting themselves.

"I have been quarantined for 14 days but in my group there are six people and we all use the same bathroom and the same microwave," said Altamirano.

"One of my group just came from Boston, Massachusetts and I don't know if he has or has had COVID-19."

He also indicated that on several occasions the detainees have filed complaints with the agents about the concern caused by the possible contagion in the running of the bulls. However, their requests to be more careful have not been heard.

Outside the detention center there is also a group of family members and activists protesting for Altamirano's freedom.

His wife, Jael Serrano, said he is concerned about her husband's health. Especially after he was recently hospitalized for a week and then he was returned to the detention center to mix with the other prisoners.

"He has lost 40 pounds and has accumulated a 198-page archive of his illnesses since entering," he explained. "He is very scared because he says that if one is contaminated, several will be contaminated."

Altamirano said it was aware of a case of a positive coronavirus in the Adelanto center and nine more cases were missing to reveal the results.

"He needs to see a specialist, not to be locked up there … If they want to let him out with an ankle bracelet for us, that's fine. We just want him to be safe. I don't want him to be delivered to me in a dead box," said his wife.

In response to this case, to the Altamirano case, ICE confirmed that on May 17, 2004 the young man attempted to re-enter "falsely claiming that he had legal status" in the country.

He also confirmed that on August 30, 2019, he was detained and is now in custody pending the outcome of his appeal and subsequent immigration procedures.

ICE noted that they take the health, safety and well-being of those in their care very seriously.

"Due to the unprecedented nature of COVID-19, ICE continues to review cases of detainees who may be vulnerable to the virus," said Alexx Pons, an ICE spokesperson. "Decisions to release people in custody happen every day on a case-by-case basis."

However, the federal office did not confirm whether or not Altamirano will be released.

Regarding coronavirus cases, Pons added that so far only a 38-year-old Belizean citizen in ICE custody in Adelanto tested positive for COVID-19.

"The individual has been quarantined and is receiving care. According to CDC guidelines, those who have been in contact with the individual have been grouped together and are being monitored for symptoms, "he added.

Aura makes it easy for its customers to pay their small...

LA restaurant sales begin to plummet as a result of coronavirus

A plane fell on a house in California and the pilot...