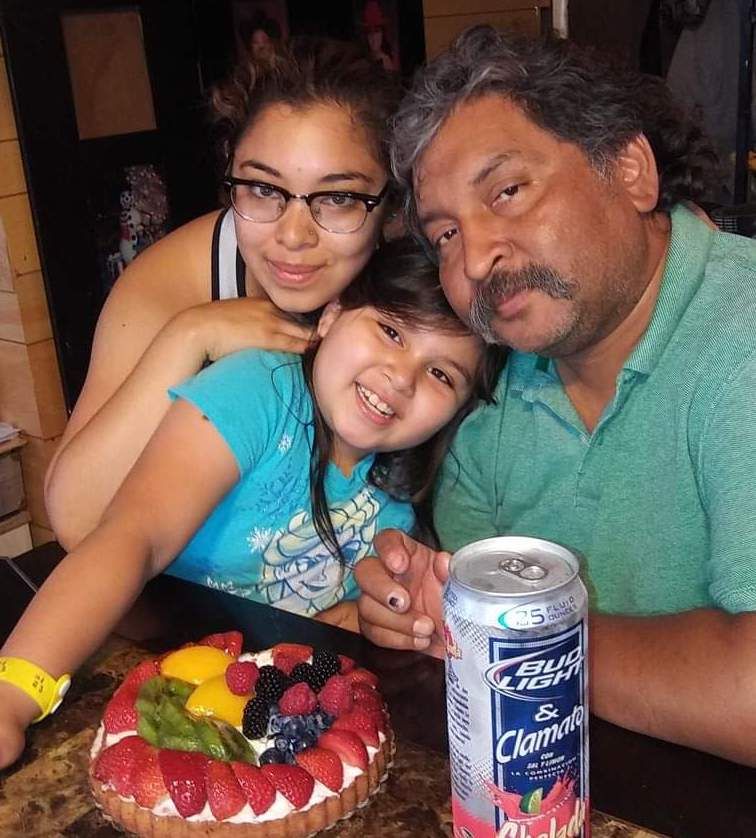 Overnight, Luis Fuentes, a Guatemalan immigrant based in Los Angeles, lost the battle against the coronavirus, leaving his family in deep sadness.

Heidy Revolorio, his wife, also of Guatemalan origin, called on the Angelina community to support them with donations, and to face the unexpected funeral expenses. The family has opened an account on the GoFundme site to collect funds.

"The world has come upon me. I still can not believe it. I think that at any moment, the door of the house will open and my husband will appear. But two days have passed, and that does not happen. I have to get used to the idea that he is no longerá ”, says Heidy, her voice broken by the feeling of the sudden loss.

This family tragedy happened very quickly. In the middle of June, Heidy started with a fever and chills, and stayed that way for a week. "I really cured myself by drinking lemon tea and aspirin," he says. He never confirmed if that discomfort was coronavirus.

By the third week of June, he was feeling well. But it was then that her husband Luis started with chills and fever. "He kept working," she explains.

However, on July 2 when they returned from eating from his mother's house, Luis's heart began to pound, making it difficult for him to breathe.

“I gave him the lemon tea, the aspirins and even a glass of milk. He calmed down and we went to bed, but again he got sick. From early on, I had told him that I was going to take him to the doctor, and he didn't want to, ”he recalls.

In the early hours of Friday, July 3, around one in the morning, Luis got worse. Heidy called an ambulance. "The paramedics coldly told me it was coronavirus; and they took him. They didn't let me go with him. ”

Hours later, at 11:30 a.m. on July 3, she received a phone call from the hospital where her husband had been taken. "They gave me the news that he had died after suffering three consecutive heart attacks and when they tried to tube him so he could breathe, he passed away."

On June 15, Luis had celebrated and celebrated his 48 years with great joy. "We broke his cake, we made roast beef, ribs and guacamole," he says.

In 1989 he emigrated from Guatemala to Los Angeles. In 2005, he met Heidy who already had a daughter, Samantha, but whom Luis raised as his own.

“As a couple, we had a daughter, Emily who is now 10 years old. Samantha, the oldest, is 23 years old. She is already married and gave us a granddaughter Leilani, ”says Heidy.

Luis worked as a cook in a Beverly Hills restaurant, and had just gotten an additional job in maintenance.

It had been just two weeks that he had returned to work at the restaurant, when he died.

“Because of the pandemic, we went several months without working. The restaurant where he worked closed; and they fired me from the cinemas where I worked cleaning the rooms ”.

Heidy says that her husband suffered from diabetes and high blood pressure.

“As a father, he was exemplary and very good. He was a friend of his daughters; and for me there was never a mistreatment. He was very playful and fun. "

He says that when the coronavirus appeared, they were wondering if it was true. "He said they were lies. I would answer him, whatever, but don't go out without a mask. We never thought it would touch us"

Heidy considers Luis's unexpected absence to be very hard. "My youngest daughter comforts me and tells me that we are going to get ahead and be fine."

But in the meantime, in addition to the immense pain that overwhelms her, she is worried about the lack of income in her home.

So he asks the community for help to pay the funeral expenses. "His death grabbed us without any money, after months of not being able to work to close the businesses."

She says she wants to say goodbye to her husband and cremate his remains. "They told me at the funeral home that we can only watch him for two hours."

Latinos continue to be the group hardest hit by the coronavirus in Los Angeles County. As of Thursday, July 2, the Health Department reported 107,667 coronavirus cases since the pandemic began. Of those, 3,454 have died. 43% of Los Angeles deceased are Latino; and 93% of all victims of the virus of all races, had pre-existing health conditions.

In order to reverse the rebound in cases from the past two weeks, authorities closed bars again, and banned eating inside restaurants. They only allow the sale of food to take away, or serve at tables outside the restaurant.

The recommendations of the authorities continue to be the use of a mask when leaving the house, frequent hand washing and living as little as possible with people outside the family environment.

"It would be very difficult", the mayor of Los Angeles anticipates...

Samuel Magaña, a hero of the community, dies