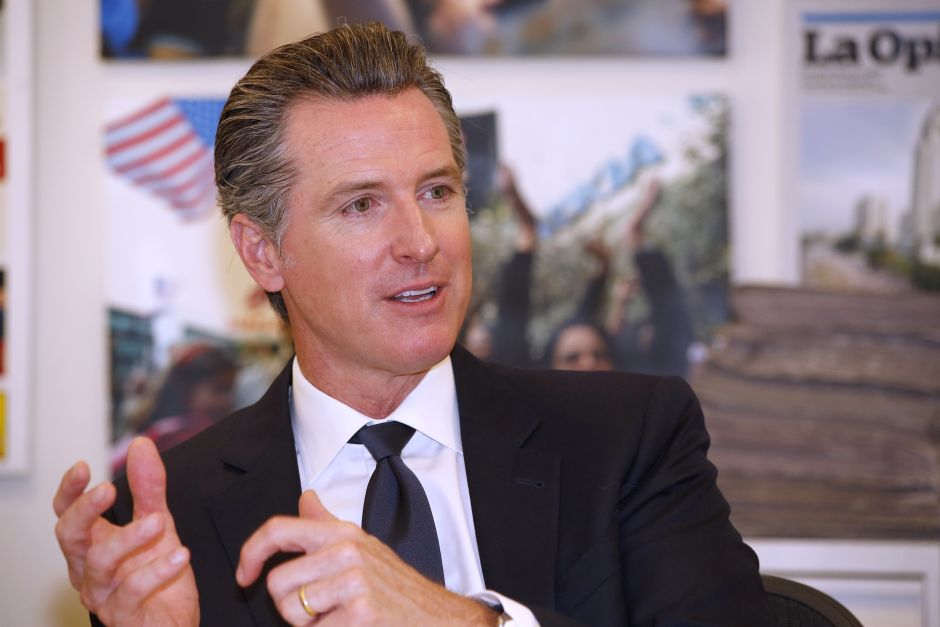 The state's unique position has allowed it to resist the attacks, says the state governor

Nine months after assuming the reins of the state government, Governor Gavin Newsom states that California, like no other state in the country, has been under continuous assault by the Trump administration.

In a meeting with newspaper editors The opinion In Los Angeles, the ruler explains that the president's attacks have to do with California's policies around the diversity of his communities, health care, education and the environment.

"Just now, I just learned of a new effort by the Trump administration to end the emissions permit program for greenhouse gases", He says.

And he affirms that the president is aggressively trying to divert billions of dollars of public security subsidies for cities and states that have sanctuary policies.

"It has gone behind billions of dollars for transportation financing, which are subsidies for improvements to highways and public safety," he emphasizes.

It has reached the limit of putting aside the procedures and protocols of the Environmental Protection Agency (EPA) to favor its political agenda and go against the state of California, he says.

As a consequence, the governor reveals that they have filed between 62 and 63 lawsuits against the administration of President Trump related primarily to the environment; and secondly with the migration.

"We have won most of them, which proves the potential of the state to survive at this time," he says.

The good news, he acknowledges, is that California has an attorney general – Xavier Becerra – who is completely aligned with his administration and the state legislature.

However, he argues that he cannot deny that five more years of the same would have profound consequences on the state.

“So what happens next year – in the presidential elections – will be deeply important. For now we are holding on because we have a robust economy, huge reserves without precedent, low unemployment in record numbers, a growing gross domestic product that is envy in the nation, ”he says.

But he warns that at any time the economy changes, it will be harder to endure the attacks of the federal administration.

On his relationship with President Trump, he says they have had a two-way conversation.

“There has been an area in which we must give credit and in which he has not yet involved his political game, and this has been the response to emergencies such as the Ridgecrest earthquake and the Wolsey and Camp fires. Although these emergencies have occurred in predominantly conservative parts of the state. I fear that it will not be so forgiving in cases where a disaster hits urban centers and the most progressive strongholds, ”he adds.

The governor believes that Trump has a great reverence for the power and strength of the state. “He recognizes that we resist exceptionally on our own, that we excel. There is respect for the president of Congress, Nancy Pelosi, for Adam Schiff, because we are the fifth largest economy in the world and for our success and entrepreneurship, ”he says.

And he concludes by saying that Trump cannot treat California as he treats other states. “We have a population larger than 21 states. In the world, outside of Germany, Japan and China, there is no economy as big as California's. That is why he has been very aggressive in his assault on us, ”he says.

The governor of California reaffirmed his commitment to give health insurance to undocumented elders next year. (Aurelia Ventura / The Opinion)

“Giving health insurance to all undocumented immigrants would cost us 3 billion dollars a year. We cannot do it now, but I have already made a public commitment that next year we will give medical insurance to undocumented older adults 65 years and up. The only thing that could change that, is that there is an economic recession, but then we would have to make general cuts to everything, ”he says.

And he reiterates that he is committed to universal health coverage that protects everyone, but it will take a few years.

The governor admits that his policies in favor of immigrants, has caused criticism and not being well received in certain parts of the state.

“I live in Placer County, a very conservative area of ​​California. That's why I can't even go out and buy coffee, ”he says.

And that leads him to remember that one of the first things he did as a ruler was to allocate $ 20 million to open the rapid response center for asylum seekers in San Diego.

The governor points out that his priorities are access to housing, homelessness and inequality in income and wealth. "We are the richest and poorest state," external.

To achieve his ambitious goals, he wants to be a bold governor because he wants to solve problems.

“I am proud that we managed to establish the most aggressive control of income in the state and the country, and put protections to avoid unfair evictions of tenants,” he says. And he says he signed 18 new laws to build housing. "We put almost 2 billion dollars for revolving loan funds and new tax credits to boost construction," he says.

Regarding homelessness, he was concerned that cities and counties including Los Angeles have not spent more than $ 900 million on mental health for the homeless.

"We will need to see better results and aggressively address the housing agenda because one of the state's priorities is to reduce the issue of homelessness," he says.

And he advances that in January he will announce a comprehensive reform of the mental health system and the Mental Health Services Act. “I brought the former director of the Obama Mental Health Institute, Tom Enzo to advise me for six months. This is one of the reasons why we have a pool of unused money in counties and we have to change the rules so they can get those funds faster and focus on early brain health intervention, ”he says.

From California, Emmanuel tries to get the swing states to vote

Freelance writers and freelancers suffer from the consequences of the coronavirus