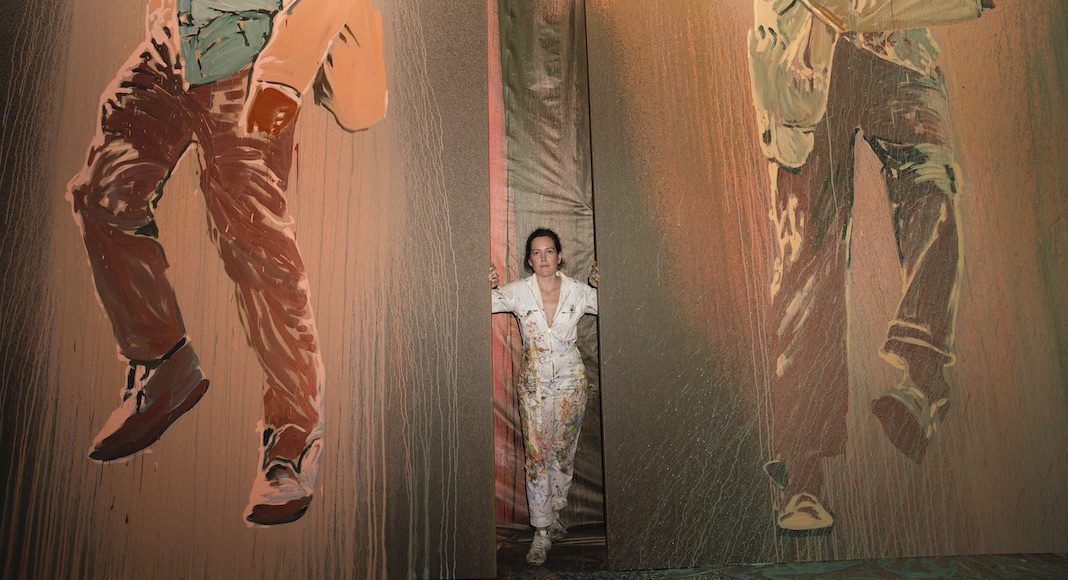 "The Pull of The Sun" by Claire Tabouret

Shanghai, Paris, Los Angeles, London, Tokyo, Madrid … In recent years, Claire Tabouret's paintings have been exhibited around the world at a frenetic pace. But it is in the city of angels that the French artist, born in 1981, has settled down since 2015. And she presents her second exhibition in her adopted city, entitled “The Pull of The Sun” until March 21st. “It’s an opportunity for me to share my work with those around me”, she says.

Relatives that the artist decided to represent on works of small and medium formats, this time. “I reactivate the first representation of painting, figuration by portrait”, details the one who wanted to offer a more “intimate” exhibition. Like the subject, made from personal photographs, the artist's palette evolves in this series, using more garish colors, and playing on the contrasts between light and shadow. Thus, the people she loves, represented on a fluorescent background, seem to be irradiated with light.

The subject, always figurative and enigmatic, will be quite different at its next exhibition, in May, in South Korea; or the one scheduled for Tokyo in September.

Originally from Vaucluse, Claire Tabouret is a born artist, although success is long overdue. "Child, I painted … I was drawn to museums like a magnetic magnet", remembers the artist. Driven by this passion, she then followed the Fine Arts training. For ten years, the Frenchwoman will go from odd jobs to odd jobs, painting imaginary and psychological situations in her spare time. She gropes, searches for her style, like galleries where to exhibit. Until a collector, alias the billionaire François Pinault (Kering), sets his sights on his figurative and committed canvases talking about childhood. The effect is immediate: his paintings sell like hotcakes. “Things were chained in a hectic way, I was able to exhibit in large galleries”, she admits.

In 2015, when her career exploded, she wanted to move, to start again elsewhere. "It was something very impulsive, a desire to go into the unknown." Because she doesn't know anything or anyone in Los Angeles. Only its reputation as an artistically dynamic city. An expatriation that immediately suits him, the French artist being seduced by the space that the city offers, and in particular that of his studio in Atwater Village. “Here, solitude can be chosen, the city is both calm and teeming”, she admits.

Professionally, this choice puts it back on the wall, upsets its gains, while opening the doors to many American galleries.

“I consider the paintings as my children”

A necessary upheaval in his quest for an artist. Painting, she speaks of it as obvious: "It is a daily need. As soon as I wake up, my raison d'être is to paint. ” More than that, "It offers a way of understanding the world around me, a search for the infinite. I'm so fortunate that it resonates with other people. "

In these autobiographical paintings, she tries to transcribe human relationships, whether they refer to the individual in the group, to the couple or to relationships of domination. "I consider the paintings as my children, they all have a reason for being, even those who are imperfect."

And the 38-year-old Frenchwoman wants to open up to other media. She is working on a book project, a retrospective of the past ten years, as well as on two fashion collaborations – expected in September. "I have a desire to diversify, to get the painting out of the frame of the painting and the art world to bring it to the street", argues Claire Tabouret. "One of the artist's responsibilities is to provide meaningful content in the images."

"The Pull of The Sun" by Claire Tabouret

No the “travel ban” is not lifted

Tribute to Tomi Ungerer with the Union Alsacienne –

Koala, the Frenchy start-up which wants to put an end to...