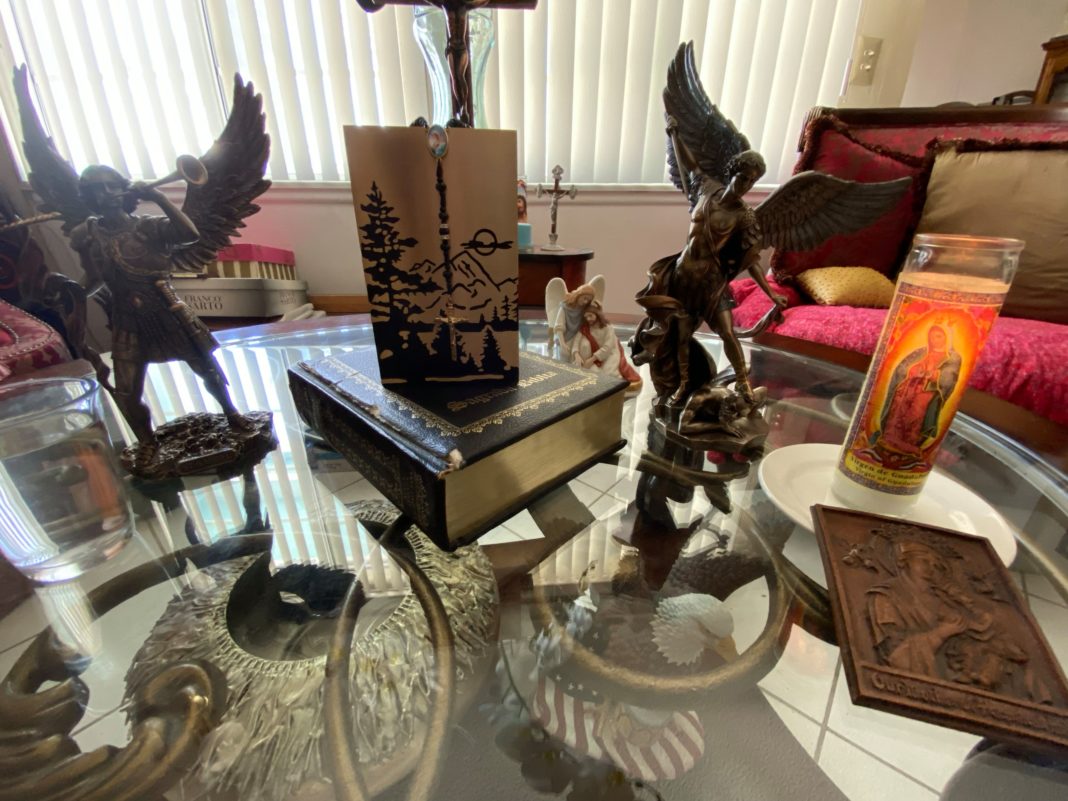 Many families who have lost their loved ones to the coronavirus have been very depressed because, due to the restrictions imposed to prevent the spread, they have not been able to be near them in their last moments of life, nor offer them funeral services to honor your memory.

Imelda Beltrán lost her mother-in-law on April 9 to COVID-19.

"There is a lot of frustration. We are waiting for the pandemic to end to offer you a mass, and take your ashes to scatter in the Yellowstone Mountains as you wished; and to offer her a funeral service worthy as she deserves it", He says.

Merry Ruth Rodríguez, Imelda's mother-in-law, had been born in Mexico in 1941. But from a very young age, she was brought from the Mexican state of Sonora to live in Los Angeles.

"I feel very sad. Maybe many people will be able to say that she was older, that she had lived her life, but she was very active and always full of energy. At his age, he was still engaged in real estate and upholstery. I shouldn't be dead, ”shares Imelda.

Her mother-in-law started feeling bad in late March. It gave her the chills, she felt achy in her body and stuck up.

On March 29 he went to see the doctor. They diagnosed her with viral pneumonia, and still sent her home.

As Merry continued to feel ill, she returned to the doctor on March 31. It was then that they told her it was a coronavirus, and they admitted her. He no longer left the hospital.

Imelda says that Merry's three children were unable to visit her, due to restrictions imposed by the health contingency.

However, on April 8, his eldest son William became desperate and went to the hospital where his mother was hospitalized. He had been fighting for days to see her. After showing the doctor, proof that the coronavirus examination had been done and came back negative, they authorized him to see her through glass. "My mother-in-law looked very bad," says Imelda.

“My mother-in-law's body was delivered to the funeral home in a plastic bag. To get her out, and that we could see her, she wanted to charge us more because they had to give her a chemical-based treatment. We decided it was not necessary. In addition we could only go to see it in turns of four people, "talks Imelda.

In the end, the family decided to cremate her. "My husband and I take his ashes home. I made him a small altar where I placed the urn. Within days I began to feel bad. I organized a rosary with the family and we prayed for Zoom ”.

In the wake of the pandemic, the Center for Disease Control and Prevention (CDC) put in place a number of rules for funeral services during the health crisis. When a person has died of coronavirus, it is forbidden to touch the body, kiss it, shroud it and wash it.

Rocío Valles Báez of the Palacios de Los Ángeles Funeral Home says they are working under many restrictions. "The services can only attend eight people," he says.

Despite the limitations, he estimates that 50% of mourners prefer to carry out a funeral service; and the other 50%, decide to cremate the body and wait for the pandemic to pass to celebrate the funeral parlor.

"The other problem we are seeing is that before, the documents that we needed to move a body to Mexico took weeks and a half. With coronavirus, it takes a month and a half"

In the context of the global pandemic by COVID-19, the Mexican Ministry of Foreign Affairs (SRE) released a guide for the transfer of remains or ashes of Mexican people who die abroad.

"The Government of Mexico, through the Ministry of Health, has indicated that the final disposal of the corpse should preferably be by cremation since the ashes represent a lower risk in health terms and also a lower financial cost," they indicate.

In the event that the family opts for burial in Mexico, the funeral home in the country where the death occurred must comply with the guidelines for general and massive handling of corpses by COVID-19 in Mexico, they point out.

Beginning April 2, the Archdiocese of Los Angeles announced that all of its cemeteries and funeral homes were closed for regular visits and other non-essential matters.

Se established a limit of two people per family to organize a funeral and make arrangements in a cemetery, and all services were limited to a maximum of ten people.

No services for infected

Carolina Díaz, director of the Latin American funeral home in Los Angeles, affirms that in her case, when a person dies of causes not related to the coronavirus, they allow cremations and burials with religious services for two hours, and the presence of ten immediate relatives.

"They have to come with masks and gloves. They cannot offer coffee, bread, or bring children, "he says.

When someone dies of coronavirus, there are no funeral services. "Cremation and burial is direct"

He clarifies that they do not authorize video recordings or live broadcasts of funerals and burials.

And regrets that due to the stoppage of activities, caused by COVID-19, the transfer of bodies to Mexico, it takes a month.

"It is very hard for families because they are going through a difficult financial situation, they are locked in their house, and then they have to go through the loss of a loved one, and wait to bury him because the Consulate and the Ministry of Health are not working "

Carolina asks people to become aware that the coronavirus is something real. "Many think it is political, but this is real. I see it daily. "

William Rodríguez, Merry's eldest son, says that not being able to be with his mother in the last days of his life, made him feel useless, anguished and in a lot of pain.

"In February, my cousin died of cancer, and I was with her every day until she left."

But not being able to accompany the most important person in his life, due to the virus, has affected him greatly.

"I fully understand that they don't want more people to catch it; but I'm still thinking, why did my mother have to leave this world like this alone, without company ”.

A sheriff shoots a man with a sword in a school...

Learn about the help for immigrants available during the pandemic

Foie gras is no longer banned in California, a “symbolic victory”...

The Census seeks to hire thousands of angels this Friday and...