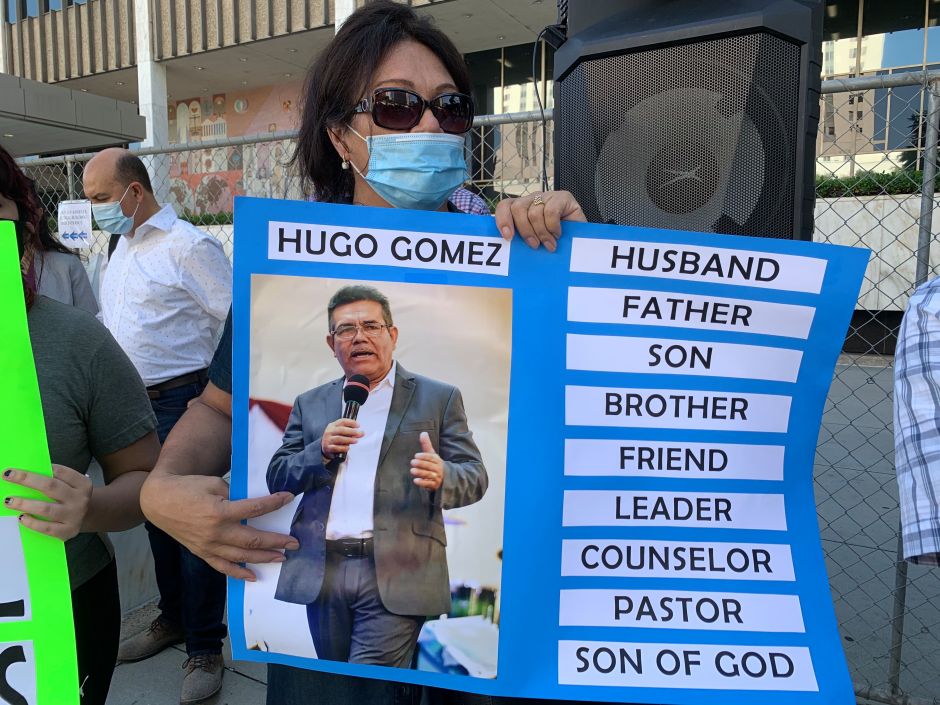 Mothers, wives and children of immigrants who have fallen ill with coronavirus in the Adelanto Detention Center where they are in custody, began a hunger strike for five days outside the Immigration and Customs Service (ICE) building in downtown Los Angels to demand their release.

“Free our loved ones infected with COVID-19, the sick and the elderly! Stop your suffering! “, demanded through tears, the pastor Leonor Gómez.

She said that it is not easy for her to sit down to eat when she knows that her husband, Pastor Hugo Rolando Gómez “is served vomiting for food”, sleeps on a cement bed; and after acquiring COVID-19, they have kept him in a cell for three weeks without seeing the sun.

“My husband – an immigrant from Guatemala – is 61 years old, he has been locked up in Adelanto for three months, he is the father of our three daughters and he is ill with coronavirus.”

Screaming with pain, the pastor revealed that they have been in the country for more than 34 years in which they have served the community, helped addicts to rehabilitate, and marriages and families not to disintegrate.

“Today they disintegrated my family. I have not had my husband in the house for more than a year. With all my heart, I say to the director of ICE, David Marin: Adelanto is a modern assembly center that should not exist”.

Pastor Leonor concluded by saying that her husband’s arrest was torture. “Now that she is ill with coronavirus, they only give her tylenol.”

It is estimated that the number of patients with COVID-19 has already exceeded 100 in a population of 784 in Advance. “Those most affected are those with health conditions or an advanced age,” as revealed by Pastor Guillermo Torres, spokesman for the organization Clérigos y Laicos Unidos por la Justicia Económica (CLUE).

“The communities are going to join the fast, one, two and even five days. This hunger strike was inspired by mothers because they can no longer bear Adelanto’s nightmare, ”said the priest.

Jasia and Vera Topete, 51-year-old daughters of José Topete, denounced that their father has been detained in Adelanto for more than two years. “He suffers from various mental health conditions and was sexually abused by other detainees,” said Jasia, who never imagined that her father’s situation was so serious.

“He got sick with the coronavirus; and he was already recovering in a cell where they put him alone, but they added two people with COVID-19”.

Vera begged the authorities to close all detention centers. “What they are doing there is genocide; and you see what came out of the women who are sterilizing in a Georgia detention center. “

“He suffers from the heart. He was hospitalized for a week, and they have already returned him to Adelanto, but we are afraid because his problem puts him at high risk of catching coronavirus, “he explained.

“I feel too sad, desperate because my husband has been detained for 13 months now. He’s already been hospitalized and we don’t want him to die in there. We have four children ages 10, 5, 4 and 2. He is 34 years old. We want them to let him out, ”Jael urged.

Pastor Ada Valiente, leader of the organization We care, said it is very painful that ICE does not send home detained immigrants with severe medical conditions and at serious risk of contracting the virus.

Teach us that you are a man of faith. No more talks. Speak in public what you tell us in private. We no longer believe anything. Have compassion, ”the pastor told the ICE director.

The Coalition for the closure of Adelanto #ShutdownAdelanto, which calls for the immediate release of the detainees, denounced the following conditions in Adelanto:

The United States lifts entry bans for some Europeans