Home Latest News Education: the joy of children in hostels in Tijuana 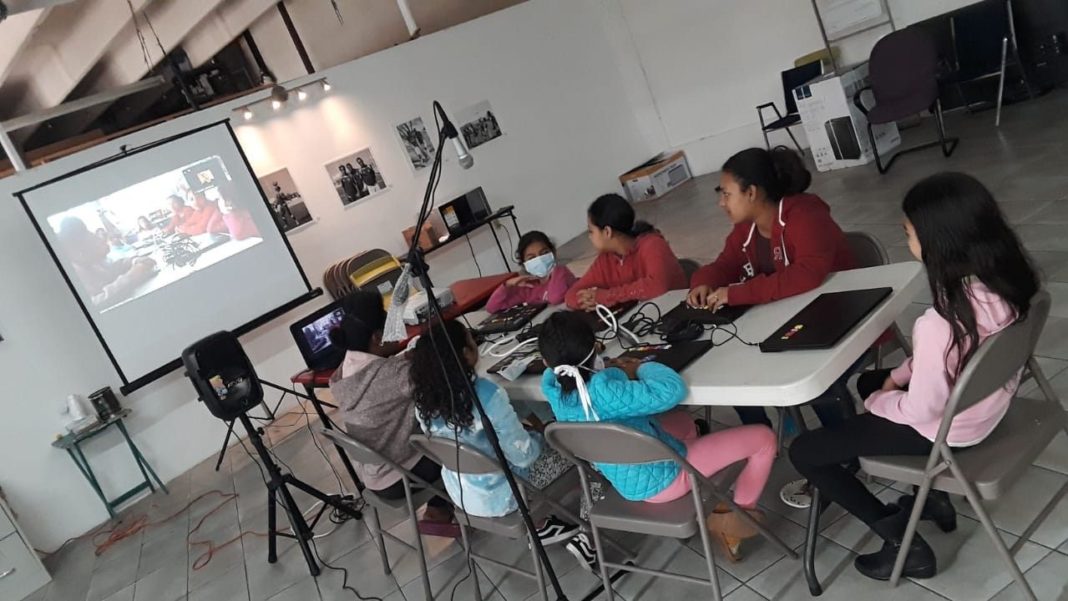 Stacy Isabel is 11 years old and for a couple of weeks she has been getting up with a lot of emotion every morning in a shelter in Tijuana, Mexico, to have breakfast, get ready and go to class.

"I have never seen her so happy," Ginna Zelaya – the girl's mother, told La Opinion.

"She wakes up happy because she knows that after a while her classes will begin and she herself sees that she is learning very fast."

Both arrived in Tijuana from Honduras a year ago and the mother indicates that "this has been the best season", since Stacy Isabel has already been enrolled in a program in which she learns what until recently was not even a dream to practice: computing, english, spanish and math.

A light in uncertainty

Since the pandemic hit the United States, hearings in immigration courts have been suspended and thousands of migrants like Ginna and her daughter have been stranded in shelters along the border without knowing when they will have a next opportunity.

Ginna said that because of the classes that Stacy Isabel takes, "the wait is no longer so heavy … Knowing that she is taking advantage of so much time has been a blessing."

The classes are part of a project that seeks to provide migrant children at the border with "access to a life-changing education," according to Tom Wong of the University of California, San Diego (UCSD), who had the original idea.

Wong heads the Center for American Migration Policy at UCSD and a few months ago commissioned university students with a survey of the situation and needs of migrants in shelters in Tijuana.

The investigation revealed that in the long wait for asylum claims, the lack of education for the children was one of the most felt needs of families.
Stacy was in Tegucigalpa, Honduras, the fifth grade when she had to flee with her mother, due to threats.

For a year, the girl had lived in a shelter in Tijuana where she had at least shelter, food, and security, but she felt that time passed without her continuing her education.

United for a change

Wong commented in writing that "we are witnessing a lost generation of asylum-seeking children in our backyard, because many (migrant minors) cannot access the educational system in Mexico."

But in mid-April, at the conclusion of the investigation, the center Wong runs became associated with the Espacio Migrante shelter – the only place that has a refuge on the second floor and a cultural center on the first floor.

The plan included the CreatePurpose group, which provides education to orphaned children and children from vulnerable communities.

"My center had the resources, Espacio Migrante had the space and the desire to help, and CreatePurpose had the curriculum," Wong said in written statements.

Paulina Olvera Cáñez, founder of Espacio Migrante, said that the United Nations High Commissioner for Refugees (UNHCR) delivered on May 26 a batch of 24 laptops to start the project.

"Our original idea was to include children from other nearby shelters, such as those of Central American families in Juventud 2000," which are located about three miles away, "but the health crisis was overcome and they were unable to attend."

The plan began with the few children in Espacio Migrante, with specialized CreatePurpose teachers, who teach in a fun way.

In addition, a shelter assistant is continually on the lookout for teachers at this stage of remote teaching needing anything.

Nick Sandoval, the founder of CreatePurpose, explained that "just like children in orphanages, children seeking asylum face many of the same challenges, especially the lack of access to education."

But even with a small group, for Paulina Olvera the important thing is that the project started and the results, just weeks away from beginning, begin to show.

"Seeing Stacy Isabel happy also makes me happy," said Mrs. Ginna Zelaya. "We left our country to escape in search of a better life, it means a lot that she is learning like this."

Paulina Olvera commented that the plan still requires connectors, cables, routers, because computers will only be able to connect to the Internet with physical cables, without WiFi.

"Those who want to help us in this project or migrant families during the pandemic, all support is well received," he said.

To do some collaboration with this project or with the families in the Espacio Migrante hostel, you can visit: paypal.me/EspacioMigranteMXN

In need of movies? MyFrenchFilmFestival returns from January 15 to...

What is the poorest county in Ohio?

What is the best low-maintenance driveway?

Ridley-Thomas: Homelessness, the other crisis in Los Angeles

Why does Jacksonville Florida smell?