Home Latest News Easter Sunday, a different celebration but with a lot of faith 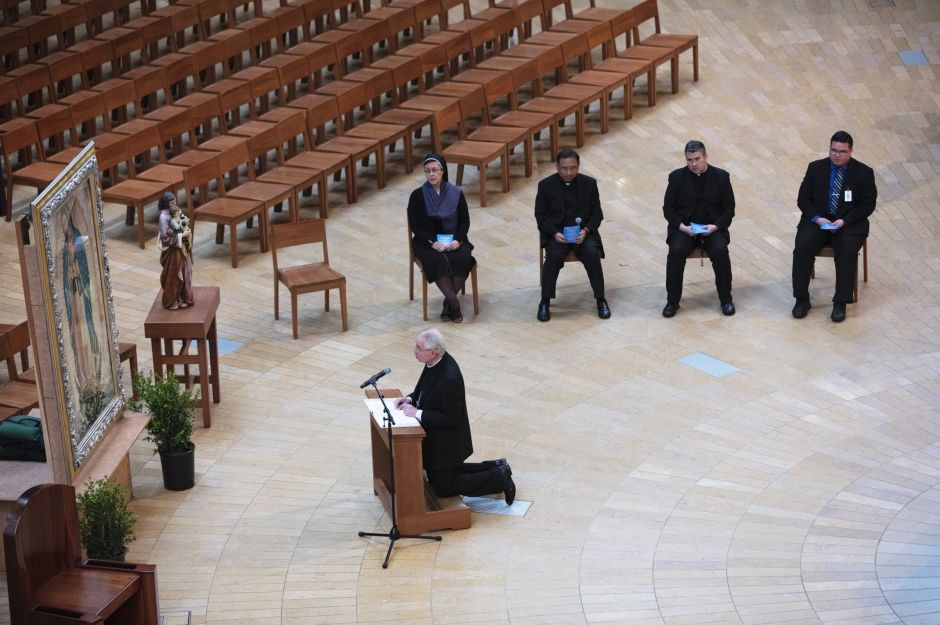 Ana Estrada, a parishioner from the Catholic Church, said that she and her husband attend Mass regularly, especially during the celebration of Lent and Easter.

However, he says that this year —due to the coronavirus pandemic— the couple will not be able to attend any religious celebration.

"I am sad because we did not even go to Mass on Palm Sunday but here at home we are listening (to the liturgy) through the media," said Estrada, who lives in south central Los Angeles. "We only lack communion."

This year, religious celebrations will have to be conducted in a very different way – behind closed doors – as large groups are prohibited from congregating to prevent the spread of COVID-19.

Estrada commented that her son-in-law managed to get her a palm for Palm Sunday and that it comforted her.

For his part, Manuel Chávez – who is a deacon of the San Anthony Parish church in San Gabriel – said he is taking the situation as what Lent really should be.

"(Sometimes) we say that for Lent we are going to stop eating or drinking something, but today we are living Lent … And we see that the cross weighs," he said, referring to the fact that today families in California must stay home after the order of the authorities to protect the community.

Chávez said that this is a mandate from God for all those who have made excuses that they do not have time for their family and their home.

"Now God tells us: 'Get into your house and there you can find yourself,'" said the parishioner, who is facing the pandemic with his wife, daughter and grandson.

Easter week started on Wednesday but this year it will be celebrated in a very different way. Churches are still closed and Los Angeles Mayor Eric Garcetti announced that all Los Angeles County parks will be closed this weekend in order to avoid meetings on Easter Sunday.

The objective is clear: to prevent the spread of the virus.

Through a video message, the archbishop of the Archdiocese of Los Angeles, José H. Gómez, asked that the homes become a “domestic church” and not forget the needy.

"They can pray for all the deceased, those who are sick, those who are caring for the sick and those who provide essential services to our communities during this time of need," he said.

He added that future generations will remember this time as the long Lent of 2020, which has been a time where disease and death suddenly darkened the entire earth.

Today, Friday, Archbishop Gómez will lead the Litany of the Sacred Heart of Jesus for the end of the pandemic, on behalf of the bishops in the United States, as a national prayer.

Said prayer will be broadcast live on the Cathedral Our Lady of Los Angeles Facebook page at 9:00 a.m.

In addition, he invited the parishioners this Sunday to watch on UniMás (Channel 46) at 7:00 a.m. Mass in Spanish and on KCOP (Canal) 13 at 10:00 a.m., Mass in English. Both will also be live on the aforementioned Facebook page.

Saturday at 5:00 p.m. A Seder will be broadcast on saturdaynightseder.com to support the Centers for Disease Control and Prevention (CDC) Foundation Coronavirus Emergency Response Fund.

The Seder Plate is a piece of tableware that carries 6 ceremonial foods such as twigs of bitter herbs, touches of jaroset (a sweet paste), pieces of lettuce, containers with salty water, among others.

During Passover Jews are not allowed to eat or possess any food made from wheat, such as barley, rye, spelled, or oats.

However, not all churches followed the orders of the health authorities.

In Thousand Oaks, Godspeak Calvary Church opened its doors on Palm Sunday to give communion to its members.

Disappointed that the churches were not considered an "essential" place, Pastor Rob McCoy resigned from his position at Thousand Oaks City Council a day earlier, saying he planned to violate state orders and would open the church.

However, the measure of staying at home is stronger this week than in previous days, since it is estimated that this could be the one that increases or minimizes the infection curve significantly.

For this Thursday at noon, the public health authorities of Los Angeles County announced 7,955 cases of infections and 223 deaths.