Home News & Politics At the Brooklyn Navy Yard, Frenchmen in the "war effort" against the... 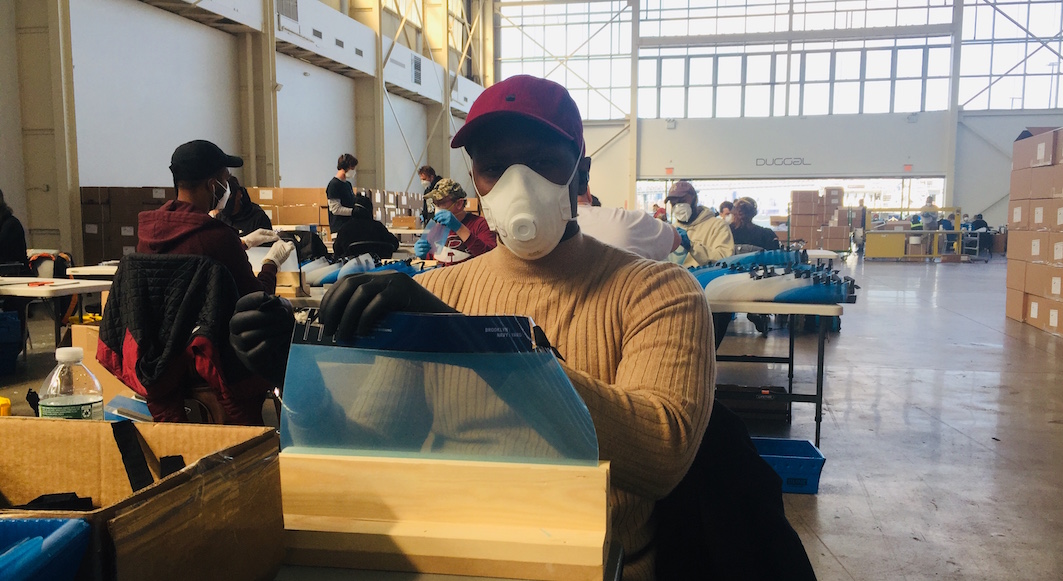 “I am a Frenchman who makes masks in the United States“. When Alhou Sarre says these few words, he himself seems to have a hard time believing them. This graphic designer from Bobigny (Seine-Saint-Denis) is one of some 200 little hands at work in the Duggal Greenhouse, a large reception hall of the Brooklyn Navy Yard transformed into a mask manufacturing with visors for medical personnel.

Like the other paid volunteers recruited in a few days to participate in this initiative piloted by several Navy Yard companies (Duggal Visual Solutions, Bednark Studio…), he spends his day sitting at a table at least two meters away from his comrades. This Wednesday, April 1, he is cutting elastic bands on one of the eight production lines installed in this large hangar-like space, which yesterday hosted concerts, weddings and TV shows. “I see it as handling, with the concern of saving more lives. It’s more rewarding. It motivates“, He confides, his masked face and his gloved hands.

This Frenchman married to an American arrived in New York at the beginning of March, before the first containment measures. He was far from suspecting that he would participate a few days later in what some described as a “war effort”Against the Covid-19. Launched two weeks ago, the factory now produces more than 20,000 masks a day – a volume that is constantly increasing. Other companies in the Brooklyn Navy Yard, a former shipyard that has become an industrial hub in recent years, are participating in their own way in the fight against the virus. Kings County Distillery, located at the entrance to the Yard, began making hydro-alcoholic gels. Place of construction and repair of American military ships during the Second World War, the Brooklyn Navy Yard is once again mobilized, but against an invisible enemy this time.

The mask factory was set up in just four short days, with the agreement of the authorities. Among those overseeing this impressive operation, the Franco-American Jeremie Gueracague, a solid fellow graduated fromHigher School of Commerce and Management (ESCEM) and brother-in-law of Alhou Sarre. Normally, he is the director of manufacturing at Bednark Studio, an experiential marketing company. “We are very busy. It’s a lot of planning. We have to organize the arrival of volunteers and make sure that the materials we need arrive“, He explains. Everything here is set up like musical paper: each volunteer must pass a temperature control on arrival, disinfect their hands and put on a mask and gloves. “Among the volunteers, you have people from the real estate, restaurant owners, baristas … We give them a job, pay them above the minimum wage and we help people on the front line. We participate in the war effort”.

These days, the Franco-American from La Rochelle, where his parents still live, turns to “the adrenaline“. “At Bednark, we often come up with crazy ideas and find a way to make them happen. This is what we did herehe said. We can make a difference, so we do it“.

What I Wish I Knew Before building a house?

What is the nicest area in San Jose?