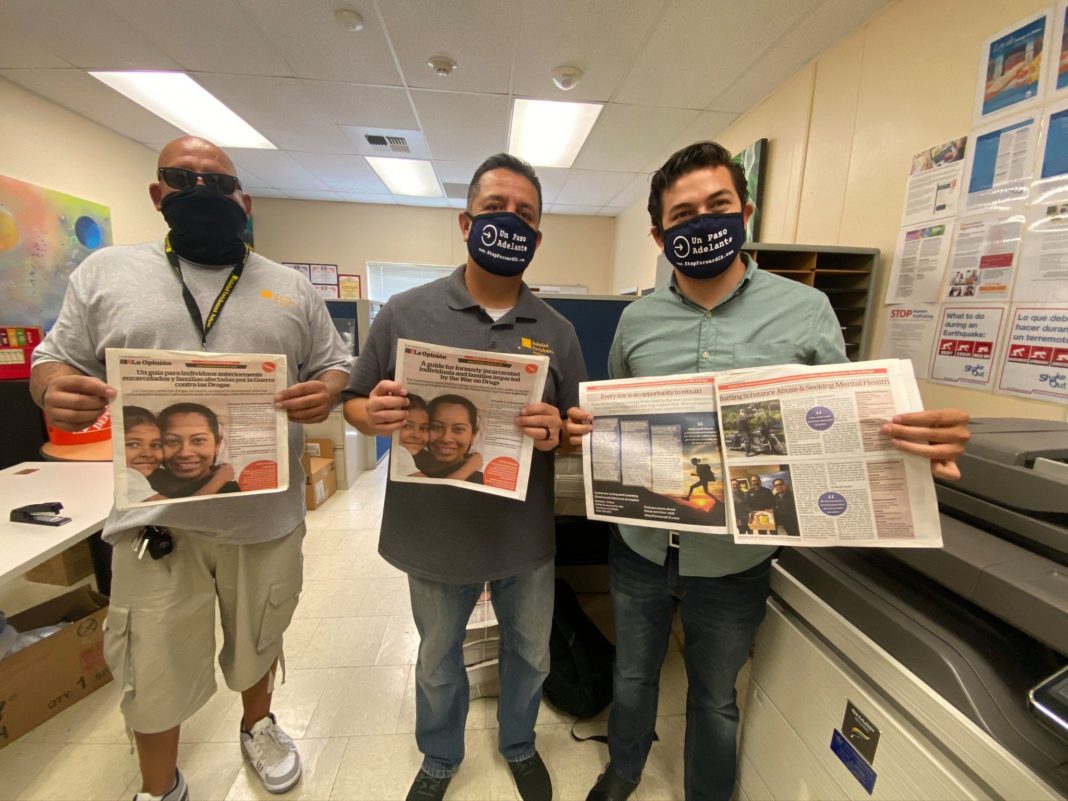 The programs are dedicated to helping people who for some reason have been incarcerated in the past.

On Thursday morning, a group of activists, elected officials, and organizations came together virtually to advocate for the well-being of people leaving California’s careles.

Some of the help comes through the One Step Forward resource guide and the StepForwardCA.com digital portal. The goal is to inform previously incarcerated people and their families about a network of community groups that can support them in their rehabilitation during their stable re-entry into society.

The project, created by the Latino Media Collaborative and California Black Media, has been great news for people like Andrés Zúñiga who served a 10-year sentence and was released last year.

He assured that despite preparing during his time in prison for a successful re-entry into society, it was not enough.

“I completed several vocational and continuing education courses. I was also lucky to obtain six associate degrees from two different universities, ”said Zúñiga. “But even with the hard work I did I still experienced a lot of uncertainties.”

Among them was how to get a stable home, where to get counseling and employment services among many other questions.

“It was an extremely overwhelming world for someone who was reintegrating into society again in search of a second chance,” said Zúñiga.

For his good luck, he managed to find the Center for Living and Learning, an organization that is responsible for helping disadvantaged individuals to enter the workforce and contribute to society. The center is part of the One Step Forward resource guide.

Zúñiga said he can now experience every day how favorable these resources are for the previously incarcerated population.

“This guide will help them fill that gap and direct them to valuable resources and organizations that are genuinely concerned, ready to help, ready to serve,” said Zúñiga.

Jesse Mendoza, who is coordinator at the Soledad Enrichment Action organization in East Los Angeles, said he knew first-hand about the change from being praised as a war veteran, but because of not receiving the necessary help he became a homeless and eventually jailed.

For him at that time, what helped him get ahead were faith organizations.

“They were the ones who approached me and helped me; I went through rehabilitation and over time, life began to change, ”said Mendoza. “After facing a 12-year prison sentence, a judge gave me one more chance and I think that opportunity was really an answered prayer.”

Mendoza obtained his bachelor’s, master’s and recently his doctorate. He said the resource guide will be very useful for many other people to get ahead more easily.

“An addicted, homeless war veteran will see that he is not alone,” Mendoza said. “That was something that was missing in my life, the human factor, a team behind me, someone who believed in me.”

Help in times of coronavirus

In California thousands of prisoners have been released, but in most cases there is no plan to re-enter society. Through a robust guide distribution plan, which includes partnerships with La Opinion and community organizations, this is expected to be a resource for thousands of Californians who will emerge from California jails in the coming months.

In the midst of COVID-19, this guide will reach homes and families facing housing insecurity, unemployment, health challenges, and a desire to reintegrate into society.

California Senator María Elena Durazo said that this year the state budget was not at all what they expected since everything changed due to COVID-19, but still the legislature struggled to protect programs they consider important.

“For example, $ 37 million in grants to support the reentry of offenders in transition from state prison to communities,” said Durazo.

Other protections the legislature fought for were tenant relocation protections for victims of violent crimes, keeping youth out of adult jails, no debt to themselves or their families, and the right to vote for men and women at large. conditional.

“In California, we want to truly be a state of opportunity, which means at the legislative level, but it also means resources,” said Durazo.

For more information on this guide visit: http://www.stepforwardca.com/es/los-angeles/

VIDEO: Fire breaks out in 25-story tower in Los Angeles

Lessons from an astronaut to cope with coronavirus isolation

Kendji Girac in concert in Miami