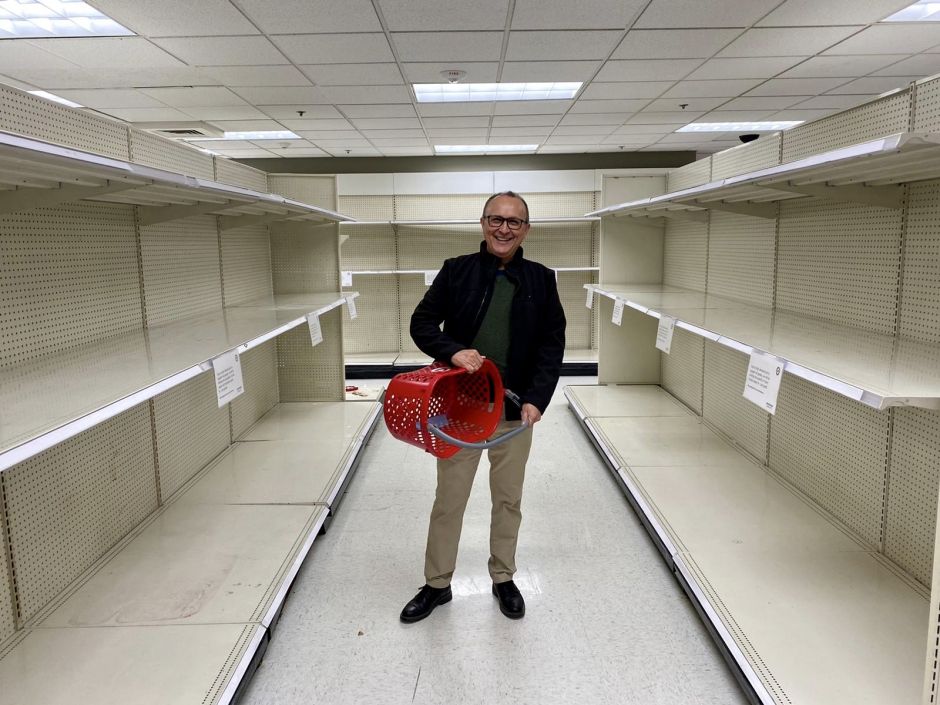 Everything is scarce, prices are rising and people have to queue for hours

Vicente García had tried to remain calm despite the increasingly worrisome news of the coronavirus, but when he heard President Trump declare the national emergency On Friday, March 13, she could no longer calm down.

"I couldn't focus on work. All I was thinking was that I had to go out and buy food, "says this Mexican immigrant, who lives in Pacoima, a neighborhood north of Los Angeles.

As soon as his workday ended, he went on a tour of several stores, only to find large lines up to a block to enter.

"Parking was impossible. It was very difficult to find a place to leave the car. I was going with my brother and I told him to get off so he could leave early, ”he recalls.

When he was finally able to enter the store, he found the place crowded. It was real chaos.

“The beans, rice and the cans of vegetables have already run out. Needless to say, chlorine. There was not. Only the most más feíto ’remained, cans of food that people do not want… celery soups or clams. I was able to buy canned beans and maseca to make tortillas, "he says.

A week earlier, she was able to stock up on enough rolls of toilet paper and water for her family. On that side, he was calm.

The coronavirus pandemic has caused Angelenos to rush to stores to stock their pantries, anguished because the food shortage worsens as the days go by, and they even fear a possible closure of markets.

As early as Saturday, March 14, the city of Glendale's Trader Joe’s store was closed the first hours of the day. Customers who arrived early, believing they could find a better assortment, were informed that they would open until noon because the food trucks had not arrived.

In other supermarkets, customers stood in long lines to enter, and were allowed to enter one by one every certain period of time.

"How long will this last? What is going to happen? How much longer are the stores going to be openVicente asked himself.

He managed to secure enough food for his six-member family for at least a month and a half, but he is concerned. "People are becoming increasingly aggressive," he says.

Lawsuits among consumers have been reported in many businesses, in the fight to take as many packages of toilet paper rolls and not want to share them. In these times of coronavirus, toilet paper has inexplicably become one of the most sought-after products in the United States.

Money is not enough

Monse Urías, who lives with her three children and her husband in Long Beach, managed to stock up for two or three weeks. "Nor can one buy food for longer because it is a lot of expense," he says.

On Friday March 13, it took almost two hours for him to enter the store The Superior. "There was no water, toilet paper, soups, beans, rice, or disinfectant or instant soups."

This whole situation has made him nervous. "I feel desperate, panicked. And then now even the children are out of school. Before at least you saved one lunch from them. With children at home, more is spent. The worst thing is that one does not find anything in stores; and prices have risen too much, "he observes.

Monse has a son with asthma, and that has made her feel even more mortified. "When there is an older adult, a pregnant woman or a person with chronic diseases, it is more difficult. You have to take care of them more. And to top it off, alcohol disappeared from stores, not to mention disinfecting towels. Let's just hope the handwashing soap doesn't run out"

They wipe with feminine towels

Lydia Barrón was shocked when she went to the supermarket in Northridge, a neighborhood in northern Los Angeles County, and found that There were no feminine towels and tampons.

The shelves were empty. I never thought that these products would be in such high demand these days, ”he says.

Lydia also went to the store to buy food for her dog. "She is almost exhausted. There was also no shampoo and soap for the body, no cans, no dry or canned food. ”

This mother of a family who lives with her daughter and her pet, says that although she wants to remain calm, she feels increasingly alarmed.

"It's a little frustrating. We don't know what's going to happen regarding food. We are in uncertainty. "

From store to store

With formal punctuality, Edilberto Ubaldo arrived at the supermarket at five in the morning Vallarta from the Sylmar community in Los Angeles. The store opens at 6:30 a.m. He wanted to be among the first, and he succeeded, but he did not find everything he wanted.

"Right now you buy what you find, not what you want and need. I bought loose beans of the Peruvian and pinto varieties. I brought the last thing left. I also bought toast, tomato sauces. Even that people were very friendly, "he says.

From Vallarta, he took off at full speed for the Costco store also in Sylmar.

“I arrived at 7:15 in the morning. The store opened at 9:30 a.m. The rows were huge. While we were waiting it rained, and I forgot the umbrella, "he says.

As he was about to enter, a middle-aged lady came and, making a pleading face, asked him to give her a chance to get in line.

Filled with anxiety, Edilberto answered him emphatically: "No ma'am! Get up early and 'queue' like everyone else!A peal of thunderous applause from the people lining up followed the firm response in recognition of not letting the woman sneak in.

When at last he was able to enter the megastore, he bought the most basic items, oil, chicken broth, tomato sauce. "There was no fruit, meat, eggs, or milk."

Edilberto confesses that he really feels that he is living a nightmare. "People are afraid. They think the world is going to end. I feel insecure. We do not know what will happen. If I get sick, I know I have to isolate myself, but I don't know what else I can do, ”he says, troubled.

Although you do not believe it

Rosa Higueras, who lives in Anaheim in Orange County, says that as she stood in a long line to buy a pantry, she watched an individual pay at the cash register for just three lemon squeezers.

“I don't know if this man was going to open a restaurant the next day, or why he wanted so many juicers. When we were all concerned about commodities, he only paid for his juicers. Those are the rare things that we are seeing today with the coronavirus crisis, ”he says.

Netflix presents documentary about the murder of the child Gabriel Fernández

There is more help for seniors and essential workers

They file charges against 60 Los Angeles businesses that ignored the...