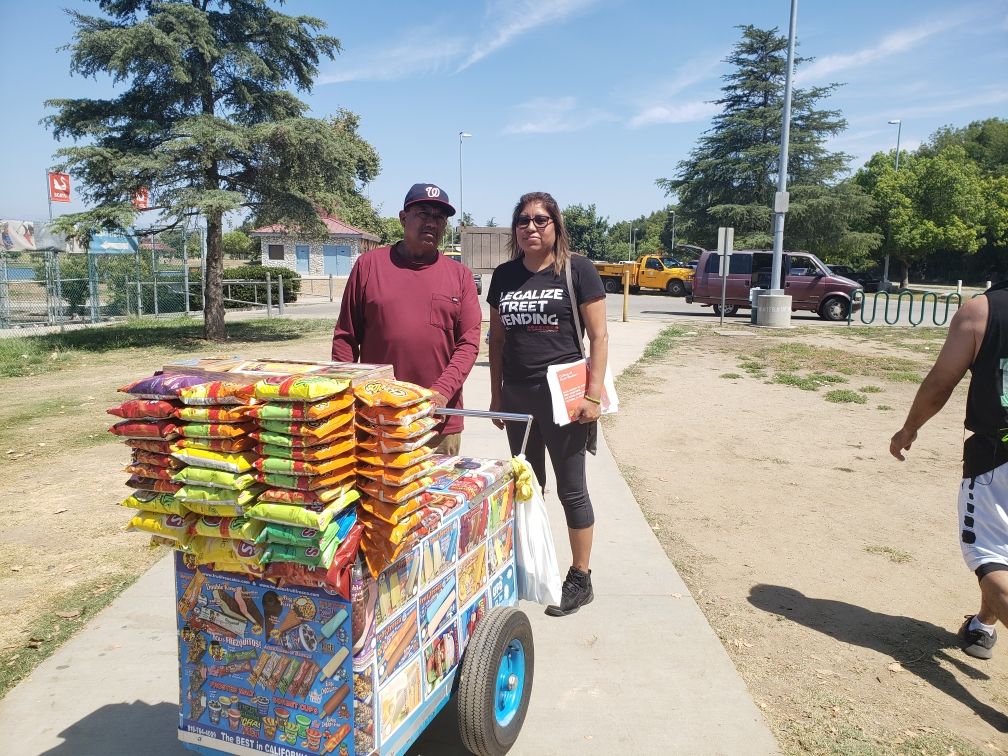 For many years, he has fought for the rights of others; now she has to fight for herself

Rosa Miranda has spent years fighting for the right of street vendors in Los Angeles to sell on sidewalks without being fined or exposed to losing their merchandise, but now the roles have been changed. It is the vendors themselves who have come to her defense to prevent her from being deported.

"I feel more hopeful knowing that my community is 100% with me. Although there are times when my brain betrays me and I feel sad. And is that half of my life is in this country. I've been here 21 years. My oldest son is a beneficiary of DACA (Deferred Action for Childhood Arrivals), ”says Rosa, whose fate is in the hands of a migration judge.

45 years old, she is married and the mother of three children, 26, 19 and 16 years old. The two youngest children were born in the United States. She left her native Hidalgo, Mexico to come to this country in 1999. Her husband had emigrated a year earlier. "We came in search of a better life, of the American dream ”, He says.

Her early years as an immigrant were devoted to being a mom, but always in the hope of immigration relief. "In 2009, my husband submitted a residency petition, he included me and the son who had been born in Mexico," she recalls.

But since she was already working at that time, the immigration lawyer they hired advised them that she should start another process, and suggested political asylum.

“The truth is that at that time we were terrified by the things that were happening in my town in Mexico where people were kidnapping. My own mother told me that if I had stayed there, because of my activism they would have already killed me ”.

Rosa says that they did not approve the asylum, but they gave him a work permit that he was renewing. "The lawyer explained to me that it was as if the case was asleep in court."

However, due to the limitations of just having a work permit, in 2013 her employer proposed to sponsor her so that she could obtain her residence.

“In February 2015, migration gave me three months to submit all the documentation I needed after being approved by the Labor Department. The problem was that the lawyer did not present the case to migration until March 2016, by then I had lost my job because the nonprofit organization I worked for ran out of funds, ”he says.

The result was that he was left without a sponsor and without the opportunity to fix his immigration status through a labor certification.

“I left that lawyer in July 2019 since I consider that she acted very negligently, not rushing to present the case, when I immediately gave her everything. He even questioned him about what is happening, and said "we are going to wait for the paralegal to return." He was in Russia caring for his sick mom, "he says.

Annoyed, she comments that she is even considering accusing her elaborate for negligence to the California Bar. "I was left owing $ 1,700 of the $ 2,300 I paid for the residency process."

Through her new lawyer, Rosa managed to reopen her case, and they have scheduled a trial to define her immigration status for March 21, 2021. Initially it was to be carried out on June 22, but was postponed by the pandemic.

“Actually, I am very afraid of being deported. My world fell apart when my husband was given the deportation letter. We have no savings", He says.

To top it off, the pandemic left her unemployed at the East LA Community Corporation (ELACC) where she worked as an organizer for street vendors. "Now I'm a volunteer," she says.

The new lawyer has told her that it will be the judge who decides her future. "He has told me that if he rules in favor of my deportation, I can appeal; and asks me to have faith because the laws can change at any time"

She also says that since she and her husband arrived in this country, they have paid taxes. “The migration environment is increasingly hostile. I don't understand why the laws don't support us to get out of the dark. We want to get out of the shadows ”, he exclaims.

After spending very depressed weeks, she was comforted to see letters of support from leaders across the country.

His former partner at ELACC, Sergio Jiménez wrote about Rosa to the immigration judge:

Through her vision, dedication, love, and passion for social justice, she has become a highly respected leader in Los Angeles, and is seen as a model within the street vendor movement for the support she has given them in the last four years. We would be devastated if her request is denied, because it is the pillar on which many people depend for guidance, support and is even a shoulder on which to cry, since she is always accessible to everyone. If anyone needs to continue in this country, it is Rosa Miranda"

Tragedy in Hemet: He tried to save his daughters. The 3...

In times of coronavirus you can make a difference by donating...

People with disabilities show their art at the LA City Hall