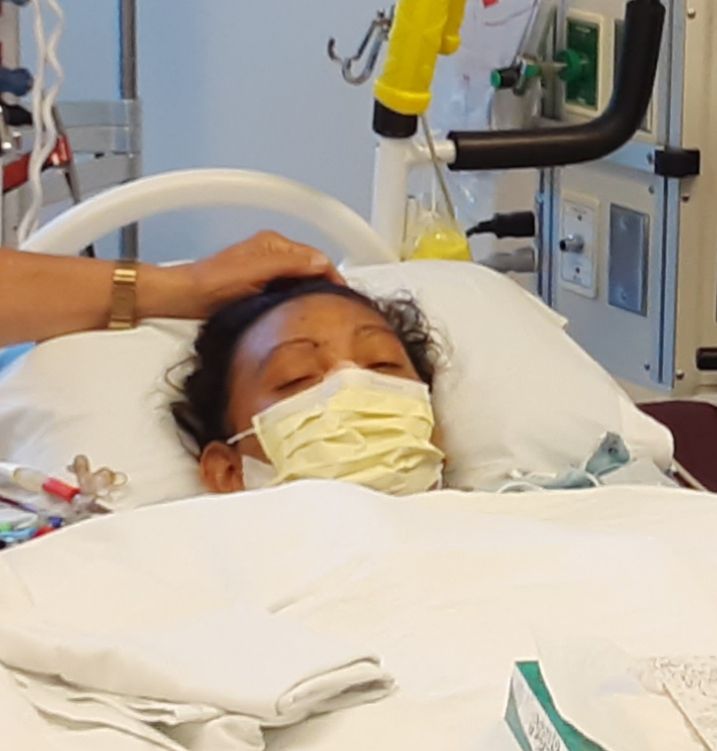 LOS ANGELES – Erika Murcia, a young mother is torn between life and death in the intensive care area of ​​UCLA’s Ronald Reagan Hospital. His life depends on a liver transplant, but an administrative rule imposes six months of punishment to receive it due to his problems with alcoholism.

“This rule without any logic keeps my daughter on the brink of death,” says Julio Murcia, Erika’s father.

“They consider it responsible for their own illness, alcoholism, ignoring that many people take refuge in alcohol for a penalty, a problem, harassment, or simply as a form of escape,” he says.

Erika is 30 years old. She is the mother of Nathan, 6, and Delylah, 2. Born in the United States, the daughter of parents who emigrated from El Salvador, she studied as a medical assistant and nurse.

“Unfortunately two years ago she got together with a vicious man who did not work. We don’t know what kind of life she lived with him. It is probable that she drank during that time, we do not know, but it is possible that she was unaware of her situation and that made it worse, ”says the distraught father.

On July 11 they were notified that Erika was in very serious condition at the Los Angeles Presbyterian Hospital. The next day she was transferred to Reagan Hospital at UCLA.

“The diagnosis was cirrhosis, and the only way to be saved is a liver transplant. For now they have her tubed and under sedation”.

When she could still speak, her daughter told them that instead of encouraging her, the doctors and social workers would say phrases such as: “You have so much time to live”; or “Say goodbye to the people who love you.” On the contrary, she comments that the nurses have motivated and comforted her. “They have been very nice to her.”

Overwhelmed by feelings, Julio regrets that an administrative rule decides who lives and who dies.

“A recent pilot study showed that early liver transplantation improves survival of patients with a first episode of alcoholic hepatitis serious that does not respond to medical therapy, ”he says.

And he regrets that doctors lose humanity. “That’s terrible. Doctors take the Oath of Hippocrates and promise to put life before any other interest, ”he says.

Note that they forget that governments allow, and in some cases encourage, alcohol consumption because it is a huge profit in taxes and fines. “Then sadly they ignore the people who have fallen into the clutches of this vice.”

He is confident that he and his wife are completely dejected: “We have written to Governor Gavin Newsom and Mayor Eric Garcetti for help. We feel so bad that on many occasions my wife and I have returned home from the hospital, crying our eyes out in the car. My daughter is young. Children are supposed to bury their parents, not their parents. ”

Erika is the youngest of two children of the Murcia couple, who have taken care of their two grandchildren. “Social Services asked us if we could take care of the children, and of course we could.”

Julio even offered to donate part of his liver to his daughter, but due to his age, 75, he was not considered. “I already lived, I just want my daughter to live,” he says. And she explains that the liver breaks in half at the time of a donation, and that organ is rebuilt.

“My wife Roselia cannot donate because she has a fatty liver, and she has never drunk.”

Julio has come to wonder if his daughter’s problem will not be hereditary, since her grandfather died of alcoholic problems.

Enrique Rivero, spokesman for UCLA’s Ronald Reagan Hospital said that due to patient privacy laws, UCLA Health does not discuss whether a specific person has been treated or evaluated. “UCLA Health is very successful in ensuring the highest probability of success with transplants and therefore making the best use of the limited number of donated organs.”

But he made clear that patients with a history of substance abuse are required to demonstrate six months of sobriety before receiving a transplant. “Six months is a normal period of time and it is the time that most insurers demands “.

Afrolatina who was undocumented seeks to be a Los Angeles councilor

Marc Rochet, president of French Bee: "lower prices by 15% on...

Aid to SMEs and visas: the US administration changes its mind

Charlotte Gainsbourg awarded at the FIAF Gala in November